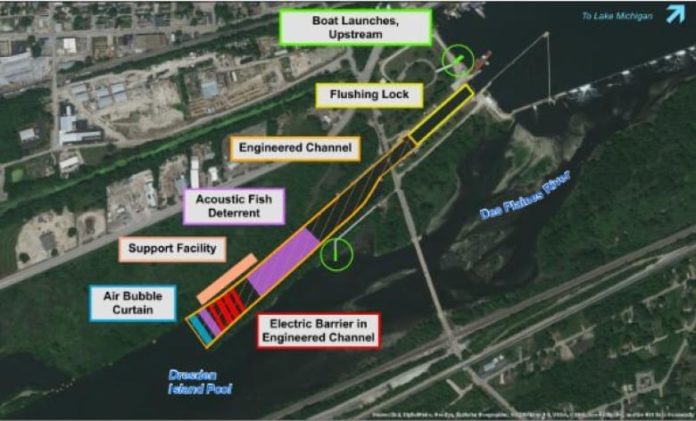 Mayors from Canada and the United States have called again for immediate action to fight the threat of Asian carp in the Great Lakes waterways.

The Great Lakes and St. Lawrence Cities Initiative (GLSLCI) submitted comments to the United States Army Corps of Engineers asking for waterway barrier plans to be sped up.

The letter from the initiative, submitted Feb. 22, was specifically about the Brandon Road Lock and Dam in the Chicago area. A report released in 2014 identified creating a barrier in this area as crucial to stopping Asian carp from entering the Great Lakes systems. The corps issued a feasibility study in 2017 that lists six options for preventing the fish from moving upstream, but nothing has been implemented. 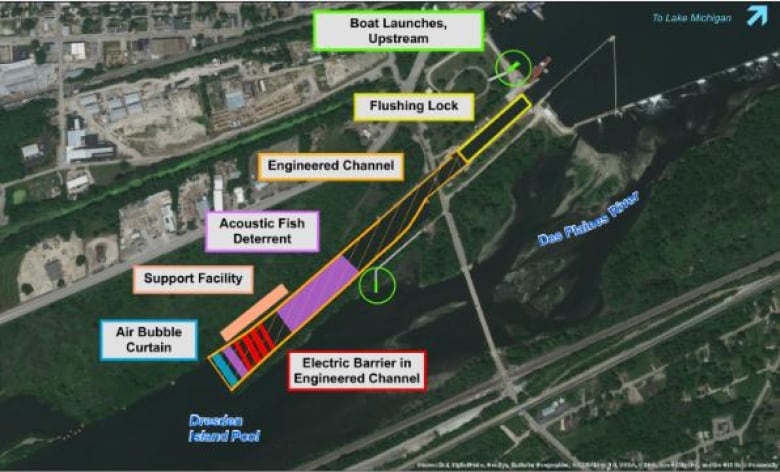 The six options discussed include an air bubble curtain, an acoustic barrier and an electric barrier. (US Army Corps of Engineers)

“The plan to create another barrier that would help to hopefully prevent Asian carp from getting in the Great Lakes, it’s taking way too long,” said John Dickert, president of the GLSLCI. “It’s delay after delay after delay. The mayors have had enough.”

Dickert said the mayors recognize it would be a $7-billion-a-year loss if the Asian carp were to get into the Great Lakes.

“We’re concerned about the delays. The conversation started over a decade ago.”

Chatham-Kent Mayor Darren Canniff called Asian carp the “most significant threat to the health of the Great Lakes.

“If Asian carp aren’t stopped now, we are risking billions of dollars to the provinces and states along the Great Lakes.”

Alternatives to dealing with invasive carp

According to Dickert, things the corps have discussed include electrical fences and underwater barriers, but the initiative wants the corps to look at other alternatives.

“There are a number of scientists looking at different alternatives to what the former governor of Illinois thought, which was to catch more fish. We disagreed with that, we don’t think that is a remedy. What we’re looking for is a temporary solution.”

Every year or two, said Dickert, more potential solutions come up — and every possibility for stopping Asian carp should be considered.

“If you’ve got a virus remedy … we’ve heard of a gene that makes fish sterile or eradicating them through chemical useage … whatever the case is, that should be on the table,” said Dickert.

The United Nations Environment organization in Iraq finished an investigation into the death of millions of farmed carp in Iraq in 2018. The conclusion was the Koi herpes virus caused a widespread cull of the carp.

In Australia, research is underway to use a similar virus to tackle the invasion of European carp, which causes probelms in the Murray-Darlin Basin in Australia.

“Current research has also shown that the virus does not develop in native Australian or any other introduced species of fish,” said study results, adding the virus kills Australian pest carps quickly.

Members of the UN Environment team who studied the virus in Iraq said using this kind of virus was not a good idea.

“My gut feeling is this is not good,” said Dr. Melba Reantaso, who studies aquaculture and fish health.

Asian carp are some of the most robust fish in the waters.

Asian carp prefer cool water temperatures like those found near the shores of the Great Lakes. (CBC)

“It’s a lot of work to keep up with eight states and two provinces, not to mention two countries,” said Dickert, but he added that the biggest challenge was “people who don’t take responsibility for difficult decisions.”

The GLSLCI is made up of more than 100 mayors from Canada and the United States, representing 17 million people who live around the Great Lakes.

Dickert said it doesn’t matter how difficult it is to co-ordinate — they owe it to the next generation to take action.

“The Great Lakes are on the brink right now,” said Dickert. “We’re not going to wait. We’re going to keep pushing this along.”

The initiative has put out letters to the governors of all eight states asking for support.