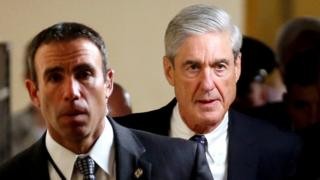 A special counsel investigating claims of Russian meddling in the US election has reportedly impanelled a grand jury.

The reports by the Wall Street Journal and Reuters news agency suggest Robert Mueller’s inquiry is heating up.

Reuters reports the jury has issued subpoenas over a June 2016 meeting between President Donald Trump’s son and a Russian lawyer.

The president has poured scorn on any suggestion his team colluded with the Kremlin to beat Hillary Clinton.

In the US, grand juries are set up to consider whether evidence in any case is strong enough for the issuing of indictments to proceed to a criminal trial. They do not decide the innocence or guilt of a potential defendant.

It also allows a prosecutor to issue subpoenas, a legal writ, to obtain documents or compel witness testimony under oath.

With the news that a grand jury has been convened in Washington DC, and that it is looking into the June 2016 meeting between Donald Trump Jr and Russian nationals, it’s clear the investigation is focusing on the president’s inner circle.

This news shouldn’t come as a huge shock, given that Mr Mueller has been staffing up with veteran criminal prosecutors and investigators. It is, however, a necessary step that could eventually lead to criminal indictments. At the very least it’s a sign that Mr Mueller could be on the trail of something big – expanding the scope beyond former National Security Adviser Michael Flynn and his questionable lobbying. It also indicates his investigation is not going to go away anytime soon.

In the past, when big news about the Russia investigation has been revealed, Mr Trump has escalated his rhetoric and taken dead aim at his perceived adversaries. The pressure is being applied to the president. How will he respond?

Mr Trump is due to address a rally in Huntington, West Virginia, on Thursday evening.

Ty Cobb, a lawyer appointed last month as White House special counsel to field questions in the Russia inquiry, said there is no reason to believe the president himself is under investigation.

Reacting to the grand jury reports, Mr Cobb said in a statement: “The White House favours anything that accelerates the conclusion of his work fairly. The White House is committed to fully co-operating with Mr Mueller.”

The measures were submitted amid concern the president might dismiss Mr Mueller, as he fired former FBI director James Comey in May, citing the Russia inquiry in his decision.

The US intelligence community, including the CIA and NSA, has determined that Russia sought to boost Mr Trump’s chances of victory in November 2016 presidential election, which Moscow denies.

Mr Trump has at times expressed doubt about the determination made by his own intelligence agencies.

Mr Mueller was appointed in May by the deputy attorney general of the Department of Justice.

The US first son’s emails show that he was told the meeting would yield damaging material on Mrs Clinton, provided by the Kremlin.

Mr Trump and his aides have dismissed the encounter as “opposition research” that happens in any political campaign.

Mr Trump Jr’s initial, misleading statement – that the meeting was about Russian adoptions – was issued with the president’s advice.