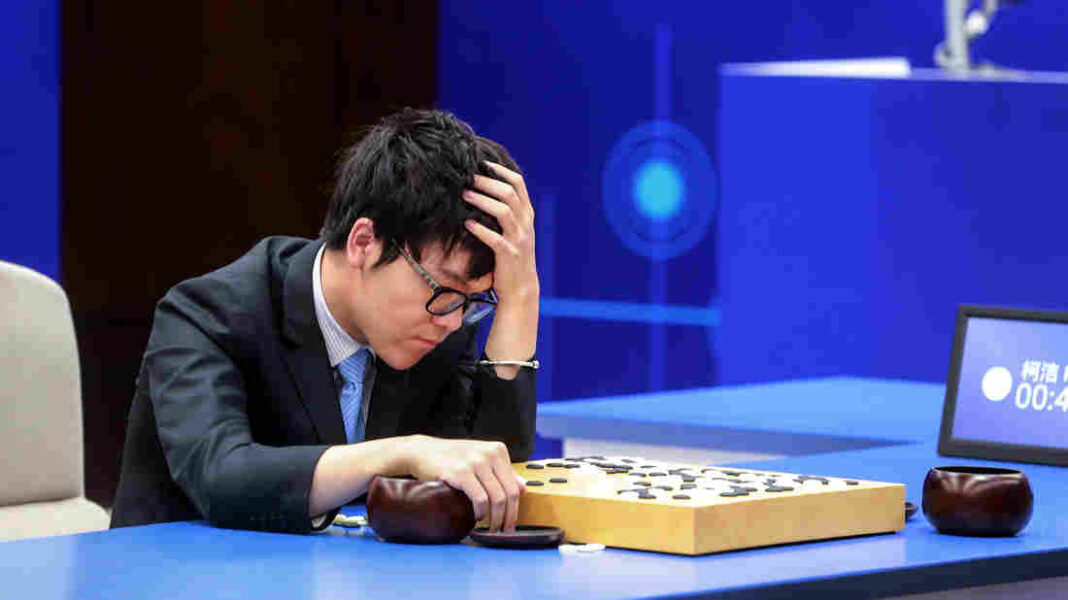 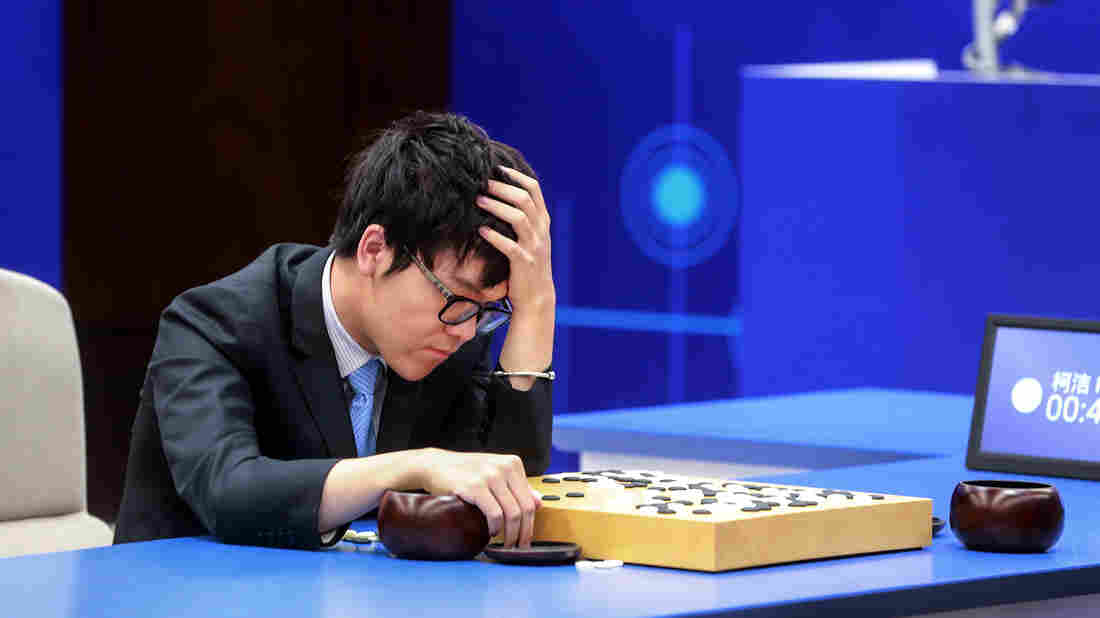 Ke Jie, the world’s No. 1 Go player, stares at the board during his second match against AlphaGo in Wuzhen, China, on Thursday. The 19-year-old grandmaster dropped the match in the best-of-three series against Google’s artificial intelligence program. AFP/Getty Images hide caption

Ke Jie, the world’s No. 1 Go player, stares at the board during his second match against AlphaGo in Wuzhen, China, on Thursday. The 19-year-old grandmaster dropped the match in the best-of-three series against Google’s artificial intelligence program.

Sure, it’s not the singularity (yet) — but it is a rather singular achievement.

AlphaGo, an artificial intelligence program developed by Google’s DeepMind lab, did not even need a third game to display its dominance over the world’s best (human) Go player. On Thursday the A.I. defeated Ke Jie in Wuzhen, China, repeating its victory of two days ago and clinching a best-of-three series against the 19-year-old wunderkind.

Ke has one more chance to redeem himself, on Saturday, though if the first two matches are any indication, is chances don’t look good.

That’s not to cast aspersions on Ke’s play. Quite the opposite, in fact. In a blog post Thursday, DeepMind called the match “a stunning work of art.”

“According to AlphaGo’s estimation of the match, the programme assessed the first 50 moves as virtually perfect,” the post read, “and the first 100 moves were the finest anyone has ever played against the Master version of AlphaGo.”

Yet it was not enough for Ke to beat this relative newcomer to the ancient board game, which has been around at least two millennia and enjoys enduring popularity in China, South Korea and Japan. DeepMind pursued mastery in the game notorious for its complexity, exceeding even that of chess. Lab founder and CEO Demis Hassabis says the number of possible positions in a game of Go outnumber the atoms in the universe.

“From the perspectives of human beings, he stretched a little bit and I was surprised,” Ke said of his inhuman opponent at a news conference after Thursday’s game.

“I also thought I was very close to winning the match in the middle of the game, but that might not have been what AlphaGo was thinking,” he continued. “I was very excited, I could feel my heart thumping!”

The drama on the board did not unfold on broadcast, however.

Google has for years borne a fraught relationship with China, where the company’s services have been unavailable since a 2010 dispute over the country’s censorship policies. And that strain was on full display again this week, even as the game was not: Websites in China were not allowed to live-stream the match, according to apparent state instructions published by China Digital Times.

“This match may not be broadcast live in any form and without exception, including text commentary, photography, video streams, self-media accounts and so on,” the instructions read. “No website (including sports and technology channels) or desktop or mobile apps may issue news alerts or push notifications about the course or result of the match.”

At least two more matches await AlphaGo later this week: one more Saturday against Ke, for good measure, and another on Friday in which the program will take on a gang of five of the world’s best players working together.