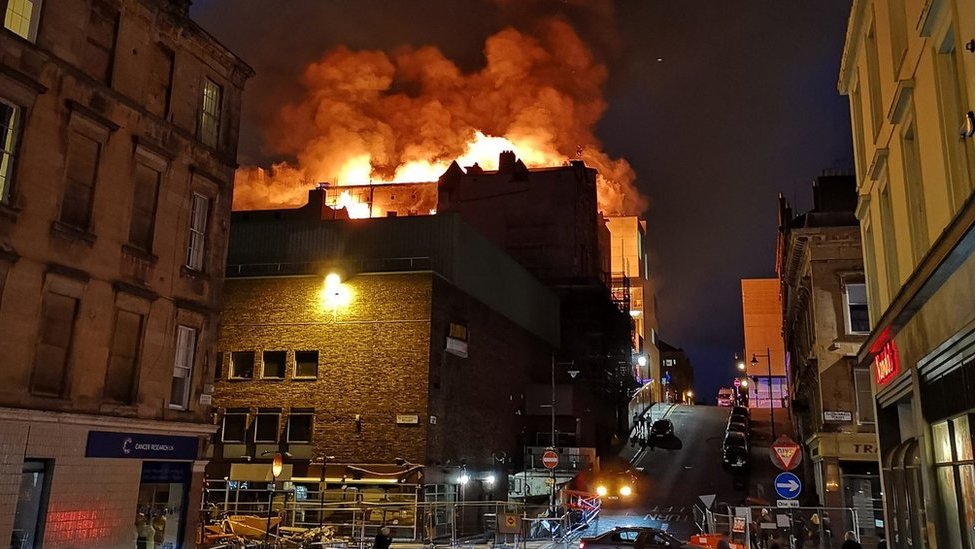 A large fire has broken out at the Glasgow School of Art for the second time in four years.

Flames and plumes of smoke engulfed the world-renowned Mackintosh building in the city centre.

Nearby buildings have been evacuated as fire crews tackle the blaze, which spread “in the space of a few minutes” when it started just around 23:15 BST.

A Scottish Fire and Rescue Service spokeswoman said no casualties had been reported.

“A number of engines” were sent to the scene, where more than 60 firefighters were “working hard to extinguish the well-developed” blaze, she added.

The building was ravaged by fire in May 2014 and was due to re-open next year following a multi-million pound restoration project.

Ben, an eyewitness, told the BBC the latest fire looked “much worse” than the previous one.

“This is a blaze, the building is just going up like a tinder-box. It’s quite shocking,” he said.

Connor Neil, 22, said people were being evacuated from their homes and there was a “big orange light” which could be seen from streets away.

The blaze has completely engulfed the Mackintosh building once again. The building was still a construction site from the fire four years ago.

Loud bangs can be heard coming from inside as crews try to tackle the flames.

Students – some of whom graduated today – are in the street in shock. They can’t believe it’s happened again.

Police Scotland advised the public to avoid the area, and said areas around Dalhousie St, Scott St and Sauchiehall St were all affected by road closures.

The Labour politician said the restoration effort had suffered a “horrific setback” which he hoped would be overcome.

“We cannot lose this building,” he added.

Devastated that a major fire has broken out at the Glasgow School of Art tonight. The Mack has been undergoing restoration since the last devastating fire in 2014. @scotfire_glasgo are doing everything they can to salvage the most architecturally important building in Glasgow.

In a tweet, Scottish First Minister Nicola Sturgeon said: “This is clearly an extremely serious situation.

“My first thoughts tonight are for the safety of people – but my heart also breaks for Glasgow’s beloved @GSofA.

“Once again, we are indebted to the bravery of our firefighters and other emergency services.”

Once again, we are indebted to the bravery of our firefighters and other emergency services. This is clearly an extremely serious situation. My first thoughts tonight are for the safety of people – but my heart also breaks for Glasgow’s beloved @GSofA https://t.co/G0adVwlF20

The Mackintosh building was completed in 1909 based on designs by Charles Rennie Mackintosh, Scotland’s most-lauded designer.

It has been described as “a working art school as well as a work of art”, and has an A-list rating from Historic Scotland.

In recent years, the school has produced many of the UK’s leading contemporary artists such as Douglas Gordon, David Shrigley, and three recent Turner Prize winners: Simon Starling in 2005, Richard Wright in 2009 and Martin Boyce in 2011.

The fire in 2014 destroyed the building’s library, which was recognised as being one of the finest examples of art nouveau in the world.