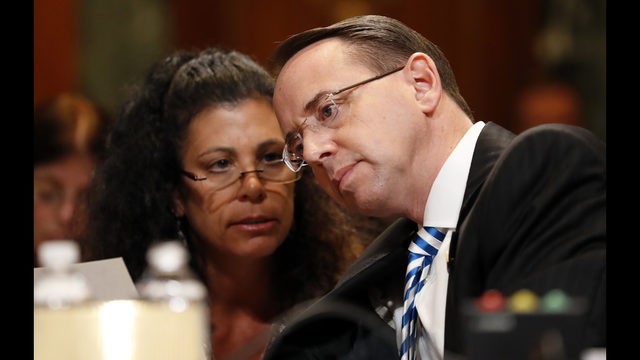 RICHMOND — Alarmed that Ed Gillespie barely won the Virginia GOP primary for governor in June, top Republicans from the White House on down are pushing him to hire some of the president’s strategists and more aggressively court Trump voters, according to Republicans with direct knowledge of those efforts.

In addition, the Republican National Committee has taken charge of field operations for the Gillespie campaign, according to two Republicans who called it a sign the national party is worried about Gillespie’s team..

Aligning with Trump strategists could be a stomach-churner for Gillespie, whose résumé reads establishment Republican: counselor to President George W. Bush, former Republican National Committee chairman, lobbyist. Gillespie got behind Trump only after he had sewn up the 2016 nomination. Now, he studiously avoids discussing the president.

Running a campaign in the Trump style could be risky in purple Virginia, the only Southern state Hillary Clinton won, and a place where Trump’s approval rating sat at 36 percent in a May Washington Post-Schar School poll.

So far, Gillespie has resisted the advice — to the chagrin of activists who say his campaign desperately needs shaking up.

The course Gillespie takes will have meaning not only in November but also in 2018, when scores of other Republicans running for state and federal offices in swing districts across the country try to win over Trump voters as well as those repelled by the president.

“Gillespie is the next Republican candidate to wrestle with the factions of the Republican Party and the challenge of also needing independent voters,” said Nathan L. Gonzales, editor of the nonpartisan Inside Elections.

John Fredericks, the host of a conservative radio show who helped run Trump’s Virginia campaign, has urged Gillespie to add advisers who know how to reach Trump voters.“If they don’t figure this out, it can cost them the election,” he said.

In the primary, Gillespie was strongest in northern Virginia but lost the largely white, rural vote in Southwest and Southside Virginia – Trump country – to his GOP rival, Corey Stewart.

Still, GOP strategists critical of Trump say Gillespie, who has the support of 91 percent of Republicans in a recent Quinnipiac University poll, would be smart to keep his distance.

“Ed is going to have a difficult enough time winning with Trump in the White House,” said John Weaver, chief strategist for Ohio Gov. John Kasich’s 2016 presidential bid and a longtime adviser to Sen. John McCain (R-Ariz.). “Adding Trump’s bullying, foolish staff — who focus on narrow casting and messaging to the lowest common denominator — would dramatically decrease Ed’s chances in a state, as a Republican, where you have to build a broad coalition in order to win.”

Gillespie campaign spokesman David Abrams did not respond directly to questions about outreach from the White House and others. He issued a brief statement that sought to shift the focus to Gillespie’s Democratic opponent, Lt. Gov. Ralph Northam.

“Ed is working hard every day to earn the support of everyone who will be hurt by Ralph Northam’s liberal agenda,” it said, noting that the campaign expects to expand staff as a part of a post-primary scale-up, not a course correction.

The six — a mix of Richmond and Washington political operatives and party insiders — spoke on condition of anonymity to discuss sensitive campaign matters.

To date, Gillespie has run a mainstream Republican campaign, the centerpiece of which is a 10 percent income tax cut. He supports gun rights and opposes abortion but has downplayed social issues.

He has avoided the “Southern heritage” issues that Stewart nearly rode to victory. While Stewart decried Charlottesville’s plans to remove a Robert E. Lee statue, Gillespie said he opposed removal but thought it was the city’s call. As Stewart vowed to jail “sanctuary city” mayors, Gillespie said he wanted to be a “governor for all Virginians.”

Gillespie was mum on Trump’s travel ban and his firing of FBI director James Comey. He has refused to take a position on the GOP health care plans pending in Congress, although he did roll out a proposal to address the state’s opioid epidemic on Tuesday.

Some Republicans say Gillespie should take harder line against illegal immigration and the protection of Confederate monuments. Others say his positions are already sufficiently conservative but he should sharpen his tone.

And still others say Gillespie must demonstrate support for Trump – or at least White House policies that play well in the state, such as efforts to improve the Veterans Administration, ease regulatory burdens on coal and other industries, and boost infrastructure spending.

“…When there are Trump administration initiatives that are particularly beneficial to Virginia, he should say, ‘This is good. I endorse it,’ ” Allen said.

The White House has offered to dispatch Trump family members to stump for Gillespie, but so far he has not accepted, according to one Republican familiar with the discussions.

“He’s surrounded himself with ‘Never Trumpers’ and they don’t know how to navigate this new dynamic in the party,” said a Republican familiar with the outreach. White House officials “want to help and they want to embrace, but you’ve got to want to be hugged. You can’t blanch.”

Wendell Walker, the party’s vice chairman for the western half of the state, left convinced that the campaign was listening. But others fear the campaign remains overconfident.

“I feel like I’m on the Titanic right now,” one Republican insider said. “We’re about to hit an iceberg. ‘Hey, we need to turn!’ You got the current Ed Gillespie team saying, ‘Nah, hold my beer, we got this.’ ”

The RNC has long played a part in field operations for various campaigns but is taking a more forceful role than usual in Virginia, calling shots more than collaborating, according to two people with direct knowledge of the arrangement.

Garren Shipley, Virginia spokesman for the RNC, called the ground game “a collaborative effort” among the RNC, the Republican Governor’s Association, state party and campaign. “Everyone quite literally has a seat at the table,” he said.

Gillespie was expected to handily win June’s primary. But he finished just 1.2 percentage points ahead of Stewart — almost recount territory.

The next day, a handful of Republicans asked Lewandowski whether he would meet with and consider advising Gillespie, two Republicans with direct knowledge of the effort said. Lewandowski agreed but Gillespie was said to have flatly rejected the idea. Lewandowski declined to comment.

Others have suggested that Gillespie tap different Trump operatives, including those who helped him win tough battles in Ohio, Michigan, Pennsylvania and Wisconsin.

“No one’s pushing one particular person,” said a Republican familiar with the efforts. “The message that has been delivered by multiple people is, ‘Ed, just bring somebody in from Trump world who understands Trump.’ ”

Virginia is a swing state, but one that increasingly leans blue. Republicans have not won a statewide election since 2009. Gillespie came close to unseating Sen. Mark R. Warner (D-Va.), a highly popular former governor, in his first bid for elective office in 2014. Leading Gillespie’s Senate bid was Leavitt, his current campaign manager.

Gillespie will need Republicans of all stripes — plus independents — to have any hope of overcoming the advantage Northam has in the state’s heavily Democratic population centers.

Some are urging Gillespie to make peace with Stewart, who never made a concession call.

White House press secretary Sean Spicer said he spoke to state party leaders after the primary “about the need to unify up and down the ticket.”

But an attempt by a mutual friend to bring them together recently fell apart. Stewart has said he will vote for Gillespie but won’t endorse him without more forceful stands on Confederate monuments, illegal immigration and other issues. “Maybe take some testosterone supplements and just get out there and start beating the hell out of Northam,” said Stewart, who has mocked Gillespie as “Establishment Ed” and called his stump speeches “boring.”

Gillespie has adopted a more aggressive tone lately. Ahead of July 4, he called for legalizing bottle rockets and Roman candles — an effort to appeal to liberty-minded voters – in a video that showed him lighting fireworks and dashing to safety.

[With fireworks, Ed Gillespie tries to light a fire under his bid for Virginia governor]

Stewart sees that as the sincerest form of flattery — and a good sign.