Germany made it through to their first Confederations Cup final with a 4-1 victory over Mexico in Sochi on Thursday night.

Leon Goretzka scored two goals in the space of three minutes early on, the first a sweeping finish from 20 yards, before slotting past Guillermo Ochoa from inside the box.

Timo Werner finished off a nice team move to make it 3-0 after the break (59), and though Marco Fabian’s stunning 30-yard strike threatened to make things interesting late on, sub Amin Younes rounded off the win at the death for Germany. 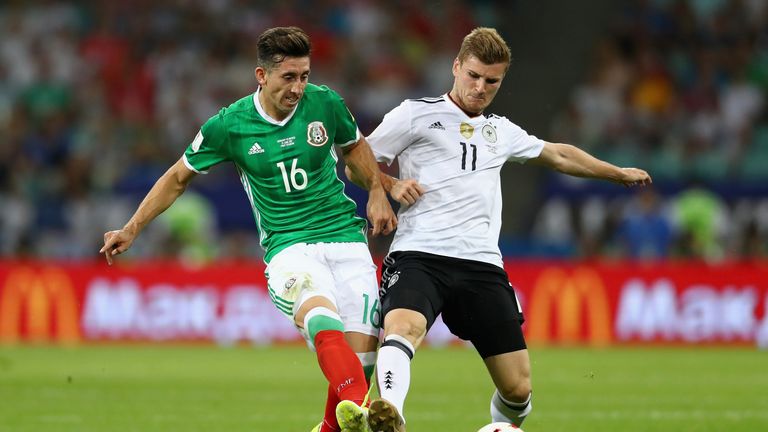 Hector Herrera and Timo Werner compete for the ball

Joachim Low rotated his starting line-up once again, making five changes from the side that beat Cameroon. Giovani dos Santos and Javier Hernandez started for Mexico.

Joachim Low’s side will play Chile in Sunday’s final in Saint Petersburg, and you can follow updates on SkySports.com.

Schalke midfielder Goretzka, who has been linked with a move to Arsenal, finished off from the edge of the box from Benjamin Henrichs’ low ball from the right in the sixth minute, finding the bottom left corner with a fine first-time effort.

Two minutes later it was 2-0 through Goretzka again, beating a high Mexico defensive line to latch onto Werner’s through ball and finish into the bottom corner again.

Werner came close having got in behind the back of Mexico’s defence, before Giovani dos Santos forced Marc-Andre ter Stegen to save well with his feet and Javier Hernandez’s deft touch went just inches over the Germany bar. RB Leipzig forward Werner had another fine chance to score after the break after being played through by Henrichs, but could only find the feet of Ochoa from an angle.

But Werner did make it 3-0 shortly after, tapping into the empty net after a nice move involving captain Julian Draxler and Jonas Hector.

Mexico piled the pressure on late in the game, hitting the bar through Raul Jimenez’s header, and they finally got their goal through Fabian, who struck into the top corner from fully 30 yards after Hector Herrera had touched on a free-kick.

But as Mexico looked for a second, Germany hit Mexico on the break again and scored a fourth through Younes, finishing from an angle with his left foot, low into the far corner.

Man of the match – Leon Goretzka

Mexico put out the red carpet for Goretzka early on, allowing him acres of space twice in three minutes as Germany raced 2-0 ahead before the blink of an eye.

But Goretzka’s first finish was a beauty, sweeping into the bottom-right corner as the ball came across his body.

The 22-year-old Schalke midfielder has been linked with a move to Arsenal, but he’s put himself in the shop window for plenty of other suitors with his performance in Sochi on Thursday night.

Germany will play Chile in Sunday night’s final in Saint Petersburg, while Mexico will face Portugal in the third place play-off in Moscow, earlier on Sunday.