Gerard Butler: My Home in Malbu Is ‘Half Gone’: Photo 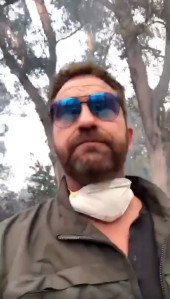 Returned to my house in Malibu after evacuating. Heartbreaking time across California. Inspired as ever by the courage, spirit and sacrifice of firefighters. Thank you @LAFD. If you can, support these brave men and women at https://t.co/ei7c7F7cZx. pic.twitter.com/AcBcLtKmDU

Gerard Butler has joined the growing ranks of celebrities whose homes have fallen prey to the California wildfires.

The Hunter Killer actor, 48, shared a photo of himself in front of a charred vehicle and a building structure that was once his Malibu home to both Instagram and Twitter on Sunday, November 11.

“Returned to my house in Malibu after evacuating,” he wrote. “Heartbreaking time across California. Inspired as ever by the courage, spirit and sacrifice of firefighters. Thank you @LAFD. If you can, support these brave men and women at SupportLAFD.org.” 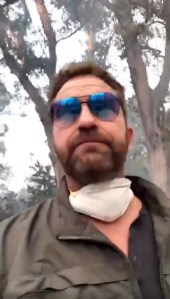 He also gave fans a look around the still-smoldering property on Instagram Stories on Sunday. “Welcome to my home in Malibu,” he said. “Half gone. Wow.”

Earlier on Sunday, Camille Grammer revealed that her $3.2 million Malibu mansion had also gone up in flames. “Sadly my house couldn’t be saved,” the Real Housewives of Beverly Hills star, 50, wrote on Instagram.

One day prior, Robin Thicke and his pregnant girlfriend, April Love Geary, shared the news that they had lost their home, which Thicke reportedly purchased for $2.4 million in 2016. Geary posted a shot of their former residence on Instagram Stories on Saturday, November 10. “Our house is gone,” she wrote.

Caitlyn Jenner’s Malibu mansion was widely reported to have been destroyed, but photos taken on Saturday, November 10, showed the home intact.

The Associated Press reports that 23 people have died in the California fires that have led to the evacuation of more than a quarter of a million people.