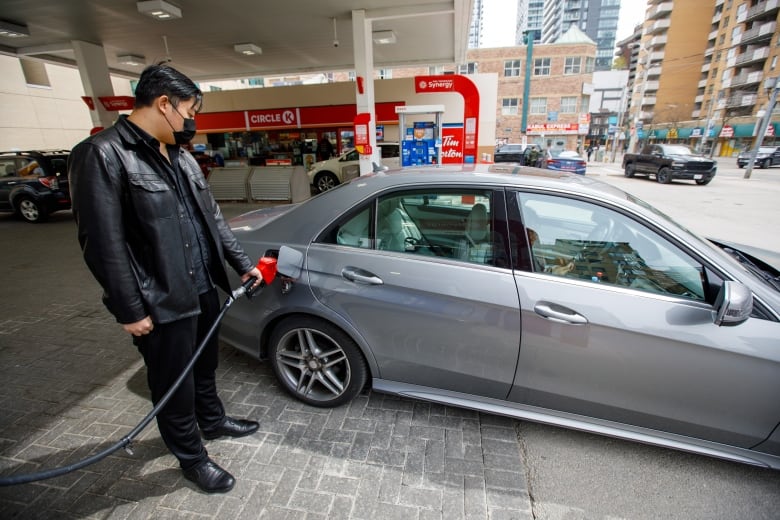 Canadians in most parts of the country are waking up to higher gas prices today, with prices either above $2 a litre or creeping close to that benchmark.

According to Gas Wizard, a site that tracks gas prices across Canada, prices have jumped by four to six cents in many urban centres across the country. In Vancouver, the price of regular gasoline reached $2.17.

Prices on the Prairies have remained unchanged over the last day.

“The average in Canada is going to get a lot closer to that $2-a-litre psychological barrier, if you will. And it’s not likely to end there any time soon,” Dan McTeague, president of Canadians for Affordable Energy, told CBC News.

Gas prices have risen rapidly over the last year, with the Russian invasion of Ukraine exacerbating the trend. Last May, the average gas price in Canada was $1.32.

While there are several factors that contribute to the price of gas, the largest driver of what people pay at the pumps is the price of crude oil, says Vijay Muralidharan, director of consulting at energy analytics firm Kalibrate in Calgary.

“The crude pricing, it’s not a new phenomenon,” said Muralidharan, adding that the market was tight before the war in Ukraine.

With the start of “driving season,” prices were expected to jump as they historically do between the months of April and September, he said.

Another factor driving gas prices, according to Muralidharan, is the global shortage of diesel, which has pushed up prices significantly. Given that gasoline and diesel are both produced from crude oil, the price of one naturally drives the price of the other. Otherwise, producers would focus on producing diesel, he said.

“To produce more gasoline, the margin of gasoline should match diesel,” said Muralidharan.

Diesel prices are well above $2 in most parts of the country. In St. John’s, the price of diesel sits at $2.73.

All Canadians are being impacted by the rise in fuel prices, McTeague said, regardless of whether they drive or not, given that goods are transported by vehicles that rely on diesel.

Truckers in Moncton have noticed the sharp increase in the cost of filling up their tanks. Danny Douthwright drives from Moncton to Prince Edward Island hauling fries for McCain’s twice a day. Every three days, he says he fills up $800 worth of fuel.

In Toronto, Uber and taxi drivers are also feeling the impact. North Vatan, who drives for Uber, says he remembers being able to fill up his tank for $65. Now he’s spending upwards of $120, leading him to consider other business ventures.

“No one’s hearing us,” he said. “There’s no support from the Canadian government for people in my position.”

In March, Uber Canada announced a fuel surcharge of $0.50 per ride to offset some of the increased cost drivers are bearing.

Taxi driver Ali Pourhashem is feeling a similar squeeze and is hoping the City of Toronto will raise taxi fare rates.

“It’s literally killing our business,” he said, adding that the rising cost of gas forcing him to cut on personal expenses.

McTeague says the rise in gas prices raises fears about how long this will last.

The rise in gas prices is one more way Canadians’ budgets are being squeezed, as inflation hit a 31-year-high of 6.7 per cent last month.

“We have a circumstance here of this heightened super-inflation … an energy bubble … beginning to hit consumers globally in a way that could very well trigger a global recession,” he said.

Muralidharan expects prices to stay strong for the next couple of months. High prices for longer than that will lead to “demand destruction,” he says, where people start decreasing their demand for fuel.

“If it stays there at high levels for a month, two months or three months, you will see people making tough choices and that will impact your demand and prices will have to respond,” he said.

Have your summer road trip plans been disrupted by rising gas prices? We want to hear from you for an upcoming story. Send an email to ask@cbc.ca