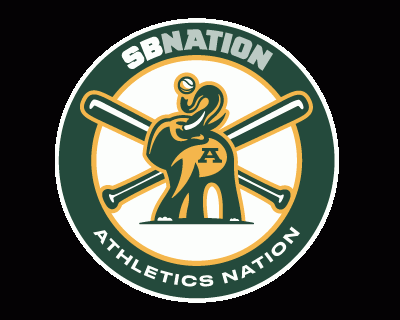 In stark contrast to the first two games of the series, today’s game was hitless from both sides into the fourth inning. The A’s scored just 1 run in the first 5 innings despite 6 walks from Brad Peacock, who threw a career-high 106 pitches. Daniel Gossett was decent through five innings — only giving up two runs — but in the end was on the hook for three more runs scored in the fifth.

Despite consecutive two-out walks in the first, the A’s were unable to score.

Cue the bottom of the inning, when thanks to some Reddick-esque work in right field, Matt Joyce robbed spiderman himself of a solo shot. Reddick, being the class-act he is, tipped his cap. Oh, baseball.

Some great photos of Joyce’s catch in the first by Bob Levey/Getty Images and Karen Warren/Houston Chronicle: pic.twitter.com/nLrP1EAzDB

No score after one.

In the top of the second, Phegley drew a walk but Olson, Brugman, and Rosales went down quietly. Gossett retired the side in the bottom half.

In the top of the third, Joyce struck out, Barreto walked (4th of the game if you’re counting), but Lowrie flied out and Davis struck out.

Again, in the top of the fourth, Gossett retired the side in order.

The first hit of the game came in the bottom of the fourth: a Ryon Healy single to right. Matt Olson followed that up with a single of his own that deflected off the glove of Marwin Gonzalez. Phegley then walked (fifth walk), Brugman struck out. With the bases loaded, Rosales grounded out, scoring Healy Joyce then walked (sixth walk), bases remain loaded. Barreto then flied (flew?) out. One run off of two bases loaded situations? Not ideal. In total, seven runners left on base through the first four innings.

Gossett finally slipped in the bottom of the inning. While he got George Springer to ground out, Reddick doubled (of course), Altuve hit a fly ball to center, allowing Reddick to advance to third. Carlos Correa promptly homered into the bullpen. 2-1 Astros.

Gossett allowed back-to-back singles to Evan Gattis and Gonzalez to start the bottom half, then walked Alex Bregman. He struck out Jake Marisnick, then got a slick assist from Franklin Barreto, who turned two with Jed Lowrie.

Chris Denski took over for Brad Peacock to start the sixth innings. Olson grounded out, Phegley popped out, and then Brugman singled. Brugman went on to steal his first base, but would have advanced anyway with the walk to Rosales that followed. Matt Joyce grounded out to end the inning.

Reddick singled to start the 6th (we get it, man), Altuve doubled him home. Carlos Correa was quick to take Gossett deep for the second time. 5-1 Astros.

Melvin brought in Liam Hendricks to replace Gossett. He retired the next three batters.

Top of the seventh, Barreto struck out, Lowrie singled, Davis struck out, and Healy flied out.

Michael Brady came in for the top of the 8th and gave up back-to-back singles to Bregman and Marisbick, leaving him with runners on second and third with George Springer at the plate and nobody out. He walked Springer, which was almost the best possible outcome. Reddick flied out to deep center, advancing all runners with one out. 6-1 Astros. Altuve then lined one straight to Lowrie, and then Correa was deservedly walked intentionally. Carlos Beltran flied out Brugman.

Chris Devenski struck out Olson, Phegly, and Brugman in the top of the 8th.

Evan Gattis lead off the bottom of the eighth with a deep double to left. Brady quickly retired the next three batters.

On to the ninth!

Rosales struck out, Joyce blooped a double to left, Barreto struck out, and Lowrie flied out.

We’ll see you back here tomorrow at 7:05pm when the Braves come to town.