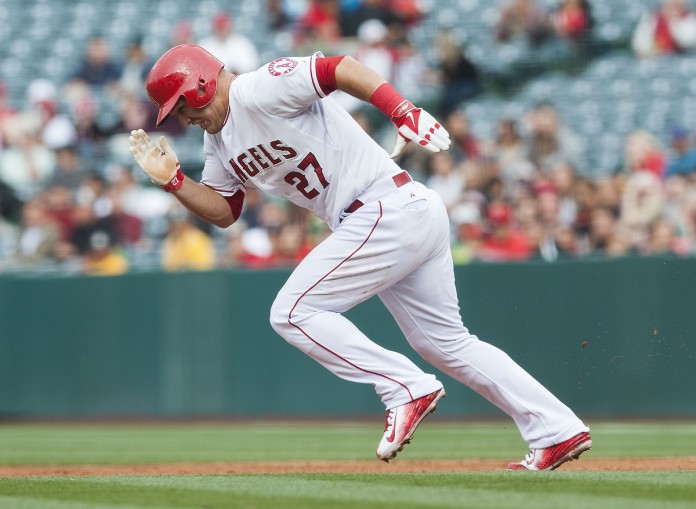 When thinking about the A’s and success this season, most people would point to the A’s ability to hit home runs or for power in general. Or the slow blossoming of the A’s young and growing pitching staff. Or the relative successes of homegrown rookies like Matt Chapman and Jaycob Brugman and others. Or the risky, high-upside trades made by the front office in recent months. Or, people will look at “The A’s” and “success” in the same sentence and laugh in your face. Either way, “savvy baserunning” and “superb defense” weren’t the first keys to success that popped into people’s minds when thinking about the A’s. But that is exactly how the team won tonight.

Rajai Davis didn’t start his reunion with his former team on the right foot to start the year, but has improved significantly as the spring turned to summer. He continued his hot streak with a leadoff single to center field on the first pitch he saw from Angels’ starter Tyler Skaggs. With relative ease, Davis stole both second and third base while Marcus Semien struck out and Jed Lowrie worked a nine pitch walk, placing A’s on the corners with just one out. With Skaggs making his first start since April due to an oblique injury, it was clear that his control wasn’t entirely with him in the early going, and with Khris Davis at the plate, Skaggs uncorked a curveball that tied up Angels’ catcher Martin Maldonado and shot back to the backstop, allowing Rajai to just barely sneak across home plate ahead of the throw. In a season where Rajai has been generally quiet on the basepaths, this was the epitome of a Rajai Run.

In the fourth, the A’s quickly began the inning with two outs, one out being a ludicrous out call on a play that saw the Angels’ first baseman leave the bag in order to receive a throw, but despite the umpires reviewing the play on instant replay, the out call was maintained. Umpire incompetence aside, the A’s would not be denied in the inning, as Chad Pinder made up for the botched call with a booming ground rule double to left center field, Matt Chapman walked, and Mark Canha tapped an infield single to load the bases with two outs. Dustin Garneau, a recent waiver claim from Colorado and newest Oakland Athletic, then had the biggest hit of the game. The backup catcher was forced to foul off some tough two strike pitches before he stroked a hanging curveball into right field for a 2-RBI base hit to give the A’s a 3-0 lead.

In the sixth inning, Matt Chapman worked his second walk of the game in a productive six pitch at bat. He advanced to second base on Mark Canha’s second infield single of the ballgame, planting the seeds of another A’s rally. Fourth inning hero Dustin Garneau struck out for the second time of the ballgame, but the A’s got a lucky break with Rajai Davis batting on a throwing miscue from Angels’ third baseman Yunel Escobar that allowed Matt Chapman to score easily and Mark Canha to advance to third base with Rajai making it to first. With Marcus Semien at the plate, Rajai used his wheels and took off for second once more. As Martin Maldonado fired the baseball down towards second base, Mark Canha didn’t hesitate and sprinted for home plate, the ball was quickly fired back to home, but the throw was offline and too late, and Canha scored to further expand the A’s lead to 5-0.

Those five runs, manufactured in a manner that has been entirely foreign to the A’s all season long, were more than enough for A’s starter Paul Blackburn. Once again, Paul Blackburn succeeded despite his terrible strikeout peripherals, further expanding his testament as a pitcher who excels at inducing weak, harmless contact. He was helped out greatly by the defense behind him, as opposed to being stabbed in the back and betrayed by his own teammates, but Blackburn was still masterful in inducing weak contact and never allowing the Angels to get any good swings off. His final line on the night was 6.2 innings pitched, with one hundred twelve pitches thrown, no runs, no walks, and just one single strikeout. Once again, Blackburn proved that overpowering stuff is not the only path to success when becoming a big league pitcher.

On defense, the A’s looked like bona fide professionals on the field, making highlight reel play after highlight reel play to keep Blackburn on top and the A’s comfortably ahead of their grimy “not Los Angeles” rivals. The first inning saw Matt Chapman showing off his fabled arm from third base and Chad Pinder making a sliding catch in right field. Ryon Healy made a spectacular scoop from a poor throw from Marcus Semien to end the first inning and started a slick double play in the second inning to continue his hot streak of getting extra outs. Throughout the rest of the game, the A’s played solid, fundamental baseball on defense and never conceded any extra outs.

The A’s bullpen was solid. For 2.1 innings, the Angels didn’t manage a single baserunner, and went down quietly. The A’s won 5-0.

This team can win in more ways than you think. They’ll look to take the series tomorrow at 12:37.