Frustration builds as Ottawa River expected to rise this weekend 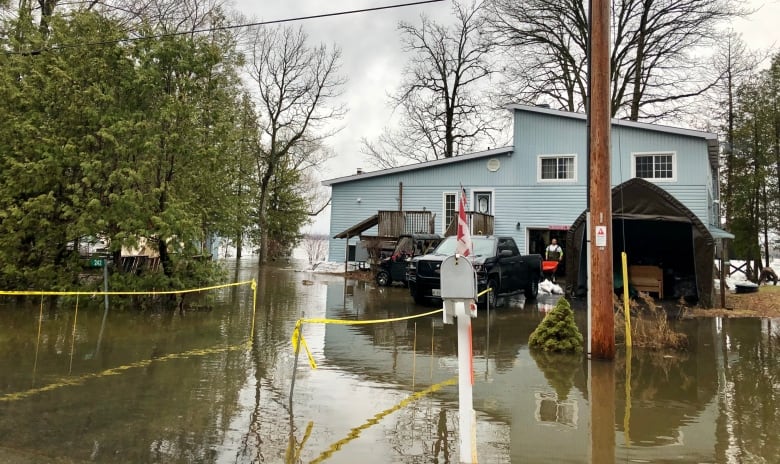 Frustrations are mounting in the Ottawa area as fatigued residents dig in for another day of warding off rising river levels.

A heavy rainfall warning for the Ottawa-Gatineau area ended late last night, but as of Saturday morning officials are warning many homes along the Ottawa River are still at risk.

Water levels in the west Ottawa community of Constance Bay have risen about 0.25 metres over the last 48 hours and are now near the levels reached during devastating flooding in May 2017, according to the Rideau Valley Conservation Authority (RVCA).

Levels are expected to rise an additional 0.4 to 0.6 metres above those reached in 2017, and projected to peak on Tuesday.

Prime Minister Justin Trudeau was at the Constance and Buckham’s Bay Community Centre earlier Saturday to be briefed by emergency management officials and help with sandbagging efforts.

At a news conference Saturday afternoon, City of Ottawa and Canadian Armed Forces officials said more than 4,000 volunteers had already signed up to help, including 1,800 on Saturday alone.

City manager Steve Kanellakos acknowledged there had been “some challenges” with the volunteer registration process due to the large number of people coming forward.

With no immediate end to the crisis in sight, Kanellakos said the city would work hard to address those challenges.

“We need people to sustain our efforts for multiple weeks,” he said. “It just doesn’t end when the water peaks.”

Late Saturday, the federal government announced that one of the city’s major bridges into Gatineau, Que., the Chaudière Bridge, is closing at 6 a.m. Sunday due to dangerously high Ottawa River levels.

More than 550 troops were on the ground in the city Saturday, with roughly half performing flood preparation work in the city’s Constance Bay neighbourhood.

“I’ve been on the ground for eight hours, and what I’ve seen is a sense of community that would make any Canadian proud,” said Col. Jason Adair.

Ottawa Public Health director Andrew Hendriks advised people who might come into contact with floodwater to take precautions, since the water could be laden with harmful bacteria, viruses and chemicals.

Those precautions, he said, include wearing protective clothing like rubber boots, hip waders and waterproof gloves.

Drone footage over Chaudière Falls along the Ottawa River today. This is only the second time in our 100+ year history that we’ve opened up all the spans of the Ring Dam. <a href=”https://twitter.com/hashtag/ottflood?src=hash&amp;ref_src=twsrc%5Etfw”>#ottflood</a> <a href=”https://t.co/CWZiqK8nOL”>pic.twitter.com/CWZiqK8nOL</a>

Despite the more promising forecast, the river is still expected to swell over the weekend, according to Michael Sarich, senior water resources engineer with the Ottawa River Regulation Secretariat, which controls reservoir levels along the length of the river basin.

“There’s more water coming down within the next few days that is going to be taking us a lot higher than 2017,” he said Saturday morning.

“Unfortunately, we did receive a good bulk of that precipitation that was forecast, particularly in the northwestern sectors. I guess the portrait that I’m trying to portray is just that the upstream waters that we’re expecting are there and that means that they’re coming.”

Sarich said their predictions suggest some affected areas could see 40 more centimetres than in 2017.

Crews will be watching to see if the improved forecast will be a factor, but Sarich said there’s already a worrying amount of water upstream moving down. 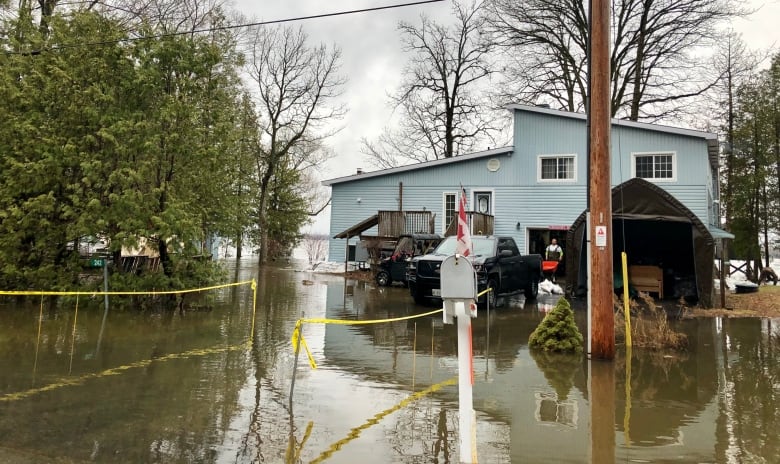 The community of Fitzroy Harbour is facing rising flood waters and a possibility of even more as the melt continues to move down river. (Britta Gerwin)

Sarich said water levels in Pontiac, Que., will peak first, then the upper and lower areas of the Ottawa River on Tuesday and Wednesday.

The city of Ottawa remains under a state of emergency as floodwaters are predicted to rise over the weekend. The CBC’s Olivia Stefanovich is on the scene in Constance Bay, in the western part of the city. 1:42

Ottawa is still under a state of emergency, prompting Mayor Jim Watson to call in the military earlier this week to help with sandbagging efforts.

At present, 500 houses are flooded or likely to be in all of Ottawa, according to city spokesperson Ian Miller. In 2017, about 80 people had to leave their homes and nearly 500 houses were affected.

Constance Bay, Britannia and Cumberland are particularly at risk.

With the worst still to come, Cumberland Ward Coun. Stephen Blais said early Saturday it was frustrating that many communities hadn’t seen any troops yet. 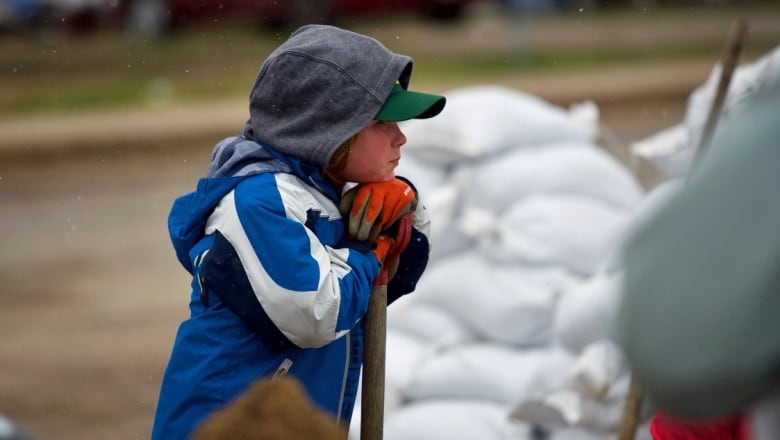 “We were told all day yesterday we’d get [the] army and we got nothing…. They haven’t shown up yet,” he said. “I’m beyond frustrated. I’m trying to be polite right now.”

Troops arrived in Cumberland later Saturday, and are expected to arrive in nearby Clarence-Rockland on Sunday.

Patrick Garbutt, who lives in Fitzroy Harbour, said the lack of help is taking a toll.

“We’re really in desperate need,” he said. “Morale is depleting…. The streets are no longer there.”

The City of Ottawa is asking people in West Carleton to prepared to leave their homes as water levels on the Ottawa River continue to rise.

Homeowners and volunteers will be battling miserable conditions on Saturday — likely adding to the irritation.

Environment Canada is calling for periods of rain mixed with snow on Saturday.

On the Quebec side, Pontiac Mayor Joanne Labadie said they’re about two-thirds through evacuating affected homes in the municipality.

With no hotels available, people are being lodged at the Tim Horton’s camp in Quyon, Que., she said.

“It means that our evacuees will be able to stay in the community and have a place that’s far more comfortable,” she said.

The flooding has been blamed for one death in the Quebec community, about 50 kilometres west of Ottawa. A woman in her 70s was killed last weekend when she drove into a large hole created after floodwaters washed out a road.​​​​​​