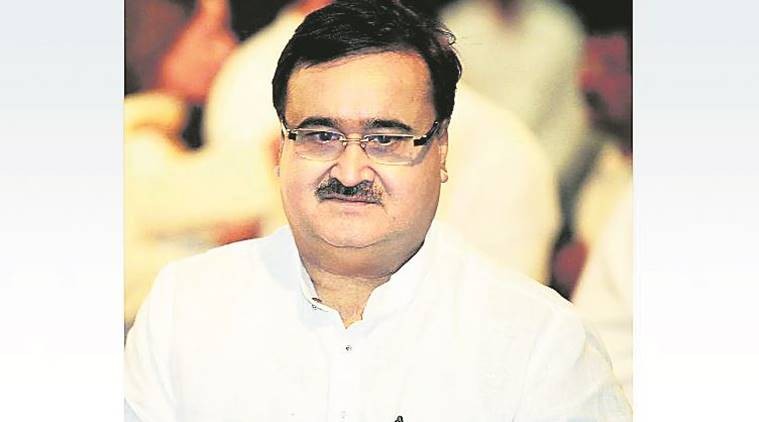 Maharashtra Housing Minister Prakash Mehta landed in fresh trouble Friday as the Opposition alleged violations in two more housing projects related to redevelopment of transit camps and slum colonies in Ghatkopar. The Opposition alleged the housing minister had favoured his son and relatives in the redevelopment of a SRA project. In another project at Ghatkopar, it alleged Mehta allowed the amalgamation of slum colonies and transit camps in violation of rules.

The housing minister denied any wrongdoing. “If the chief minister takes a decision, I’m willing to step down from the department till the probe is completed,” Mehta said. The development, coming a day after Chief Minister Devendra Fadnavis gave a clean chit to Mehta in the redevelopment project at MP Mills Compound in Tardeo, came as an embarrassment to the Fadnavis government.

Showing documentary proof, Leader of the Opposition in the State Legislative Assembly Radhakrishna Vikhe-Patil said at Kirol in Ghatkopar, a property owned by Messrs Sai Nidhi Pvt Ltd was registered in revenue records. In November 2008, Mehta was an additional director in the company and his name features in the Ministry of Corporate Affairs’ list of company directors, he alleged.

Vikhe-Patil alleged on this property, two SRA buildings – Laxmibhuvan and Gopalbhuvan – were built in which one of the beneficiaries was Harsh Mehta, the minister’s son. Harsh Mehta was enrolled as a tenant, he alleged, adding that several relatives of the minister too were enrolled as tenants. Vikhe-Patil said the original eligible tenants were still waiting for their rightful share in the SRA project. The Opposition leader alleged the minister misused his powers to provide financial benefit to his family members.

Vikhe-Patil showed documents to show Mehta no longer holds the post of director in the company and that at present, it was held by his “close friend” Mukesh Doshi. He cited CCTV recordings – showing the two moving together in Vidhan Bhawan – “to establish the close equation between Mehta and Doshi”. In another project at Ghatkopar, the Opposition pointed out alleged irregularities in transit camps and slum colonies, saying that in this case too, the housing minister did not seek the consent of the chief minister, which was mandatory.

Vikhe-Patil said, “Officials in SRA, housing ministry had on October 2016 noted that under Section 33 (10), redevelopment of the project was not in accordance with norms. As under Section 33 (14), there is no provision to allow the clubbing of slum colonies with transit camp.” “It was clearly stated that the Mhada transit camp redevlopment adjoining slum colonies cannot be amalgamated,” he said. The Opposition leader said Additional Chief Secretary Sanjay Kumar also mentioned in the file that it should be moved to the CM. But the housing minister bracketed the word CM, he said.

Vikhe-Patil said all the departments concerned gave negative remarks on the project, yet on January 3, 2017 a fresh note was prepared by the housing ministry. On January 6, 2017, the revised note was circulated and signature from all the departments were hurriedly taken and processed, he alleged. “The document shows the orders issued by the housing minister says the redevelopment of transit camp under Section 33 (14) should be changed in Section 33 (10), which is illegal,” the Congress leader said.

The Opposition said when the SRA chief is the CM, how could the minister bypass him. There was pandemonium in the House with senior Opposition leaders attacking Fadnavis for protecting Mehta. NCP’s Ajit Pawar said, “Why two rules when you removed a bureaucrat on corruption charges, why protect Mehta?”

Vikhe-Patil said, “If the CM’s hand are tied, it shows someone else is running the housing ministry from Delhi.”