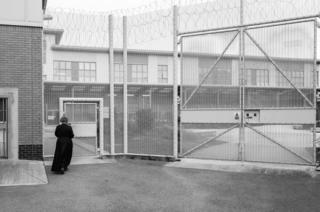 To mark the 25th anniversary of the first ordinations of women to the priesthood in the Church of England, photographer Jim Grover was commissioned by the bishop of Southwark to record the experiences of 12 women in the diocese.

The final work, entitled Here Am I, is on show in London and here we present four of the stories.

The Reverend Susie Simpson was born in 1958 and following a degree in music at Oxford, she spent four years as a teacher before taking a break to bring up her family.

Ordained in 2000, she initially followed a traditional ministry path, culminating in being team vicar for two churches in High Wycombe, Buckinghamshire.

In 2008, she changed course and entered prison chaplaincy, one of some 100 chaplains serving the prison community in the UK, about 40 of whom are women.

As a prison chaplain, she is a civil servant and, this year, was commended in the annual Butler Trust awards, which recognise outstanding contributions in UK prisons.

“The core of my faith is about God’s generosity,” Ms Simpson says.

“The note-cards on my desk are the names of all the prisoners I’ve got to know here.

“When they leave, I write their name on the card and I say to them, ‘I’ll never forget you. These cards will come with me to my grave, in my coffin. And I’ll always pray for you.’

“I recently counted up that around 50 musicians have come through my prison band.

“Only a handful are back in.

“That’s pretty good going. That’s success. That was lovely to find out.”

Born in St Elizabeth, Jamaica, in 1945, the Reverend Dorothy Pennicooke came to Tooting, south London, in 1965, to join her husband, whom she had married in Jamaica the year before.

Along with bringing up her three sons, she worked in a variety of finance roles over 40 years.

In parallel, she was a self-supporting part-time minister, leading to her ordination in 2001.

Ms Penniecooke has attended the Ascension church, in south Clapham, for the past 50 years.

Now 73, she continues to minister to her local community, in churches but also in Minnie Kidd House, a local NHS care home, where she is honorary chaplain.

“A few years later, a lady came there and one evening I went to her room and asked, ‘Can I come in?'”

She said that she did not believe in God.

But Ms Pennicooke refused to take “No,” for an answer, visiting her each Sunday until, after a few weeks, the woman told her: “God will never forgive me because I wasn’t good.”

Ms Pennicooke continued to visit her each week for more than a year.

Then, one Sunday evening, the woman thanked her for her prayers and said she was finally at peace with herself.

The following week, she died.

“That’s where I get my greatest fulfilment,” Ms Pennicooke says, “being alongside people when they are struggling, helping them know that they too are a child of God.”

Born in Monroe, Louisiana, the Reverend Mae Christie grew up in a very religious family in the Episcopal Church.

An early career in the legal profession made way for ministry and, at the age of 28, she came to the UK, intending to study here for a year before returning to the US to complete her theological training.

But Ms Christie never left, drawn to the Church of England by its parish system.

Ordained in 2015, in 2017 she was given her first parish, in Tooting, where she is priest-in-charge of All Saints Church, the first woman to be responsible for this parish.

“For me, the point of the saints is that they stood for something.

“They did whatever they could in their own lives to show the love of God.

“I think they are very important.

“They are not superhuman or superheroes.

“They are people like us who stood for something.”

Following two youth stabbings in the area, Ms Christie asked her congregation to write messages in a heart.

“We ended up with these hearts which say, ‘God loves,’ at the top and we handed them out in our service,” she says.

“Everybody wrote something, from the kids all the way up to the 90-year-olds.

“I wanted us to make a physical sign of the love of God in our neighbourhood – and stand for something ourselves.”

The Reverend Ann Gurney has given a remarkable 72 years of her life to the Church and experienced, first hand, the changing roles of women: as a deaconess, an ordained deacon, and, finally, an ordained priest.

At the end of World War Two, aged 18, Ms Gurney went to Gilmore House, in Clapham, a Church of England training college for women in ministry.

“I remember clambering up the steps at the front door despite the unnerving presence of the senior sacristan, one of the existing students, handing out green veils for chapel to new arrivals,” Ms Gurney says.

“We were about a dozen in number.

“The head deaconess exuded charm in her blue, ankle-length dress and white muslin bonnet tied with a large bow under the chin.

“Deaconesses then were regarded as rather antiquated.”

Ms Gurney’s first parish role followed, at St Paul’s Church Lorrimore Square, and it was there that she felt that this was to be a life of ministry and so she returned to Gilmore House to train as a deaconess.

In 1959, she returned to Gilmore House for a second time but this time as its principal, the head deaconess, and held this post for 11 years until the college’s closure in 1970, by when women’s training was beginning to be integrated with that of men, in mixed theological colleges.

In 1987, women were made deacons for the first time and so, just a few weeks before her retirement, Ms Gurney was admitted to the diaconate for, what seemed to her, the second time.

“I can remember very vividly being ordained a deacon at St Paul’s Cathedral… even though I thought I was one already,” she says.

“Prior to the service, I handed back my deaconess New Testament, saying, ‘Give me that again. I don’t want another one.'”

Ms Gurney’s retirement represented the start of a further 30 years of ministry and in 1994 she was one of the 78 women first ordained into the priesthood in the Diocese of Southwark.

The Bishop of Southwark, the Right Reverend Christopher Chessun, marked the occasion by presenting her with the Lancelot Andrewes Medal in recognition of her “Godly services and zeal for the gospel in this, our diocese”.

Here Am I by Jim Grover can be seen at the Oxo Tower Gallery in central London from 22 May to 2 June 2019. 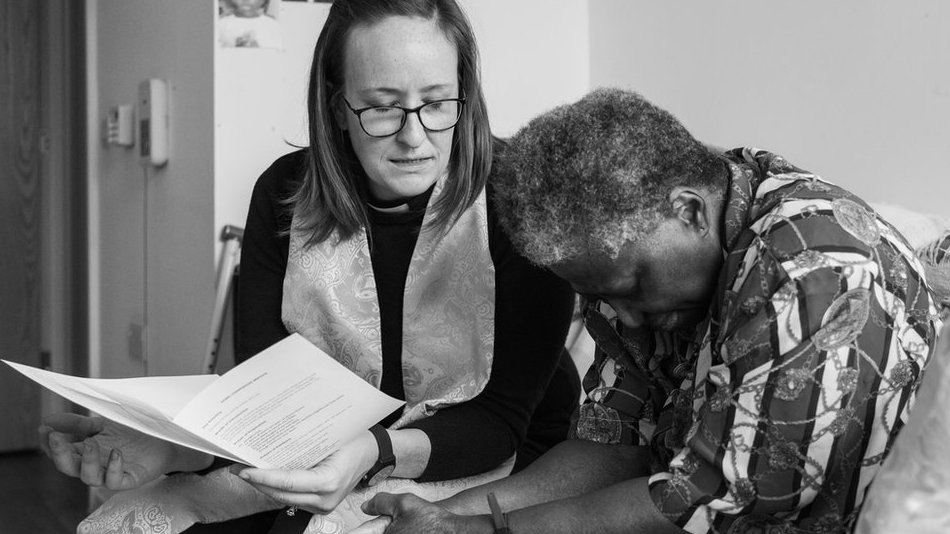