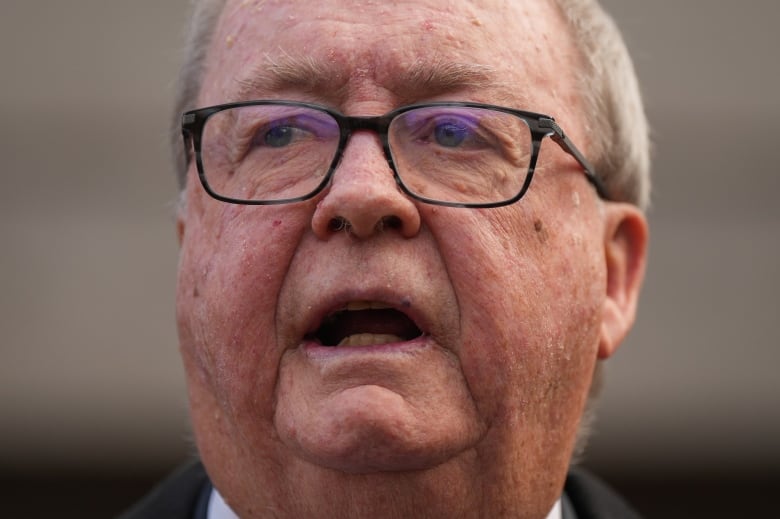 A provincial court judge has found Doug McCallum, the former mayor of Surrey, B.C., not guilty of public mischief.

The 78-year-old was accused of lying to police in September 2021 by falsely accusing a political opponent of deliberately running over his foot after she confronted him in a supermarket parking lot.

In his decision, Judge Reginald Harris said he believed the medical and physical evidence proved that Debi Johnstone ran over McCallum’s foot.

He also found that errors in McCallum’s statement were likely the result of “distorted memory” as a result of shock.

In a verdict that took a little more than an hour to read, Harris said he concluded McCallum lacked motive to get revenge on an irritating opponent by concocting a story meant to see her be investigated for an offence she did not commit.

“In my view, his statements reflect reasonable perceptions and not evidence capable of supporting an inference of misconduct,” Harris said.

“For the above reasons, I find Mr. McCallum not guilty.”

Diverging stories and a difficult shrub

Outside the court after the verdict, McCallum said he was “very pleased” with the outcome. He read a brief statement thanking his family and said, “to the people of Surrey, I love you.”

He refused to take any questions.

McCallum was charged with public mischief under a section of the Criminal Code that makes it an offence to lie to police in order to see someone accused of a crime they did not commit.

The charge arose from a chance encounter on Sept. 4, when Johnstone spotted the former mayor walking toward the grocery store as she manoeuvred her open-top convertible Mustang through the parking lot.

Johnstone is a member of a group that opposed McCallum’s plans to replace Surrey’s RCMP detachment with a municipal police force.

On the stand, she claimed she shouted, “resign, McCallum,” after seeing the former mayor, and then launched into a profane tirade when he walked over to her car.

It’s at that point McCallum’s and Johnstone’s stories diverged.

She claimed she drove away without hitting him. He claimed that she ran over his left foot.

CCTV footage of the incident was inconclusive because McCallum’s foot and Johnstone’s wheel were both obscured by a small shrub.

Special prosecutor Richard Fowler said the version of events McCallum gave in 911 calls and a police statement was clearly at odds with the video.

McCallum repeatedly claimed Johnstone “pinned” him against his car, and also suggested she “tore” away from him — neither of which occurred.

His lawyers chalked the differences up to shock and the frailty of human memory, but Fowler said McCallum was “not an individual without some level of sophistication” and that his words “were not simply reckless hyperbole.”

In his decision, Harris went through the allegations, the testimony of the various witnesses, the video of the incident and the medical records that were entered into evidence during the trial.

He spent a considerable amount of time on the concept of McCallum’s right to be presumed innocent.

“The presumption of innocence is crucial,” Harris said.

“This is essential in a society committed to fairness and social justice.”

In examining a possible motive for McCallum to falsely accuse Johnstone, the judge rejected the notion that the former mayor was motivated by the need for revenge against a woman who had repeatedly assailed him in public.

Crucially, the judge said he found Johnstone had in fact run over McCallum’s foot, supported in part by the video that he said showed her “stealthily” making her way through the parking lot before calling out to the former mayor.

He said the video showed McCallum was not pinned to his car and that Johnstone did not “peel rubber” as she drove away. Nevertheless, he said the shock of the events at the time would have been enough to cause a “distortion of memory.”

“In my view, there is ample, objectively verifiable evidence confirming Mr. McCallum’s assertion regarding his foot,” Harris said.

The judge also pointed out that it was McCallum himself who suggested police check out the CCTV footage from Save-On-Foods.

“In my view, it defies logic that Mr. McCallum would deliberately mislead the police and then immediately suggest they get evidence … that would show him to be a categorical liar,” Harris said.

Former Surrey councillor Laurie Guerra, a McCallum ally who testified about what the defence called the “toxic fanaticism” surrounding the issue of municipal policing, was also in court for the verdict.

She became emotional immediately after Harris pronounced the former mayor not guilty, and later said that the whole ordeal had been very stressful for McCallum’s family.

The not-guilty verdict leaves open the question of whether or not the City of Surrey will be forced to foot McCallum’s legal bills for the trial.

The cost of his defence is unknown at this point, but McCallum was represented by prominent lawyer Richard Peck, the same man who headed the defence team at Huawei chief financial officer Meng Wanzhou’s extradition proceedings.

McCallum was ousted during last month’s municipal elections by the current mayor, Brenda Locke, who announced on the opening day of her predecessor’s trial that she had ordered city staff to stop paying McCallum’s lawyers.

At the time, Locke told the CBC that she had ordered a review of the process that would normally indemnify a city employee who needs to defend themselves in court for actions occurring out of their job.

“It is a shield, that’s pretty clear,” she said at the time.

“But in this case, it was different … it’s not just somebody came and attacked him. He is the one that allegedly made a very bad decision.”

In a statement released shortly after McCallum’s acquittal, Locke said the city would “continue to explore its options in relation to Mr. McCallum’s legal issues, and I am expecting an update in the next few weeks.

“I will also be asking for a review of the Indemnification bylaw so it can be improved to ensure this won’t happen again.”