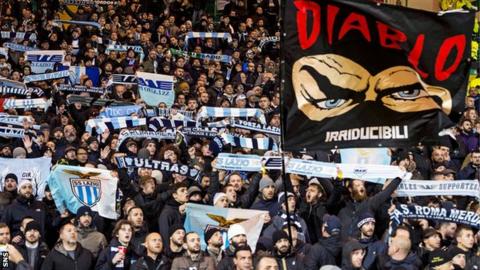 Football News Celtic and Lazio have both been charged by Uefa after supporters sang “illicit chants” in the Europa League meeting of the sides last week.

The chants were not racist, but related to the use of obscene language.

The Scottish Premiership club have also been sanctioned after fans displayed “illicit banners” during the 2-1 win.

One depicted former Italian leader Benito Mussolini hanging upside down and another displayed swearing in Italian.

The cases will be adjudicated upon by Uefa’s control, ethics and disciplinary body on 21 November.

It is the 19th time Celtic have been punished since 2007 and their third charge this season.

Last month, Celtic were fined £10,400 by Uefa for fans setting off flares in the Europa League win over Cluj.

Celtic paid an £11,000 fine for their fans using flares and throwing objects in the play-off second-leg win over AIK in Stockholm in August.

Neil Lennon’s side travel to Rome next week to face Lazio in their fourth group game, with an estimated 8,000 travelling fans subject to a strict alcohol curfew.

Both clubs are fearful of the bad blood continuing in Rome and fear violence.

The city’s main tourist attractions will be heavily policed, an alcohol curfew will be in place from 18:00 on Wednesday until 07:00 on Thursday, and fans will be told to be wary of wearing club colours.

The Lazio Ultras have a reputation for being one of the largest, and most violent, fans groups in European football.