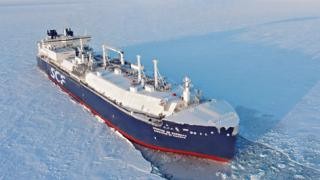 A commercial LNG tanker has sailed across the colder, northern route from Europe to Asia without the protection of an ice-breaker for the first time.

The specially-built ship completed the crossing in just six-and-a-half days setting a new record, according to tanker’s Russian owners.

The 300-metre-long Sovcomflot ship, the Christophe de Margerie, was carrying gas from Norway to South Korea.

Rising Arctic temperatures are boosting commercial shipping across this route.

The Christophe de Margerie is the world’s first and, at present, only ice-breaking LNG carrier.

The ship, which features a lightweight steel reinforced hull, is the largest commercial ship to receive Arc7 certification, which means it is capable of travelling through ice up to 2.1m thick.

On this trip it was able to keep up an average speed of 14 knots despite sailing through ice that was over one-metre-thick in places.

On its maiden voyage earlier this year, the Christophe de Margerie docked in the Russian port of Sabetta. Russian President Vladimir Putin congratulated the crew and energy company officials gathered on the ship’s bridge, saying: “This is a big event in the opening up of the Arctic.”

The Russian owners, Sovcomflot, will use this ice-breaking tanker to export gas from the Yamal peninsula to Asian markets later this year.

It will be the first of a planned fleet of 15 that will transport gas from these ice bound fields all year round.

“Previously there was only a window of navigation from our summer to autumn, but this ship will be able to sail westwards from Sabetta which is the Yamal energy port, all year round and eastwards from July to December,” said Sovcomflot spokesman Bill Spears.

“Before the northern sea route was only open for four months and you had to have ice-breakers – so it’s a significant development.”

In 2016, the northern sea route saw 19 full transits from the Atlantic to the Pacific.

High insurance and large fees for Russian ice-breakers are still discouraging some ship owners from the riskier northern route. But the economic benefits are attractive – the Christophe de Margerie took just 19 days for the entire voyage, around 30% faster than going by Suez.

There has been an overall decline in Arctic sea ice over the past 30 years, linked by scientists to rising global temperatures. This year, according to the US National Snow and Ice Data Centre (NSIDC), the annual maximum extent of Arctic sea ice hit a record low for the third year in a row.

This diminution of northern ice is something that the Russian ship owners believe will continue well into the future.

“If there was a material change in the ice thickness it would change the period of the year that the ship could move through the Northern Sea Route,” said Bill Spears from Sovcomflot.

“There is an assumption that the ice is not going to thicken dramatically for the economic life of these vessels, which could be over 30 years.”

Environmental campaigners, though, are worried that increased traffic in this inhospitable region could have potentially significant effects.

“We’re concerned that this is a commercial opportunity that has only opened up because of global warming, and we’re especially concerned that having taken advantage of the thinning of the ice, shipping operations are now expanding in that part of the world,” said John Maggs from Seas at Risk.

“It is not like sailing in open water, even if you have an ice classed ship, the risks are dramatically increased.”

As well as the risk of accident or spillage, there are worries that some of the ships that will sail along this route will be powering their engines with heavier, dirtier marine fuels. The black carbon that they produce could be very damaging to snow and ice in the region, increasing the melting.

“You are taking industrial-sized installations and moving them through a pristine Arctic environment, so it’s going to have an impact – and what are we getting in return, slightly shorter journey times? A 30% gain is not much of gain to me.”