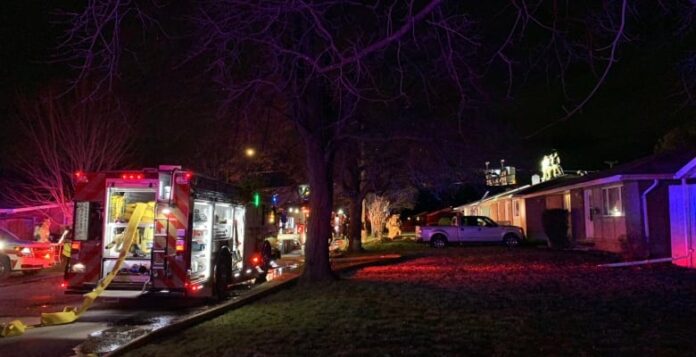 As the one-year anniversary of the Al Hamoud family’s move from Syria to Ottawa approached, Marine Armstrong was writing a letter to their sponsorship group to say their first year was ending “beautifully.”

Armstrong, a member of the group, wrote that the father, Hamid, was settling into a new job. The mother, Soha, was pregnant with their fourth child, while the other three sons were learning English and settling into school.

The Al Hamouds were chased from their beds in the early hours Thursday morning by a major fire that destroyed their Hanlon Avenue home and many of their possessions.

With translation help from his niece Aya Abara, Hamid Al Hamoud told CBC what happened the night of the fire.

Soha woke up just after midnight Thursday to what she believed was the sound of dripping water in the children’s bedroom.

She went to investigate, and instead found smoke and a small fire near the children’s beds. She woke Hamid, and the two rushed the family outside.

Their youngest son was asleep when Hamid carried him from his room, but the child woke in his father’s arms as he was whisked out the door.

Nobody was injured, but the family watched as flames licked the roof. Hamid knocked on the neighbour’s door to ask for help calling 911 because, having spent less than a year in the country, he didn’t know how.

The neighbour, Zac Van Daele, immediately dialled the emergency number. Firefighters were on the scene in minutes.

“The whole neighbourhood is kind of shook that this happened,”  Van Daele told CBC the next day. “It’s terrible it happened to this family.”

Hamid Al Hamoud said the family will have a three-day hotel stay covered by the Red Cross. After that, he isn’t sure what they’ll do.

She said the sponsorship group is looking to temporarily rent a place nearby for the Al Hamouds to stay, hoping to minimize the disruption on the kids.

The group will also replace the family’s furniture and set up utilities at their new home.

Armstrong said it’s easy to imagine how the fire might be “re-traumatizing” to the kids, after their fleeting glimpse of stability since moving to Canada.

“They’ve lived in tents with numerous family members — crowded tents — most of their life,” she said. “It must be really destabilizing for kids who are just getting their footing.”

For Soha Al Hamoud, the fire is still fresh in her mind.

“What if I didn’t smell the smell of the fire?” she asked. “I’m still thinking about it, and that image in my head of the fire.”