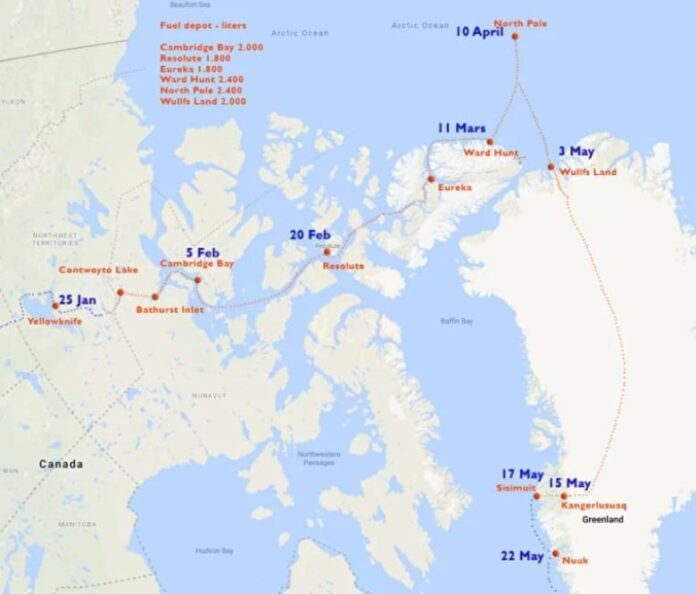 Transport Canada says it has laid thousands of dollars worth of fines against those involved with a charter flight carrying two Russian civilians that was grounded in Yellowknife Tuesday.

News of the flight broke Wednesday when the N.W.T.’s infrastructure minister, Diane Archie, told the Legislative Assembly the passengers had been en route to Resolute, Nunavut, as part of an Arctic expedition in a “large all-terrain utility vehicle.”

On Friday, Transport Canada confirmed it has laid $3,000 fines against the Russian passenger who had chartered the aircraft and each of the two pilots of the flight. The aircraft operator, Dunard Engineering Ltd., has been fined $15,000.

The operator is based out of Geneva, Switzerland.

Sau Sau Liu, a senior communications advisor with Transport Canada, said in an email that the federal agency investigated the flight. Though the aircraft is not Russian-owned or registered, Transport Canada found it broke new airspace restrictions that were announced Feb. 27 in response to Russia’s invasion of Ukraine.

Those restrictions closed Canada’s airspace to any Russian-owned, operated or chartered aircraft.

Liu said Transport Canada is allowing the aircraft in question to operate in Canadian airspace so it can leave Yellowknife, but it can’t have any passengers on board.

No information was provided about the Russian passengers, or where they are.

“The department will not hesitate to take further enforcement action should additional incidents of non-compliance with the regulations and restrictions be found,” Liu wrote.

In an update to the Legislative Assembly Thursday, Archie said the plane was being held until the federal government wrapped up its investigation.

“Until the Canadian Border Service met the plane here in Yellowknife and determined that the passengers were Russian nationals, there were no flags raised,” she said.

As first reported by Cabin Radio on Wednesday, the expedition to the Arctic is likely the TransGlobal Car Expedition, where a team is attempting to cross every continent by vehicle.

The team includes Vasily Shakhnovsky, a Russian former oil and gas executive once reported by Forbes to have wealth well in excess of $1 billion, and Vasily Elagin, a Russian mountaineer and explorer.

Recent posts to the expedition’s Facebook page showed the group expected to be in Canada this week.

On Thursday, the group also posted about its all-terrain vehicle, dubbed “Yemelya”, which will be driven across “the most impassable parts of the route on the way to the Arctic Ocean.”

According to a post on the team’s Facebook page, the group planned to travel east from Yellowknife, past Ekati Mine and toward Contwoyto Lake in Nunavut.

A route map posted to the group’s website shows they planned to travel up through Nunavut, to the North Pole, and then down through Greenland.

Archie told the Legislative Assembly she was “disappointed” with the lack of communication from the people planning to go on the expedition.

“I’m hopeful that they at least reached out to the [Yellowknives Dene] First Nation or the Tłı̨chǫ when accessing their traditional territory,” she said.