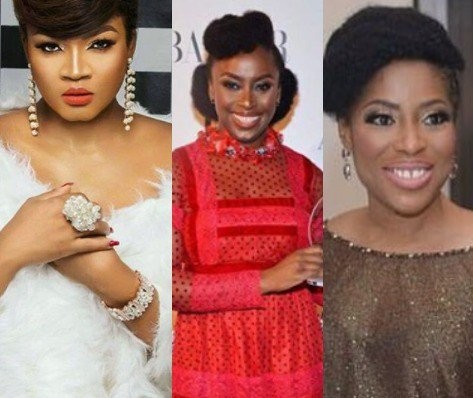 The Federal Government has congratulated Mo Abudu, Chimamanda Adichie and Omotola Jalade-Ekeinde, over the honours recently bestowed on them on the global stage, calling them great ambassadors of Nigeria.

In a statement issued in Abuja on Sunday, the Minister of Information and Culture, Alhaji Lai Mohammed, said the three honorees are iconic women in the Creative Industry who have brought great honour not only to themselves, their families and their industry, but also to the country.

He described as well deserved the listing of Mo Abudu, the Chief Executive Officer (CEO) of EbonyLife TV, and Nollywood star Omotola Jalade-Ekeinde among the top 50 women ”who are doing extraordinary things on the worldwide stage” by Variety magazine, a weekly American entertainment magazine.

Alhaji Mohammed also said the already well-adorned cap of Chimamanda Adichie has been further festooned after her novel, Americanah, was listed in the New York Times’ list of 15 remarkable books by women that are ”shaping the way we read and write fiction in the 21st century”.

He said the women are role models whose achievements will inspire a generation of young Nigerians to also do extraordinary things.

”Of more importance is the fact that these women’s achievements have transcended gender, nationality or race, placing them on the rarefied class of global, timeless achievers,” the Minister said.

He said the great honours bestowed on the women will further focus world attention on the nation’s burgeoning Creative Industry, thus
placing it on the right pedestal to take the world by storm.