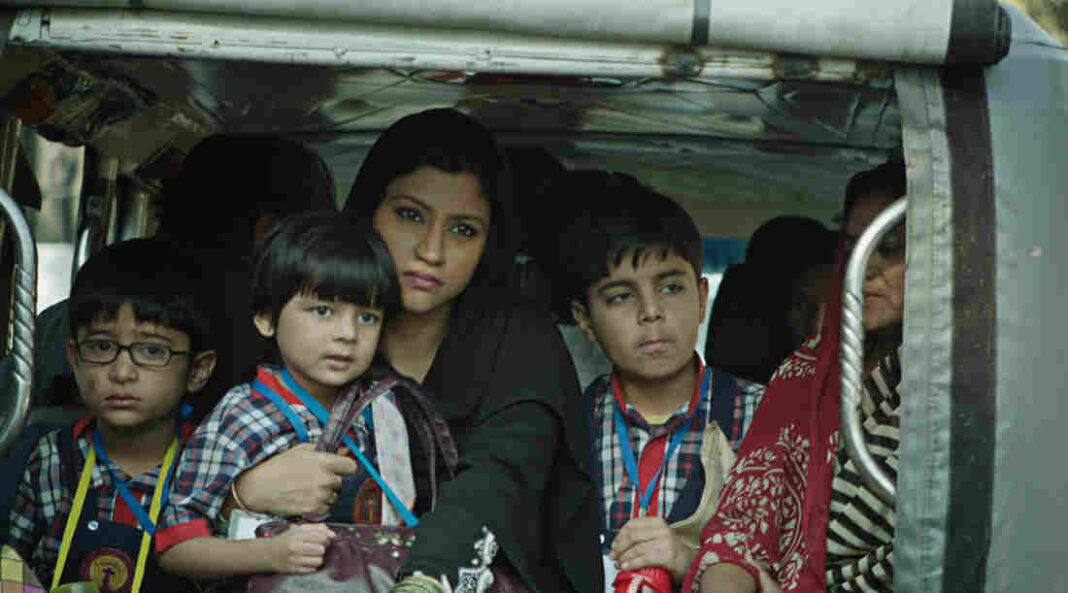 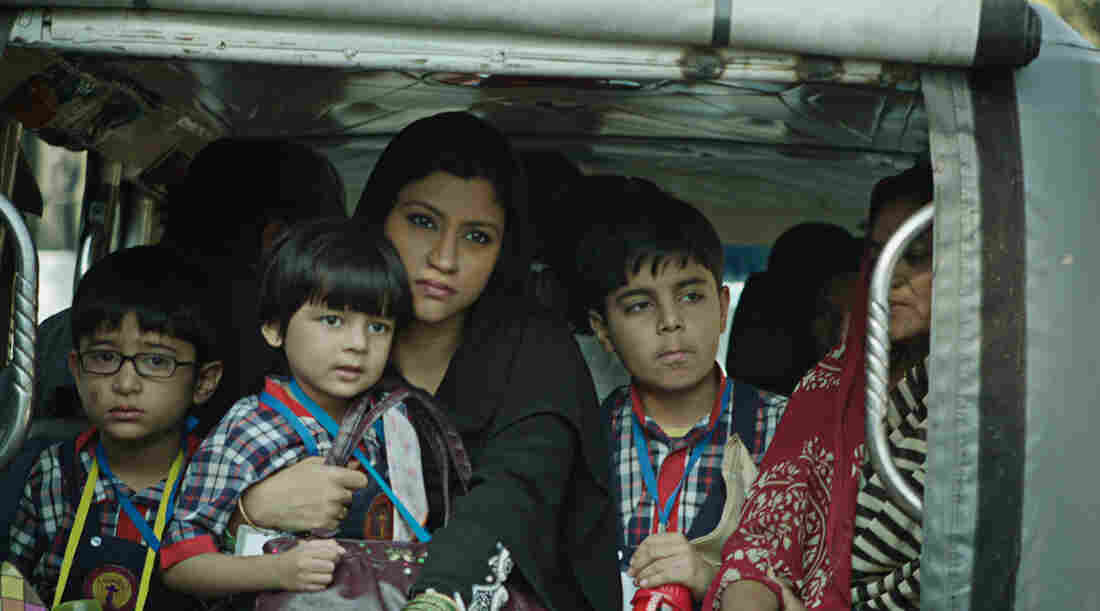 Actress Konkona Sen Sharma is one of four female leads in Director Alankrita Shrivastava’s film Lipstick Under My Burkha. Sen plays a housewife and mother who is secretly a super door-to-door saleswoman.

Typically, India’s Bollywood film industry depicts older women as maternal and virtuous. Younger ones often are eye candy, propping up male leads. But a recent crop of films is showing more complex female characters, training a spotlight exclusively on the lives of women — and, even more unusually, on their sexuality.

The lighthearted Lipstick Under My Burkha, two years in the making, is one new film taking female roles in a new direction. It follows the “secret lives” of four women living in the Old City of Bhopal. Director Alankrita Shrivastava says she wanted to explore how women in small, traditional urban centers are identifying with the new, aspirational India.

“They can see this new India, and it’s within reach — that mall is a bus ride away. They are on the verge of wanting much more than what their lives are supposed to be” as wives and mothers, she says. “I wanted to explore the fact that more is possible.” 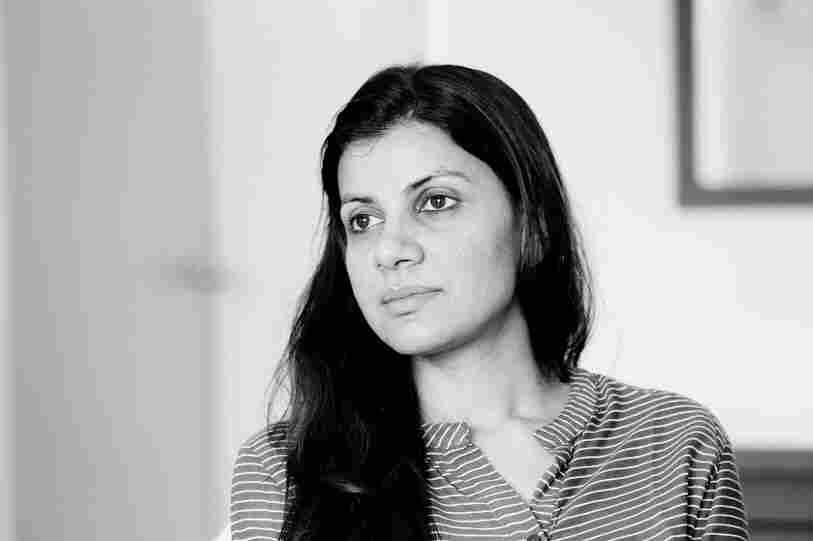 Director Alankrita Shrivastava has been struggling to bring her film, “Lipstick Under My Burka,” to Indian theaters. India’s Censor Board blocked its release, a move the director says means, “They want women to shut up, and not to share their experiences.” Komal Gandhi/Courtesy of Alankrita Shrivastava hide caption

Director Alankrita Shrivastava has been struggling to bring her film, “Lipstick Under My Burka,” to Indian theaters. India’s Censor Board blocked its release, a move the director says means, “They want women to shut up, and not to share their experiences.”

In the movie, Aahana Kumra, 32, portrays Leela, a feisty beautician with irrepressible lust. Her character, a Hindu, has a sizzling affair with a young Muslim photographer whom she cannot marry — because he’s poor with few prospects for the future. Leela’s overt sexual desires are splashed up on the screen with unusual raw humor, like when she videotapes herself having sex.

“Everybody is squirming in their places and asking, ‘Oh my God, what are we watching?’ And I think that’s interesting to watch. Because art should make you uncomfortable, or should make you think,” says Kumra.

Kumra says she understands the impulse to recoil, because she herself is socially conservative and had to “dig deep” to play a woman who was so open to sex.

Actress Ratna Pathak plays Usha, and says portraying a widow with a libido is a radical idea in Indian cinema.

“People get shocked by the idea of the post-60 generation having a sexual drive at all,” Pathak says. “Which is ridiculous.”

Still, her eyes pop as she imagines how her “own relatives would react watching” her onscreen.

They can’t watch for now, because the film has yet to reach Indian audiences.

Lipstick Under My Burkha premiered in February in Tokyo, and has been screened at film festivals in Stockholm, Miami, Athens and Cairo. India’s Central Board of Film Certification, commonly known as the censor board, refused to certify the film for release in India on the grounds it was “lady oriented,” with “sexual scenes, abusive words, audio pornography.” 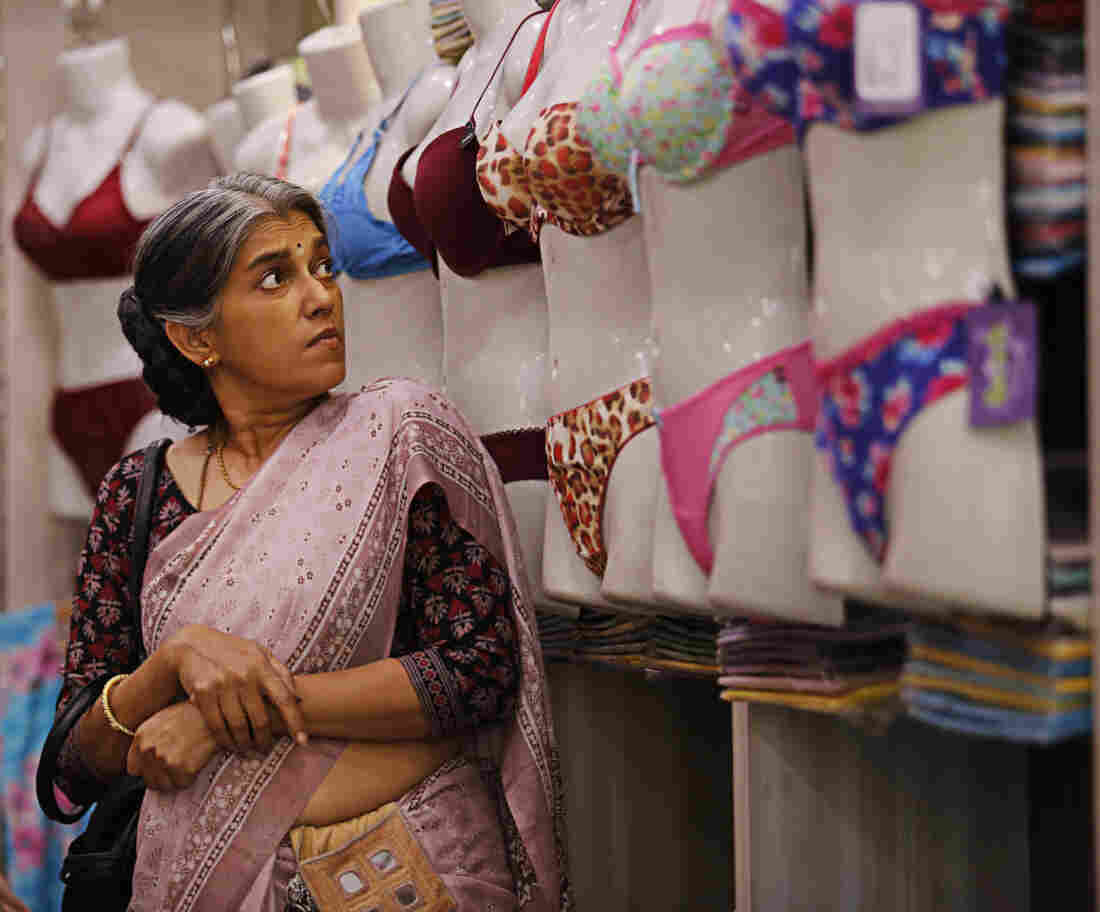 Actress Ratna Pathak stars as the older woman, Usha or Auntie, in Alankrita Shrivastava’s Lipstick Under My Burkha. She says “little by little” Bollywood is showing a bit more interest “in stories about women that are not black and white.” Jignesh C. Panchal hide caption

Actress Ratna Pathak stars as the older woman, Usha or Auntie, in Alankrita Shrivastava’s Lipstick Under My Burkha. She says “little by little” Bollywood is showing a bit more interest “in stories about women that are not black and white.”

“Patriarchy is alive and kicking,” says director Shrivastava, curled up on a couch in her office in Mumbai.

Shrivastava, 37, says the censor board’s refusal to release the film in India means it has “no idea about the fact that women and men have equal rights in this country. It makes me feel like they don’t want women to tell their stories, they want women to keep quiet and shut up.”

Shrivastava contested the censor board’s actions before an appellate tribunal, and in April, the tribunal reversed the decision and unblocked the film. But the censor board has yet to sign the documents certifying the movie.

The director says multi-dimensional roles that project women as complex characters are mostly absent from mainstream Bollywood, which she says persists in portraying women as objects.

One Bollywood staple, she says, is the so-called “item number,” featuring singing, dancing, scantily clad women. Shrivastava says “the camera randomly” pans “up and down a woman’s body” during item numbers, which has nothing to do with the narrative of the film itself. She calls “chikni chameli” or “beautiful girl,” with Bollywood leading lady Katrina Kaif a classic example. It’s lyrics are risqué as Kaif’s moves: “My eyes are like scorpions, they give a poisonous wink … This damned slender waist kills thousands with a jerk.” 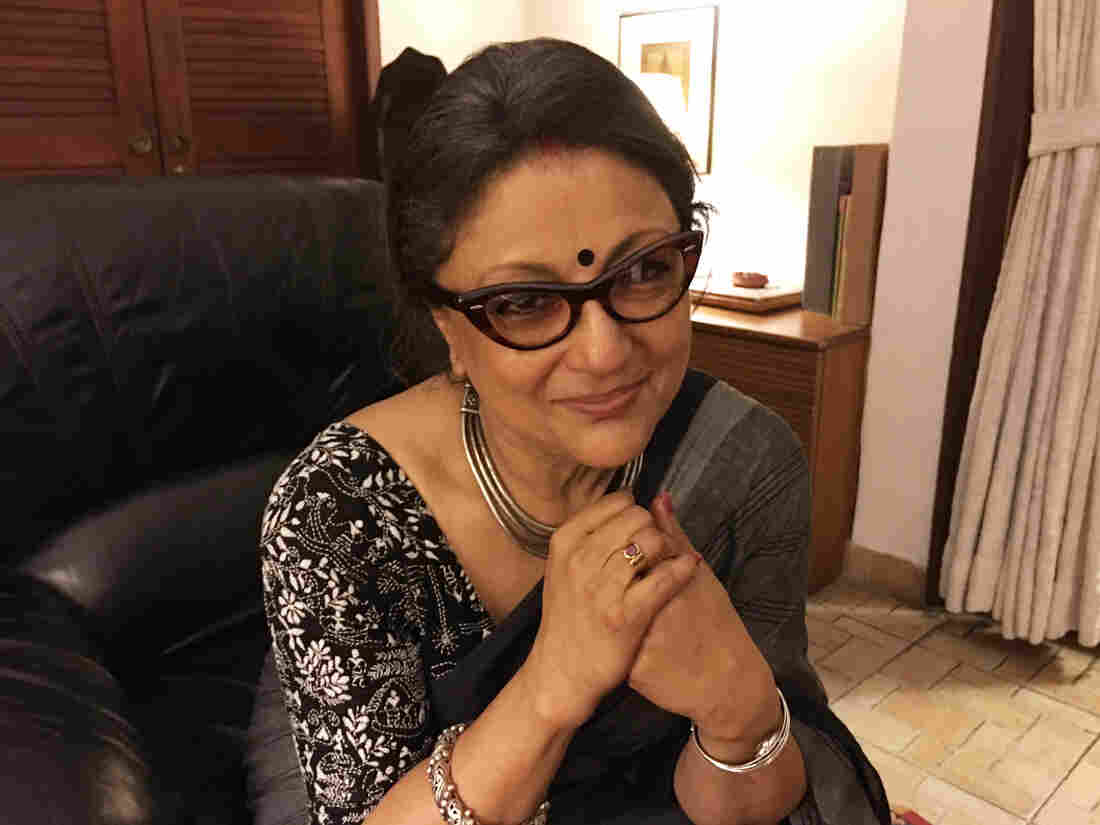 Sonata Director Aparna Sen is a veteran of the small, artistic cinema. She says while mainstream films often “commodify” women, “the good news is that many different films are now being made about women” and by women who are starting their own production companies. Julie McCarthy/NPR hide caption

Sonata Director Aparna Sen is a veteran of the small, artistic cinema. She says while mainstream films often “commodify” women, “the good news is that many different films are now being made about women” and by women who are starting their own production companies.

“It’s producers; it’s actors; it’s directors,” says Shrivastava. “Everybody’s complicit … in the creation of this kind of culture and the excuse is always, it works, it sells.”

Director Aparna Sen predicts that her film Sonata, released in April, won’t make money, but will break even — which she says counts as success for small, artistic films like this. She says such movies usually only run a couple of weeks in India’s theaters, where big mainstream films usually get the best show times. She was encouraged that hers was extended for a third week in Delhi.

There’s not a small bit of self-deprecation.

“What awful creatures we are,” one character says as another chimes in. “Self-centered, do nothing for society, no commitment, no aim, no ideology, we’re not even feminists!”

Urban, educated audiences might identify with the film, Sen says — but perhaps not mainstream moviegoers.

Director Sen also stars in the film, and her husband, author and professor Kalyan Ray, makes an appearance as her long-lost lover.

She says Indians are biased against women being single.

“If you are single by choice, they think that something is wrong with you; you’re flawed in some way,” Sen says. “Just the depiction of single women having a blast, having wine, you know, expressing their anxieties and loneliness — female bonding on cinema is very rare.”

Sheela Sehgal, a Delhi University literature professor, was among a handful of people watching Sonata in a Delhi cinema one recent Friday morning. She said it spoke to her.

“It’s the stark reality of Indian women,” she said. “They are not the younger generation, nor do they feel completely grown old. It’s that dilemma. We all will go through that phase.”

Sehgal, 43, wishes more films like this were being made.

“We’re a big country with a lot of women at that age,” she says. “I would love to blow all my money to go and watch this kind of movie.”

Perhaps the film that pushes the theme of women’s sexual choice farthest is Anaarkali of Aarah, released in March. It’s a portrait of a singer who earns a living performing suggestive songs before an all-male audience in small-town India. She is molested by a prominent local figure — but exacts revenge, shaming him in public during a performance.

“Anaarkali is promiscuous, she’s unapologetic about it, she’s a threatening person and she’s a bit mad,” Bhaskar says. She also triumphs in the end “by her own means. No man comes and helps her.”

Anaarkali of Aarah is meant to send a powerful message that no matter how seductive a woman may be or what profession she’s in, she still has the right to say no to sexual advances. “It doesn’t matter if she was dancing naked on the table,” Bhaskar says, “you still cannot touch her without her consent.”

It’s a message that resonates in the wake of horrific, high-profile incidents of sexual violence against women, like the fatal gang rape of a young woman in New Delhi in 2012.

The 29-year-old actress believes part of the movie’s appeal is that it depicts something that rarely happens in caste- and class-bound India: a marginalized member of society prevailing over a powerful one.

Anaarkali was not a studio-backed film, but a small, independent one, screened in 300 theaters the first week and taken down in most theaters the second week.

In five cities, though, it ran for five weeks, which Bhaskar says is “quite a feat.”

Critics enthused over it, including Shubhra Gupta of the Indian Express. “Indian cinema is in flux,” she says, and “feistier, stronger” women with “an individual streak” are going to have a “crossover effect” on mainstream movie-making.

It may be a while, though, before India’s mass culture — addicted to happy-ending love stories and fantasy adventures — is ready to embrace this path-breaking entertainment.