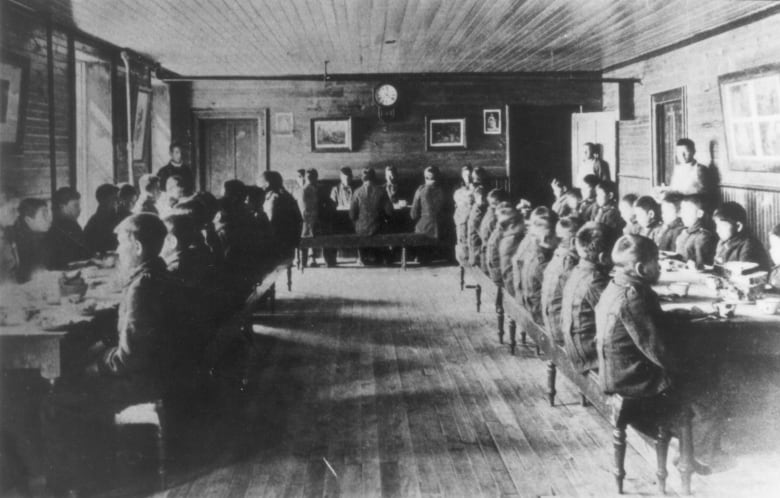 A federal official blocked a request by a survivor’s organization seeking access to a key register in a search for 100-year-old records they hope could identify four children who died at the Shingwauk and Wawanosh residential schools in Sault Ste. Marie, Ont.

After exhausting all research avenues, the Children of Shingwauk Alumni Association wanted to search the government’s Indian status register for the names of two boys and two girls who died while attending the institutions in the early 1900s.

Their bid was blocked this month by the official in charge of the register, citing privacy laws to deny a request to search the records.

“The information contained within the Indian Register System is personal and, as such, is limited to disclosing solely with consent or in compliance with the Privacy Act,” wrote John Gordon, the Indian Registrar, in a March 16 letter.

“It is not possible to grant you access for the purpose of conducting research.”

Irene Barbeau, 78, president of the alumni association, has since written Indigenous Services Minister Patty Hajdu and Crown-Indigenous Relations Minister Marc Miller asking they use their authority to grant the group access.

“It’s frustrating, it’s disappointing,” Barbeaeu said. “We thought there would be more reconciliation from their part, because they are the ones who created the mess we are in right now.”

The letter to the ministers states that the association is only seeking to search records dated between 1900 and 1920 held by the register and any other internal departmental databases.

“The only way left to identify these children is with the co-operation of the departments you lead,” said the March 24 letter.

“We cannot heal, and they cannot truly rest in peace, until their names are known.”

The Crown-Indigenous Relations department sent an emailed statement to CBC News last fall saying the federal government would be open to providing “access to information and records to help support reconciliation,” but that it was subject to the restrictions of the federal Privacy Act.

Miller and Hajdu’s ministerial offices issued a joint emailed statement to CBC News Tuesday that said the government had a “moral obligation to survivors to pursue the truth and ensure access to documents and records.”

The statement said the two ministers would work with their departments “to find a solution so that the Children of Shingwauk Alumni Association can continue their important work.”

Meagan McLean, a departmental spokesperson for the two departments, said in an emailed statement that officials plan to reach out to the association to obtain “additional information,” because previous searches “had been unsuccessful.”

The department statement did not say where officials had previously searched.

‘There is no barrier’

Vivek Krishnamurthy, a law professor at the University of Ottawa and the director of the Samuelson-Glushko Canadian Internet Policy and Public Interest Clinic, said there is nothing within the Privacy Act that prevents the federal government from providing access to the status register for the association’s specific purpose.

“We are talking about identifying children. This is a matter of utmost importance… there is no barrier to co-operation,” said Krishnamurthy, who has been helping the association in their efforts to access the records.

The Indian status register is used to determine who qualifies as a status First Nation person. It was established in 1951 and centralized identifying information about every individual deemed by the government to have status under the Indian Act.

It contains genealogical information on First Nations people dating back to the 1800s.

The federal government identified the register as a potential primary source in determining who attended which residential school, according to a 2003 internal department document outlining the workings of an early compensation system.

Records on students who attended the Anglican-run Shingwauk — for boys — and Wawanosh — for girls — residential schools in the early 1900s are sparse. For example, the federal government destroyed student lists for Shingwauk from the years 1907 to 1939, said Edward Sadowski, a researcher who has worked with the alumni association for decades.

The only evidence on the death of the two girls comes from a 1913 Indian Affairs report that said they were from Garden River First Nation and died from illness. The girls are not named, but the report notes that one girl was “always frail” and the other as “a poor little paralytic.”

The two boys drowned in a deep pond known as Little Lake behind Shingwauk between 1914 and 1915, but no record has yet been found that mentions their death, said Sadowski.

The only evidence comes from a 1981 Shingwauk reunion video and the testimony of a former staff member. The bodies of the boys remain buried beneath a park built atop the pond.

Sadowski said the association has searched through the Anglican archives, Library and Archives Canada and department records using the Access to Information Act. They have all come up empty, leaving the status register and other possible internal departmental databases as the only places left to look, he said.

“That is the only place left that has information related to Indigenous people and residential schools,” said Sadwoski.

“We’ve just run out of options to try to identify these children.”

The alumni association has so far identified 72 children who died at the two residential schools.