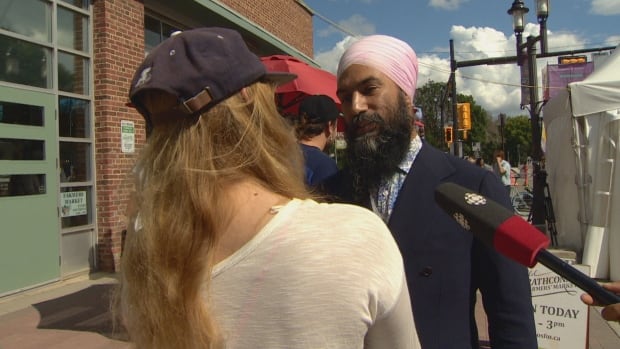 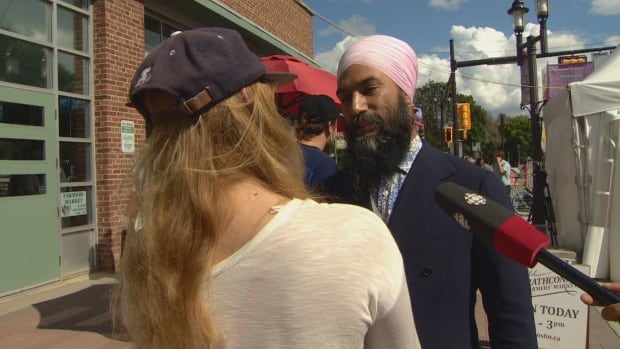 Federal NDP Leader Jagmeet Singh visited the party’s lone riding in Alberta on Saturday in an effort to build momentum in the province ahead of the fall election.

The New Democrats have failed to translate strong support for the Alberta NDP into gains at the federal level. Edmonton-Strathcona MP Linda Duncan, who is not seeking re-election, has been the sole NDP member in Alberta since 2008.

To make gains in Alberta, Singh said the party is differentiating itself from the Conservatives and Liberals.

“They don’t have to go through a red door or a blue door, they can choose an orange door and New Democrats will support them,” Singh said.

Singh didn’t deliver any show-stopping announcements as he toured the Edmonton Fringe Festival grounds with local candidate Heather McPherson. He echoed NDP platform promises to build 500,000 affordable housing units in the next 10 years and roll out universal pharmacare by 2020.

“We are committed to making sure we expand our healthcare system to make sure if you need medication in this country, in this province, you use your health card, not your credit card,” Singh said.

He reiterated his opposition to the Trans Mountain pipeline expansion on Saturday, days after the federally owned Trans Mountain Corporation sent out notices to mobilize the workforce it needs for construction.

Singh said he has met with oil sands workers who have to weather the boom and bust cycle of the energy sector.

“No matter how hard they work, commodity prices might go up and down and they might lose their jobs,” he said. “It’s not their fault. And I think that’s wrong and I think that’s unfair, so I want to build a more sustainable economy.”

The NDP is promising to create 300,000 green new jobs as part of a $15-billion climate change strategy.

The platform is not costed out, but Singh said it has been sent to the office of the Parliamentary Budget Officer for an independent review.

McPherson, the local candidate, is tasked with holding Edmonton-Strathcona in the upcoming election after the departure of Duncan.

“From what we can tell from all the door-knocking we’ve been doing is that the support is really strong,” she said.