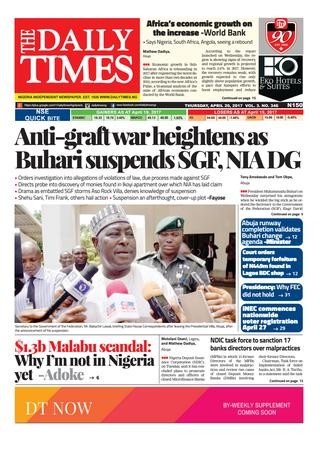 Former vice-president of the Badminton Federation of Nigeria, Frank Orbih,  and  the  Provost of the Niger State College of Education,  Prof. Farouk Haruna, are  said to be working across the country to convince voters ahead of the June 13 national sports federation elections in Abuja.

One of them is favourite to replace the immediate past  president  of the BFN Justice Danlami Senchi, who is now  the president of the Badminton Confederation of Africa.

Haruna, who has previously served as the technical director of the federation, is said to have the backing of many states in the North. Orbih, who is the Chairman of the Lagos State Badminton Association, is said to  enjoy the support of the South-West.

A member of the Kaduna State Badminton Association, Muhammad Sodangi, who spoke on behalf of Haruna, told our correspondent that the don  had  the support of 15 of the 19 states in the North.

“Prof. Haruna  is loved  in the North. He has the unrivalled support of 15 of the 19 northern states and we are working to get more states to support the dream,” he said.

“It is a known fact by badminton stalwarts that he  has the experience to steer the ship of badminton in Nigeria to greater heights. That is why the support is overwhelming.”

But  the Chairman of the  Osun State Badminton Association,  Tunji Omidiran, said  Orbih had been  working hard to convince more supporters from the North.

He said, “All the South-West are behind Orbih because we have seen what he has done  in the region. We also believe in what he can do as the president of the BFN. The South-East too has declared its  support for him ahead of his opponent. A lot of work is also going on in the North.”

“We  have some states already in support while the others are also being convinced to see what the sport can benefit with Orbih as president.”