On Sunday night’s wild episode of Famously Single, Dr. Darcy Sterling challenges the cast to step outside of their comfort zone, approach random strangers walking around Universal CityWalk and then invite them back to their apartment for a mixer.

Some of the celebs, specifically Calum Best and David McIntosh, fully embraced the mission to talk to new people. “You’ve got David just wrangling them up,” Ronnie Magro-Ortiz observed. “He was like a sheepherder, just bringing them in by the boatload!”

Meanwhile, Malika Haqq and Dorothy Wang were less than thrilled about the assignment. “Call me crazy, but I just don’t think the man of my dreams kind of just walking around on a Friday night,” the #RichKids of Beverly Hills star said. 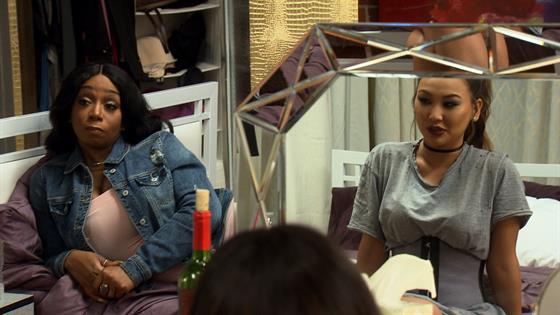 But once the event was in full swing back at the loft, Calum became noticeably irritated with Malika, Ronnie and Dorothy when he noticed they weren’t participating or interacting with the group.

“I looked at some people fully segregate themselves over in the corner and didn’t want to talk to other people,” he explained. “Something really put me off about that. There’s some high maintenance motherf–kers in my house, dude.”

Eventually, his frustration became too much that he decided to ditch the scene completely!

For more from the episode, including Chad Johnson‘s revealing one-on-one session with Dr. Darcy and Malika and Ronnie’s nonstop flirtation, check out the recap video above!