Famously Single Love Triangle? Dorothy Wang Gets a Kiss From Calum Best Just as Brandi Glanville Follows Her on Twitter

Dorothy Wang wants no part of this love triangle.

“He came and kissed you last night before he went to bed,” she revealed to Dorothy. “You was already asleep.” She continued, “I wouldn’t bulls–t about this because I was jealous! I just see him just dart out of the room. It’s almost like he didn’t want you to wake up. He wasn’t trying to get caught, but I caught him.”

“I had no idea!” the 29-year-old jewelry designer responds. “But out of nowhere last night, we were in the car on the way back and Brandi Glanville started following me on Twitter.” 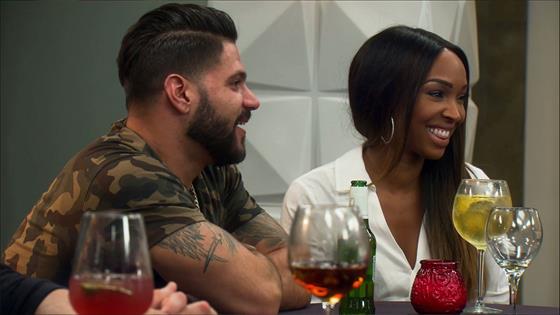 After the I Love New York star incorrectly assumes Brandi is a singer, Dorothy explains, “She was on this last season with Calum and they like were the item or they like dated or hooked up.”

“You know why she followed you?” Tiffany replies. “Keep your friends close, but your enemies closer! She knows that you’re competition.”

“But I don’t want to be that person on this season,” Dorothy admits. Tiffany definitely can’t argue with that! “You can’t be that person,” she says. “You’re too self-absorbed to ever be that person!” LOL!

See their honest girl talk session in the clip above!