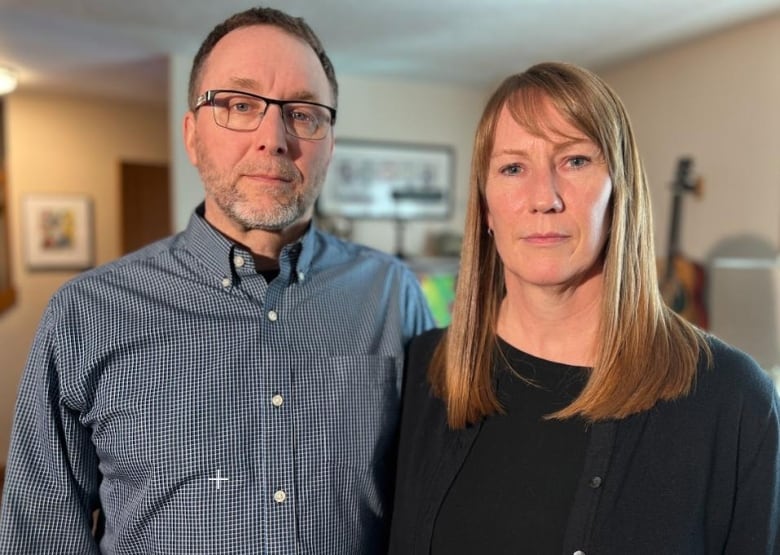 Thomas is charged with second-degree murder. Police identified the victim as his girlfriend Emily Sanche.

Bryan said Sanche, a 25-year-old University of Saskatchewan psychology grad, hoped that her detailed outline would help get Thomas admitted to hospital and assessed for his increasingly bizarre behaviour.

Thomas’s parents, Bryan and Sandi, were concerned with his escalating delusions and frustrated by their inability to get the medical help they believed he needed — both before and after Sanche’s stabbing.

Thomas spent more than a month on suicide watch at the Saskatoon jail after the stabbing — even though the court had ordered him sent to the province’s main psychiatric hospital — because there was not enough space.

CBC reached out to Sanche’s parents, who provided a statement.

“While we are eager to understand the events that led to our daughter’s tragic death, we believe it is inappropriate for anyone, including the CBC and us, to comment until evidence from the police investigation becomes available,” the statement said.

Sanche prepared the timeline document on Saturday, Feb. 19, with Bryan planning to take his 25-year-old son to the emergency room at Royal University Hospital the next day. It would have been their son’s third ER visit since December.

A text to Bryan from Sanche, timestamped 4:48 p.m. CST on Feb. 19, indicates she had typed up the document and included a Google drive link to where it could be viewed.

But Bryan never got to take his son to the hospital.

“It was early Sunday morning when I got the call,” Bryan said in an interview.

“Whatever was happening, it happened. And somehow she dialed my number and I didn’t hear her, but I could hear Thomas screaming in the background that they’re out to get him. ‘They’re over there, help me get them.’ And that will stay in my memory forever.”

Bryan called 911 and went to the young couple’s place on Main Street. Both had already been taken to hospital. In addition to attacking his partner, Thomas had also slashed his own neck and stabbed himself in the chest, Bryan said.

Sanche, who had been one year into a Master of Counselling psychology degree program, died 25 days later. Thomas was initially charged with aggravated assault, but police said Monday the charge had been upgraded to second-degree murder.

“This could have all been avoided. All of this,” said Sandi.

“These two kids, their lives are ended and ruined because no one would listen to them. I’d like to see the health system have to show some accountability for this.”

‘They were a great couple’

Thomas met Sanche in high school and they began dating after they graduated. She got a psychology BA with high honours at the U of S and then went on to pursue her master’s degree at University of Lethbridge, while Thomas had just completed a double degree in psychology and sociology.

“They were a great couple, very much in love with each other.”

The young couple moved in together in the summer of 2021. Bryan said his son began having “intrusive thoughts” by late fall.

“Just all sorts of thoughts that were not actually true,” Bryan said.

“He talked to her [in December] and let her know that he was having these intrusive thoughts. And that’s when [she] and Thomas came to us and let us know.”

The timeline document begins in early December, when Thomas began to “remember” things that had never happened. These included being bullied and individuals spreading rumours that he was a predator.

CBC reviewed the timeline, along with dated and time-stamped texts.

By later that same month, Thomas believed he was being spied upon and that he’d had an altercation with police, the document said.

By January, he was telling her that someone was breaking into their place at night and moving around objects and that people he knew had been replaced by “fakes,” it said.

Sanche took Thomas to the emergency room at Royal University Hospital on Dec. 18 and then again on Feb. 9. The first trip came after speaking with Thomas’s psychologist, who was concerned that he was in a “mental health crisis” and should go to a hospital, the timeline said.

“She was able to go in with him and she tried to explain what was going on but was, in her words, she was ignored,” Bryan said.

The timeline shows that Thomas did meet with psychologists and psychiatrists at different points, but it never went further than those initial meetings. Further complicating matters, he was already seeing a psychologist and taking medication for obsessive compulsive disorder (OCD).

“[Doctors] said it was severe OCD and to keep taking his medication. And the second … said no sign of psychosis, so far seemed to be fine,” Bryan said.

Sandi said her son did not necessarily present as someone in crisis.

“He’s too damn articulate and so people brushed it off,” she said.

“And so those of us who love him, we could see the signs of agitation or anxiety building up in him. But someone who doesn’t know him can’t magically read his mind.”

Sandi added they just wanted their son in care.

“We were hoping he’d be admitted to the Dube Centre, where he could be in a secure place and get some professional help. Hopefully see a psychiatrist and help to determine what’s going on so that these things could be addressed medically first, and then through counselling,” she said.

“Our mission at that point was to get him admitted into care where he could be looked after.”

Between December and the February assault, Thomas had been to the emergency room twice, had a phone call with a psychiatrist, had seen his family doctor and been seeing a counsellor.

“We just wanted someone to finally listen to us and to him and hear that this is a young man who needs help. And they just didn’t,” Sandi said.

Sandi said there was no indication of Thomas being violent toward himself or anyone else.

The Hamps say the health-care system is continuing to fail their son — even after the fatal assault.

Since his arrest in February, Thomas has remained at the Saskatoon Correctional Centre. A provincial court judge had ordered him sent to Saskatchewan Hospital in North Battleford for a psychiatric assessment, but he was instead taken to the jail because there were no beds available at the hospital.

“This boy had what we believe is a psychotic break. He was injured. His girlfriend was fatally injured,” said Sandi.

“They took him to the correctional centre where they put him in a jail cell, still not mentally stable from the psychosis or whatever. It started all of this. So it went from a traumatic situation to adding more and more layers of trauma. And now, a month later, he is still in the corrections centre. He’s on a med unit on suicide watch.”

The Saskatchewan Health Authority (SHA) said it cannot disclose specific information on any admission or patient.

SHA spokesperson James Winkel said that “not all beds are yet operational due to a number of factors including patient flow, patient placement assessments, and recruitment.”

“This [patient] number changes regularly due to discharges, new admissions and is impacted by staffing levels and COVID case management,” Winkel said.

“What I’m seeing is that mental health illness is very widespread and there isn’t the means to help,” he said.

“As a society we’re measured by how we look after the vulnerable and the people with mental illness. And we’re failing.”