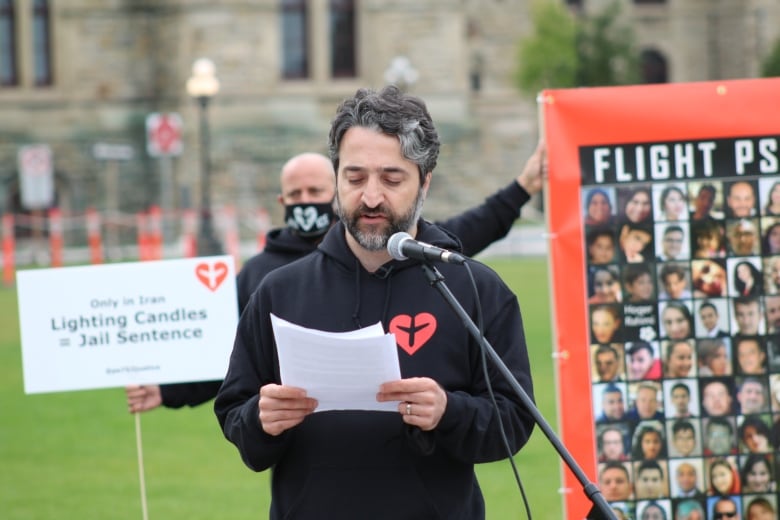 Families who lost loved ones in the destruction of Flight PS752 held protests today in cities across Canada, the U.S., Germany and the United Kingdom to demand justice.

Iran’s military shot down the Ukraine International Airlines flight shortly after takeoff in Tehran on Jan. 8, killing all 176 passengers onboard — including 55 Canadian citizens and 30 permanent residents.

Iran’s Civil Aviation Organization released a preliminary report in August and said that only 19 seconds of the cockpit conversation was recorded after the first missile strike — but did not reveal details of what that recording captured. A second missile hit the plane 25 seconds later, according to Iran.

Several Canadian cabinet ministers said the report provided only “limited and selected information” and demanded that Iran explain why the airspace over Tehran was kept open on a night of heavy military activity, and why the missiles were launched in the first place.

More than two dozen family members and friends spread out on Parliament Hill in Ottawa this afternoon wearing matching black masks with the word “justice” on them. It was one of six rallies that took place in Canada today; other rallies went forward in Edmonton, Toronto, Montreal, Winnipeg and Calgary.

Hamed Esmaeilion took to the microphone in Ottawa on behalf of the association representing victims’ families in Canada with a list of demands. He lost his wife Parisa Eghbalian and her nine-year old daughter, Reera, in the crash.

“The families demand there must be a fair, comprehensive investigation without any interference by the Iranian government,” said Esmaeilion.

Families are also calling on countries that lost citizens in the tragedy to publicly release any information they’ve obtained about what happened.

Canada announced last Friday it’s creating its own forensics and assessment team to “collect, organize and analyze all available information, evidence and intelligence” about Flight PS752. The former deputy director of operations at the Canadian Security Intelligence Service, Jeff Yaworski, is heading the team, which also includes representatives of several government departments and agencies.

“The evidence, the witnesses, the site are all within the control of Iran,”Goodale said as he attended the protest on Parliament Hill today. “Therefore, the other countries that were so tragically affected like Canada and others … to gain access to that information requires a complex pursuit of international procedures.”

The forensics team will “double-check, triple-check and critique” what Canada is hearing from other authorities including Iran, he said.

“To make sure every question is properly asked, and every answer is properly given,” said Goodale. “Where there’s a gap or a defect or deficiency in our view, this forensics team will be able to point out exactly what those defects are.”

Foreign Affairs François-Philippe Champagne said Canada will not be “intimated ever by an Iranian regime who would not want us to get to the bottom of this.”

The families are also calling on the countries that cooperate through the International Civil Aviation Organization to adopt a resolution condemning the destruction of Flight PS752. In 2014, the 36-state council condemned the downing of Malaysia Airlines Flight MH17 over eastern Ukraine.

“I have said many times I want ICAO to do more to uphold the air safety international convention,” he said. “They should take ownership of what needs to be done next to bring justice, but also support the Safer Sky Initiative Canada’s been launching.”

ICAO said it has “urged the Islamic Republic of Iran to conduct the accident investigation in a timely manner” and in compliance with international conventions. ICAO spokesperson Anthony Philbin also said its council did adopt new standards and recommended practices on conflict zone risk assessments and responsibilities.

Ukraine meeting with Iran this month

Andriy Shevchenko, Ukraine’s ambassador to Canada, said his country is scheduled to speak with Iran over Oct. 18-21 to raise concerns on behalf of five countries that lost citizens. The talks are expected to cover a broad range of issues, including compensation for victims’ families.

“We are not satisfied with the amount of information we get from Iran,” Shevchenko told CBC News at the Ottawa protest.

Masoud Pourjam’s brother Mansour died in the crash and he is still haunted by what happened. He said he still wakes up around 3 a.m. most mornings — the same hour he learned his brother had died.

“It’s still a nightmare for me,” said Pourjam. “As days go by, I still have no closure for that.”

Mehrdokht Hadi drove from Toronto to attend the rally in Ottawa after losing two of her friends on the flight.

“Everybody’s lives have been touched,” she said. “Our lives are not the same after what happened that night.”