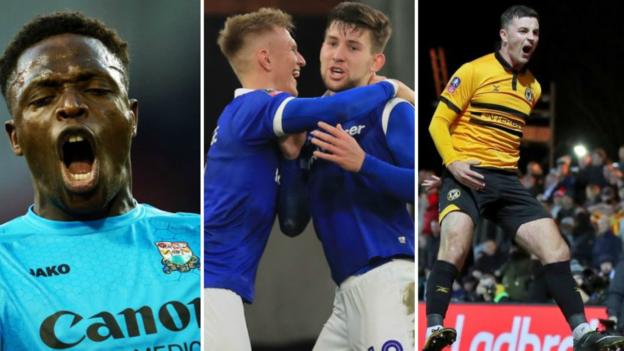 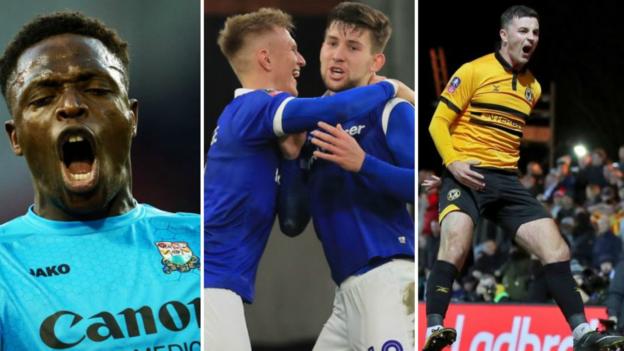 Newport County, 13th in the fourth tier, had failed to win their previous five league games but took the lead against Claude Puel’s Leicester through Jamille Matt.

The Foxes, Premier League champions in 2015-16, thought they had salvaged a replay after Rachid Ghezzal’s late equaliser.

However, the Welsh side won a penalty when Marc Albrighton inexplicably put his arm up to block a cross in the penalty area – Padraig Amond keeping his composure to score from the spot.

There were scenes of jubilation at Rodney Parade at the final whistle. Newport knocked Championship Leeds United out at the same stage last season before losing to Tottenham in a fourth-round replay at Wembley.

National League side Barnet had not reached this stage of the competition since 2008, and on that occasion they secured a spot in the fourth round – it was a case of history repeating at Sheffield United.

The Bees held on for more than 77 minutes for their 1-0 win after Tottenham academy graduate Shaq Coulthirst had given them the lead from the spot.

Oldham, three-time semi-finalists, fought from a goal down to beat Fulham 2-1 in a match that was incident-packed in the final 14 minutes.

Denis Odoi gave Fulham the lead shortly after the interval before Sam Surridge levelled from the spot in the 76th minute. Claudio Ranieri’s side were then awarded a penalty after Tom Cairney had been fouled – the video assistant referee confirmed referee Anthony Taylor’s decision despite there appearing to have been little contact made by Christopher Missilou.

Substitute Aleksandar Mitrovic missed the spot-kick before Callum Lang headed in what proved to be the winner in the 88th minute.

Any idea of a cup upset at Etihad Stadium was extinguished in the first half as Manchester City scored three times against struggling Championship side Rotherham. Former youth player Phil Foden’s goal received the biggest cheer from the home support – it was his first at the ground.

The 2011 winners scored four more after the break as they ran out 7-0 winners in a ruthless display.

Veteran football commentator Martin Tyler was marching the touchline at Laithwaite Community Stadium, along with manager Alan Dowson, but the pair could not guide National League South side Woking to a shock win over Premier League visitors Watford, who secured a 2-0 victory.

Tyler, a lifelong Cards fan who joined as a volunteer coach when Dowson was appointed in May, took the role of assistant manager on Sunday.

League One side Doncaster reached the fourth round for the first time since 2010 with a 3-1 win at Championship club Preston.

Substitute Shane Ferguson came off the bench to score twice in the final 10 minutes as Millwall knocked fellow Championship side Hull City out with a 2-1 win.

And Championship leaders Leeds United will now have to solely focus on their bid for promotion to the Premier League as they succumbed to a 2-1 defeat by play-off hopefuls QPR.