Extreme drought in southern B.C. taking devastating toll on life in water and on land 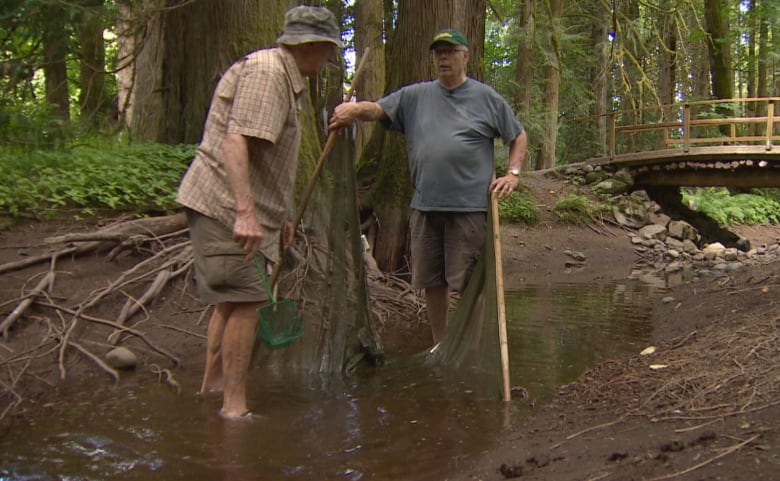 What was once a steady stream of cool, clear water had become a patch of shallow, muddy puddles.

Inside these remaining pools not far from the town of Squamish, B.C., three-month-old salmon the size of small french fries were struggling to survive. Its name — Swift Creek — belies its current state, with large sections having dried up due to drought.

At one end of a puddle only a few centimetres deep, Jack Cooley deployed a fine mesh net about two metres across. Another volunteer, Patrick MacNamara, started at the other, splashing the water to scare the fry into the net.

“There’s some wee tiny ones,” MacNamara said, as the coho salmon darted out of his way.

Soon they were scooped up and placed into a bucket with clean water, complete with a battery-powered pump to keep it aerated.

Within a couple of weeks, and no rain expected, he said, this area would be completely dry.

“I think it’s crucial, I do, otherwise they would just die,” MacNamara said of the effort to capture the fish and move them somewhere safer.

Cooley used to be an avid recreational salmon fisher, but he now spends his time trying to keep wild fish alive in streams like this one.

The lack of rain since mid-June in the Vancouver region is breaking records and has led to steadily decreasing water levels in many parts of the province.

Spawning salmon are also at risk because warm water, coupled with low stream flows, can stress out the fish, leading to high mortality at a time when low numbers of salmon are expected to return to B.C.’s rivers.

The province’s largest salmon river, the Fraser, is warmer than usual and has 27 per cent less water than normal, according to the federal Department of Fisheries and Oceans.

On the other side of the province, in the West Kootenay region, the dust is flying at Matthew Carr’s normally lush organic farm. It, too, is in a Level 4 drought, the second-highest danger level on B.C.’s drought scale.

“Our soil has become hydrophobic; it’s very dusty, airy and light. It’s very difficult to walk or pull carts through the field,” he said.

Carr grows a mix of vegetables and small fruits in Krestova, in B.C.’s southeast. Even with irrigation, some crops have been scorched and discarded.

“It would be 15 to 20 per cent crop loss so far this year, especially in our lettuce — like we’re up to one-third of our lettuce crop we’ve lost, and it’s a big part of our income and cash flow.”

Carr said other, heat-loving crops have been doing better, such as melons.

It’s not unusual to have hot summers, he said, but this year has been unique because of the early start of the dry spell.

“We typically would see temperatures and conditions like this in August, but to see them in late June all the way through July was really unexpected. And I know a lot of other farmers had to go into triage mode just like we did.”

Interviewed in an unusually dry Vancouver bog that’s home to a diverse range of rare plants, Hans Schreier, a professor emeritus of land and water systems at the University of British Columbia, said the drought is just one of many unusual weather patterns around the world being driven by climate change.

“It’s getting precarious, no question about it.”

Schreier rattled off a recent list of climate disasters, including fires in western North America, floods in China and Europe, and water shortages in Iran that have sparked riots.

He said it’s becoming increasingly difficult to predict weather because old, reliable patterns are breaking down.

Schreier said governments around the world have been very slow to adapt and prepare for those extremes.

Back in the woods near Squamish, streamkeeper Patrick MacNamara worked at completing the rescue of the salmon fry. They’ve been safely transported in a bucket to a new location on the Cheakamus River just a few minutes away, but with much deeper water and shade.

“There’s food, it’s clean water and lots of places to hide,” MacNamara said as he waded into the water, where he slowly dumped out the bucket holding the fish.

“Here they come!” he exclaimed, before wishing them “bon voyage” as the fish darted out into their new home, safe for now from the ongoing drought.