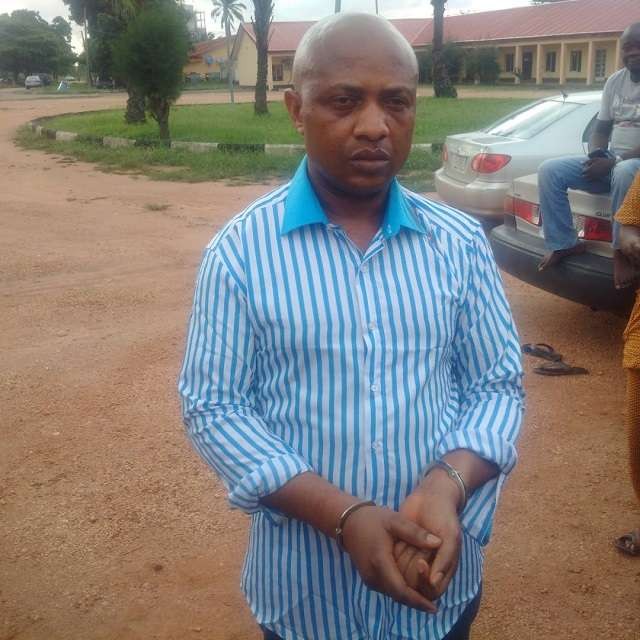 Mr Donatius Dunu, the Managing Director of Maydon Pharmaceuticals Ltd,  Lagos, on Friday told an Ikeja High Court how he was kidnapped and held for 88 days by the suspected kidnap kingpin, Chukwudumeme Onwuamadike alias Evans and his gang.

Dunu, who was led in evidence by Mrs Titilayo Shitta-Bey, the Lagos State Director of Public Prosecutions (DPP) in a lengthy four-hour testimony.

The pharmaceutical boss, the second prosecution witness, began his testimony by identifying his alleged captors.

Removing his spectacles and pointing to the defendants in the dock, he said: “I know this one he is Evans, I know the second one he is Uche and I know the fourth one he is Congo.”

“I suddenly saw an SUV in front of my car, I wanted to reverse but two people came out of the SUV holding long guns.

“They pointed the long guns at me and dragged me out of my car and pushed into the booth of the SUV, covering me with a car cover, someone lay on top of me and I was taken to an unknown place.

“On our way, they brought out a locally made iron and bound my hands with and when we had reached the unknown place and while face down I was taken to a bungalow.

“In the parlour of the house, they started asking for my name, my wife and children’s name as well as the name of my hometown.

“After telling them, their chairman asked them to bring guns, a very long gun and a black and silver pistol was brought, they showed me the guns and Ak47 was written on the long gun.”

Dunu said after giving his personal information, the kidnap gang demanded a ransom.

“They said now that I have said all these things, it is confirmed that I am the person that they are looking for and I have to pay the `bail’.

“Their chairman said that I should give them `their money’ and that it has to be complete and that nothing must remain.

“The chairman is Evans, he is their boss, after they made their demands they put me in a dark room.

“Their money was the money that they wanted to take from me, they had not mentioned any amount at this point.

“When I was taken to the dark room, I was asked to remove my clothes and I was given a pair of boxer short to wear and I was blindfolded where I remained till April 10.

“That night, they brought a phone that their chairman wanted to speak to me, the chairman told me that I was nobody on earth can bring me out that it is only God that will bring me out.

“He said that if I should prove stubborn, he will give me an injection that will make me forget myself in life and that he can also ask his boys to use pillow to suffocate me that no one will know about it.

“He asked where I have warehouses and he also asked me why I used to go to Alaka Estate in Surulere, I told him I have a friend there but one of my warehouses are in Eriaka Street and I have two other warehouses in Alao Estate, Lagos.

“He asked for the addresses and I told him I didn’t know the addresses, he told me that he heard that I gave my staff 40 Toyota Corolla cars and he heard I pay my graduate staff N50, 000 per month,” he said.

Dunu added: “I told him yes that the N50, 000 was for their take home but it was like a contract that if they make their target for the sale of good, they earn a commission.

“The phone call ended and three or four days later, the boys brought the phone to me telling me that my bail is 2 million dolllars.

“Giving me the phone, I started pleading with him that even our entire family does not have such money, after my plea the money came down to 1 million dollars and they took back the phone.

“After three days, they brought back the phone and they told me that my fee is no longer 1 million dollars but 1 million euros, that he has got more information about me and the phone was taken away.”

The CEO told the court that the kidnappers contacted his older brother, Mr Anselem Dunu, for the ransom, noting that he was tortured and beaten every time his brother was on the phone with the kidnappers.

“I was in a very bad condition when we were negotiating the ransom, they removed my mattress and I was made to sleep on the tiled floor.

“When I told my brother about the ransom, he started crying that where are we going to get that kind of amount in an economic recession.

“Anytime they called my brother they will beat me for him to hear my cries, I told my brother to get to know sources where we can borrow money from.

“At a point he said they were able to raise N60 million that when I come out, they will get the remaining money from me.

“He said I and my brother are talking rubbish and that he should change the money into euro as agreed.

“There was a time the Naira appreciated so much sometime in March last year that he (Evans) asked not to change it to Euros anymore.

“Later when the Naira depreciated, he asked them to go back to Euros, I pleaded with him that Euros was hard to change and his boys later told me to ask for a discount.

Dunu said his communication with his brother was done via conference call with Evans on the phone line.

“My brother pleaded that they should take the 223,000 euros and that when I come out they will get the balance.

“He (Evans) got annoyed, he told my brother that he will be the one to bring the ransom to them that he will see how he will go home alive and if he brings the money, he will be shot.

“My brother responded that their money is in the bank and that he will never bring the money and that his driver will deliver the money.