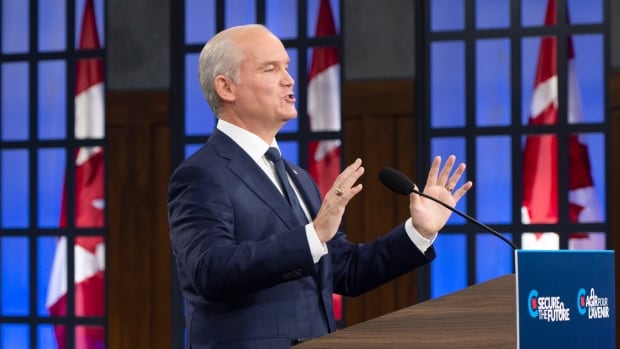 O’Toole ducked questions for nearly a week about the Liberal government’s plan to implement a vaccine mandate for bureaucrats, transportation workers and most passengers travelling by air and rail, a program Ottawa says will help boost stalled vaccination rates at a time when COVID-19 case counts are on the rise.

O’Toole said the Liberal plan is a divisive one and Canadians instead “want a reasonable and balanced approach that protects their right to make personal health decisions.”

Rather than require public servants and travellers to get a shot, O’Toole said, if elected, he’d demand they pass a rapid test before going to work or boarding a bus, train, plane or ship.

“What they do not want is the politicization of the pandemic. Vaccines are not a political issue. To try and make them one is dangerous and irresponsible,” O’Toole said.

“We should be united on this, not divided, and Conservatives will not engage in this attempt to drive a wedge between Canadians.”

The Conservatives have been highly critical of the government’s handling of the immunization campaign and the procurement process for COVID-19 shots, suggesting for weeks that Canada was at the “back of the line” on deliveries and it may not be “until 2030” that people are vaccinated.

After a slow start in the early months of this year, Canada is now a world leader in immunizations with more than 81 per cent of the eligible population vaccinated with at least one dose. But the pace of administering doses has slowed considerably since a blitz in April and May, with well below 100,000 first shots handed out each day.

Based on a CBC News estimate, more than 5.7 million eligible Canadians have still not received a dose even though there is ample supply in virtually all parts of the country.

At his campaign launch Sunday, Liberal Leader Justin Trudeau said this election is a chance for Canadians to weigh in on how the government approaches the next phase of this pandemic — including a push to bolster these sagging vaccination rates through workplace measures like mandatory shots for some employees.

“We’ve seen situations where Conservative backbenchers have weighed in on some of this government’s decisions as tyrannical in terms of how we’re creating mandates for vaccination of public servants or vaccination of people on trains and airplanes,” Trudeau said, referencing remarks from Conservative MP David Yurdiga, who said last week that forcing federal workers to get a vaccine is a “tyrannical” idea that should give all Canadians pause.