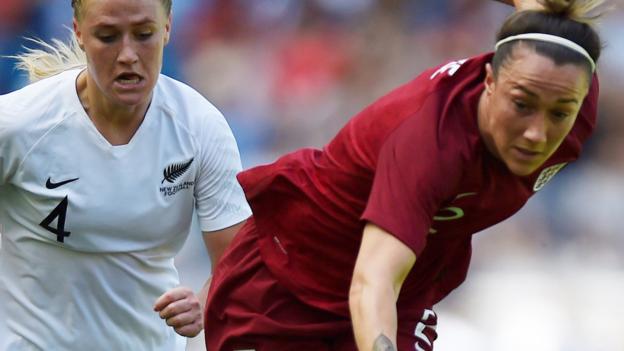 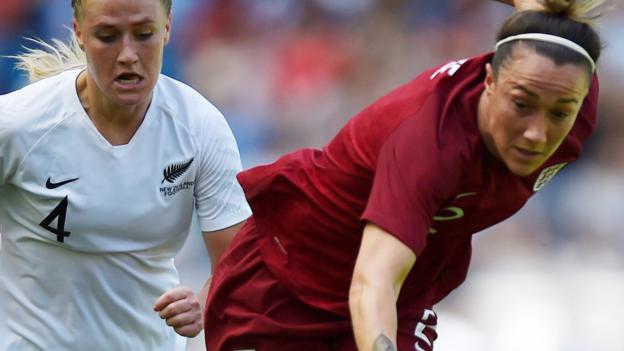 England women’s manager Phil Neville insists his side’s defeat in their final warm-up game will not change their preparations for the Women’s World Cup.

The Lionesses were beaten by a resilient New Zealand at Brighton’s Amex Stadium, with Sarah Gregorius scoring the game’s only goal early in the second half.

“A bad result isn’t going to change the way we go about things,” Neville told BBC Sport. “The players know we are on the right track.

“It was frustrating, we played some really good football but once they got a goal it was always going to be difficult. The girls gave everything, they’ve worked hard.”

Neville revealed in his post-match press conference that England were missing four players on Saturday because of ‘minor knocks’.

But he stressed that Demi Stokes, Rachel Daly, Mary Earps and Jade Moore should all resume training on Wednesday, and none of them were doubts for 9 June’s Scotland game.

“The disappointing thing is that we got an unbelievable crowd here and we haven’t got the win they deserved. The real thing starts next week,” Neville added.

“Certain players needed minutes. We will need every single player to be up to speed for the tournament.”

The visitors took the lead shortly after half-time from only their second attack, as Gregorius poked home on the rebound after Carly Telford spilled Rosie White’s shot, amid some slack England defending.

The home side created the vast majority of the chances, dominating the possession and territory, but were unable to find a way through in front of a crowd of 20,076.

The defeat was England’s second in four games of their ‘Road to France’ series, following April’s 1-0 loss to Canada and well-deserved victories over Spain and Denmark.

The Lionesses get their World Cup campaign under way against Scotland in Nice on Sunday, 9 June after hosts France open the tournament against South Korea on Friday.

England, who are among the pre-tournament favourites to win the world title this summer, will then face Argentina on 14 June and 2011 champions Japan on 19 June, with Neville’s side bidding to improve on 2015’s third-place finish.

Should England top Group D, a last-16 meeting with New Zealand in Valenciennes on 23 June is not beyond the realms of possibility, with the winners of Group D set to meet a third-placed side from Group B, E or F, and the Football Ferns are the third-highest ranked side in Group E.

New Zealand, who had won three and lost three of their previous six games in 2019 – including a 5-0 defeat at the hands of the United States – are ranked 19th in the world and England will see this result as a significant disappointment on the eve of this summer’s finals.

Yet, after half an hour, the prospect of an England loss had seemed extremely unlikely, after they carved out countless openings but Jodie Taylor and Nikita Parris were unable to hit the target.

However, moments before half-time, Telford had to produce a fine save with one hand to tip Betsy Hassett’s powerful effort over the bar, from what was the Football Ferns’ first notable attack, and they opened the scoring from their second just the other side of half-time, as 31-year-old Gregorius reacted fastest to capitalise on Telford’s uncharacteristically-fumbled save.

Jill Scott nodded wide at the far post from fellow substitute Karen Carney’s left-wing cross as the home side searched for a late equaliser, and captain Steph Houghton headed on to the roof of the net from a corner, but England were frequently restricted to shooting from range.

Lyon right-back Lucy Bronze was key to England’s dominance down the right flank in the first half, with her overlaps and link-up play with Nikita Parris leading to a host of chances.

Bronze – who is arguably the world’s best in her natural position – was on the receiving end of a few heavy challenges and hobbled briefly after one towards the end of the first 45 minutes, but was able to run off any knocks.

Neville will be desperate to have her fully fit for the finals, after she put in yet another tireless performance full of grit, strength and her usual positional awareness.

As part of #changethegame, BBC Sport has produced a documentary with exclusive access to England’s preparations for the World Cup finals in France next month.

Highlights include their trip to Qatar for a training camp with a difference and the Lionesses lifting the SheBelieves Cup.

The film also shows what life is like for the squad and hears about some of their back stories. Lucy Bronze explains about living in France at one of the world’s top clubs, and Karen Carney relives her horrific experience at the hands of social media trolls. We see how Phil Neville copes with the challenges of selecting the final 23 and the moment when Leah Williamson finds out she has made it.

Steering us through this emotional and inspiring documentary is former Lioness Alex Scott.