Elderly renters given short notice of 43 per cent rent hike 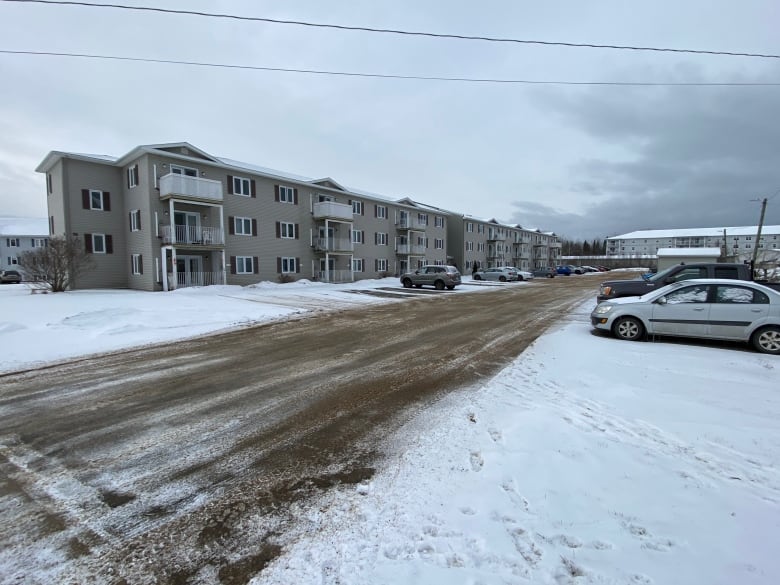 Tenants of another New Brunswick apartment building, including several elderly residents, are facing double-digit rent increases that a new landlord is trying to impose twice as fast as New Brunswick allows.

Eighty-two-year-old Irene Murphy has lived in the 45-unit building at 35 McKnight St., on the north side of Fredericton, for the last 10 years.

She received a letter on Dec. 31 stating that her rent would be increasing by $390, to $1,300 a month, on April 1. It’s a 43 per cent increase Murphy says she and several of her neighbours, who received similar notices, can’t afford to pay.

“Oh my goodness, they are so upset, because a lot of them are on strictly Old Age Pension, and Canada Pension for some of them, and so they don’t have much of an income coming in,” said Murphy.

She said a friend of hers, who lives in the same building, told her the rent increase would leave her strapped.

“She told me yesterday that by the time she paid everything that she had to pay with this rent increase — and that’s without groceries — she’ll have $85 left over.”

Murphy and her friends join a growing list of tenants in a number of New Brunswick buildings facing a choice between steep rent hikes and hunting for new housing during one of the worst waves of the COVID-19 pandemic.

Building bought in November for $6.7 million

Murphy’s building was purchased in November by a numbered company based in Halifax for $6.675 million, 67 per cent above its assessed value.

CBC News was unable to reach company president Sean Kearney at his office address in Bedford, N.S. Kearney lists himself as a real estate investor with Next Level Properties on LinkedIn.

According to that listing, Next Level Properties assembles investors looking for returns from the purchase of lower-grade real estate.

“From Trash to Cash, we team up with busy professionals who have no free time and are looking for additional income to help with retirement, family obligations or freedom to do what they want by providing them with monthly cash flow,” reads the description of the group’s investment strategy.

According to property records, at least 21 investors from Alberta and Ontario are helping to finance the Fredericton building in exchange for interest payments on their money of 11 per cent this year.

The new owner brought in K Squared Property Management of Moncton to operate the building, and it was K Squared that delivered the rent increase notice.

In its Dec. 31 letter to tenants, K Squared said higher rents would begin in three months, on April 1, although New Brunswick adopted new rules in mid-December that require tenants be given six months’ notice of increases in most cases.

“We apologize for any inconvenience this may cause and we appreciate your understanding and cooperation in this matter,” read the letter to tenants.

It was unclear whether K Squared was aware of the new notice requirements or ignored them. The company did not respond to a CBC inquiry about the issue.

The agency Service New Brunswick includes the Residential Tenancies Tribunal, which polices tenant and landlord issues. In an email, Jennifer Vienneau, the communications director with Service New Brunswick, said the new rules about rent increase notices have been in force since Dec. 17, and are clear.

“These legislative changes apply to all lease agreements, including those signed before the Act was amended, and to week-to-week, month-to-month and year-to-year rentals.”

Jael Duarte, a Fredericton lawyer and New Brunswick Coalition for Tenants Rights advocate, said she was contacted by some of the residents on McKnight Street and is working at no cost to have the three-month notice they were given struck down and reissued.

Duarte is unsure why improper notice was given to McKnight Street tenants.

“Ignorance of the law is not an excuse,” she said. “And they’re landlords. They have to know it’s a negligent act on their part to send a three-month notice.”

Either way, Duarte said, the notice has been “scaring” many in the building.

If new six-month notices have to be issued in January, that could give residents until Aug. 1 before rent increases can be imposed.

However, Duarte said that won’t solve the larger problem of elderly tenants being priced out of their homes with no idea of where to go.

“It’s really, really unfair for people in the middle of Omicron to have to go outside to look for a place,” she said. “They are clearly independent. They live on their own. They don’t need nurses, they don’t need help. But they won’t be able to pay [more rent], so that will change their life.”

Researchers in New Brunswick have begun raising concerns about the effect large rent increases are having on seniors.

In an interview last month, Julia Woodhall-Melnik, an associate professor and director of the laboratory for housing and mental health at the University of New Brunswick, said housing insecurity among elderly tenants is a growing issue.

She said that with the older adults in a survey the lab is currently conducting, “we’re really seeing they are very vulnerable.”

“There’s not much out there to help them,” Woodhall-Melnik said. “It’s really problematic.”

Some provinces limit how much tenants can be charged. For example, on Jan. 1, Ontario announced that rent increases for tenants will be limited to 1.2 per cent in 2022, slightly lower than Nova Scotia’s cap of two per cent.

But in New Brunswick, Premier Blaine Higgs has argued such controls on rent discourage investment in new housing. The province opted instead to lengthen notice periods and to forbid more than one increase per year.

Irene Murphy said seniors like her and her friends could use more protections than they currently have.

“I definitely think that there should be a rent cap put on,” Murphy said. “And I don’t think that it should be more than five per cent.”