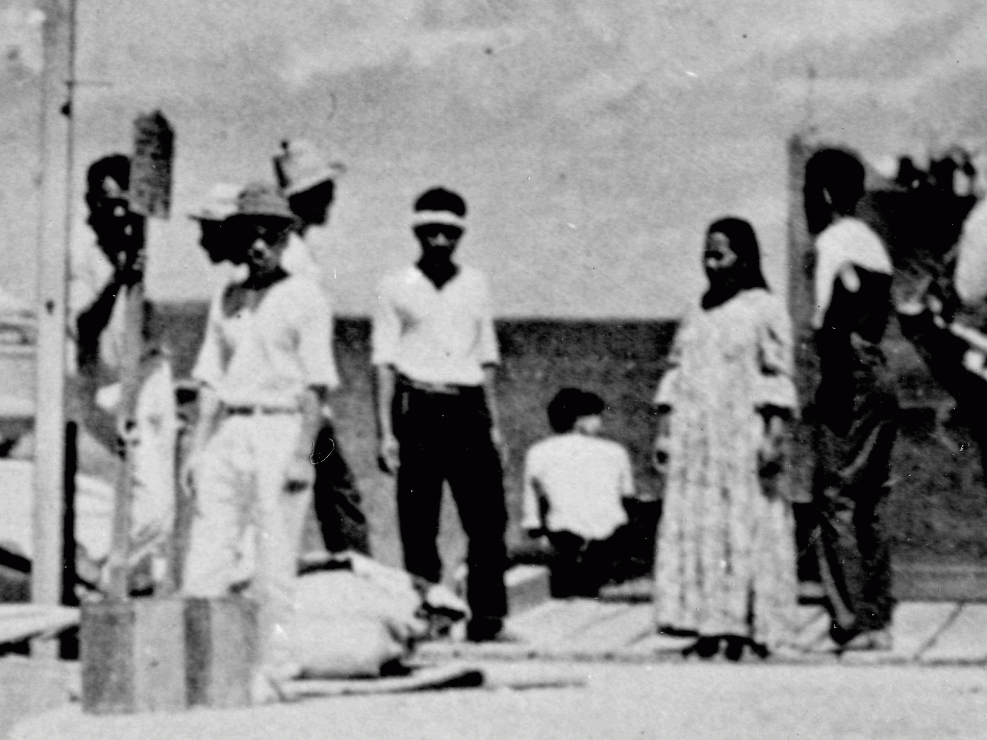 A closer look at a recently unearthed photo shows a short-haired figure who could be aviator Amelia Earhart.

It has been 80 years since Amelia Earhart vanished while trying to become the first female pilot to fly around the world, and her 1937 disappearance has become one of the great mysteries of our time.

Now the makers of a new investigative special from the History Channel believe they have “the smoking gun” that answers the question of Earhart’s disappearance aboard her Lockheed Electra once and for all: an old, cracked photograph found in the National Archives, showing a group of people on a dock in the Marshall Islands. Among the figures: two people who just might be Earhart and her navigator, Fred Noonan.

The show’s experts say the short-haired person at the back is Earhart, and the man on the left with the receding hairline is Noonan. But the photo was taken from a distance, the man’s face is in shadow and the person purported to be Earhart is turned away from the camera.

A former U.S. Treasury agent named Les Kinney found the photo in a box of papers from the Office of Naval Intelligence while scouring for evidence regarding Earhart’s disappearance that might have been overlooked. The undated photo was in a box marked “declassified.” Its caption reads “PL-Marshall Islands, Jaluit Atoll, Jaluit Island. Jaluit Harbor. ONI #14381.” 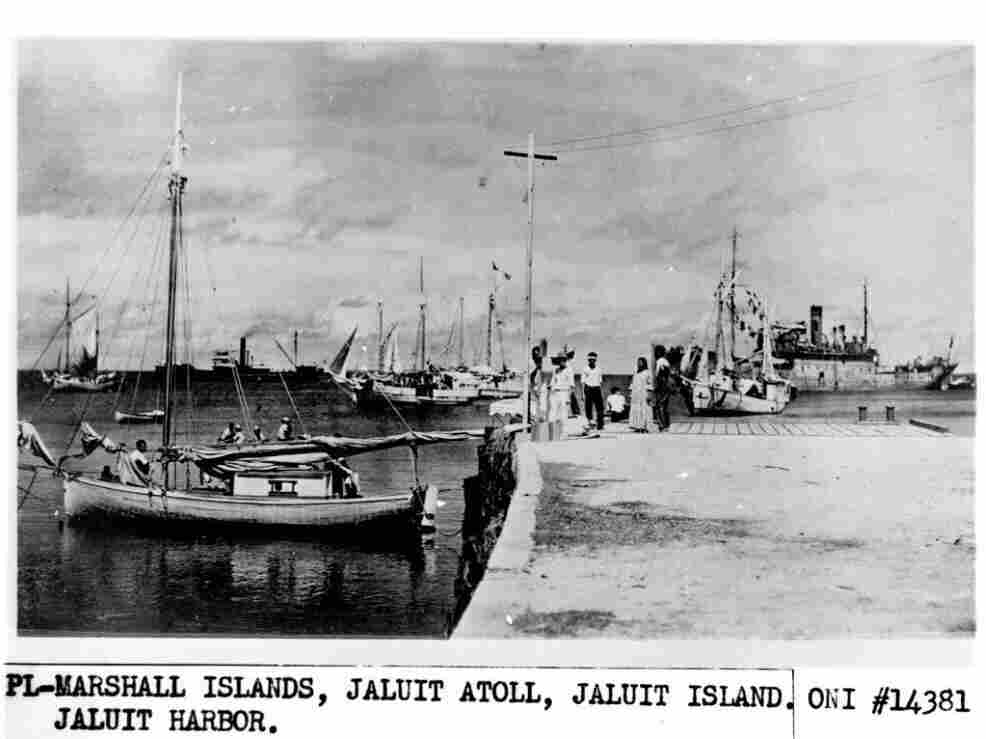 “Kinney argues the photo must have been taken before 1943, as U.S. air forces conducted more than 30 bombing runs on Jaluit in 1943-44,” according to a post on History.com. “He believes the plane on the barge is the Electra, and that two of the people on the dock are Earhart and Noonan. … Kent Gibson, another forensic analyst who specializes in facial recognition, said it was ‘very likely’ the individuals in it are Earhart and Noonan. Both analysts identified the ship in the photo as the Japanese military vessel Koshu Maru, which is thought to be the ship that took Earhart and Noonan away after their crash landing.”

The experts interviewed for the special believe this photo lends powerful credence to the theory that when Earhart couldn’t find Howland Island — her next refueling station — she turned back westward and landed on Mili Atoll. They think Earhart and Noonan were then rescued and taken to Jaluit Island, where there was a deepwater port.

An Earhart researcher named Richard Spink has taken many trips to the Marshall Islands and believes he has found parts of what was Earhart’s plane on Mili Atoll. If indeed it’s Earhart and Noonan in the photo, then they must have crash-landed in the Marshall Islands — and lived.

Earhart and Noonan may then have been taken to a Japanese prison on the island of Saipan, according to the special. But if Earhart and Noonan are bound for prison, why do they look so serene in the photograph?

“They obviously believe that they’ve been rescued,” Gary Tarpinian, the show’s executive producer, tells NPR. “However, the word came back from Tokyo that … we can’t let her go. I’m not sure why. Did she see something she shouldn’t have seen? Did they think she was spying? Who knows? We can only speculate. But somewhere between when she thought she was rescued and after that photo, she was held captive and she was brought to Saipan.” 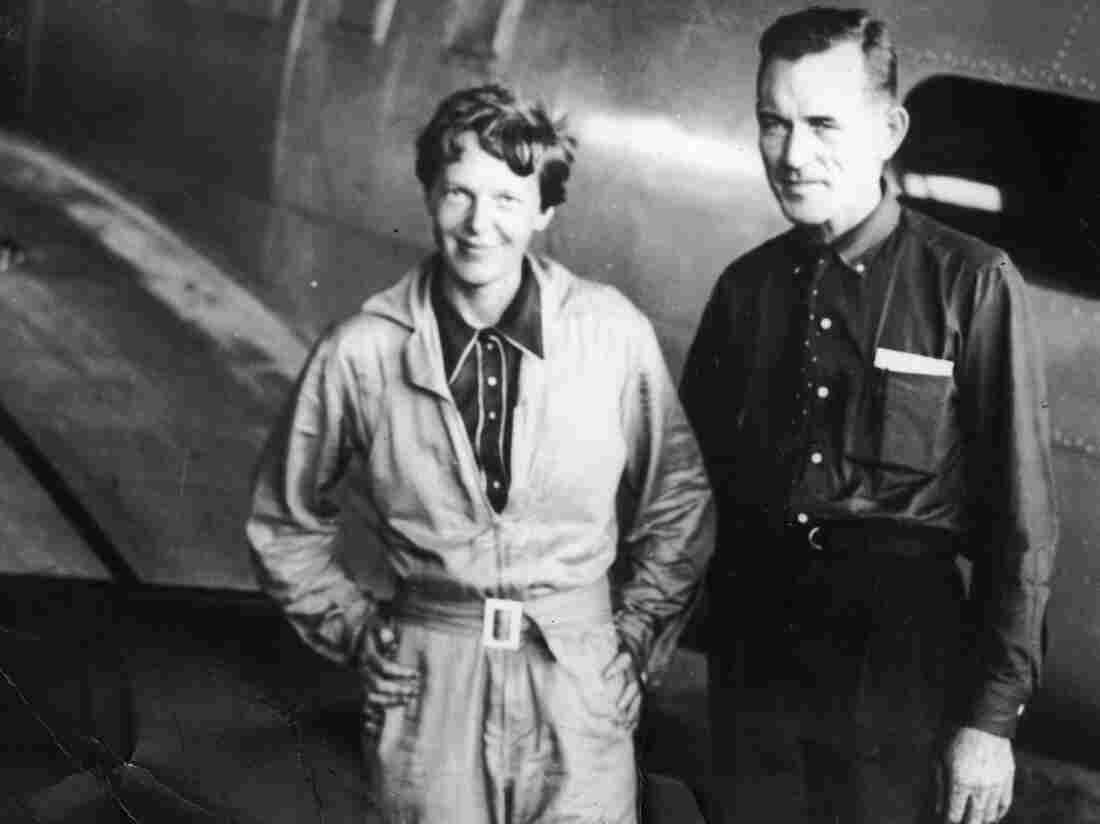 Earhart with Noonan in Natal, Brazil, in June 1937.

The photo is proof, he says, of what many people on the Marshall Islands have long held: Earhart and Noonan landed there and a Japanese boat called Koshu took them to Saipan. The special interviewed people from Saipan, including a woman Tarpinian says might be the last person alive who saw Earhart with her own eyes.

“She was a 12-year-old girl who never forgot what she saw, because she had never seen Caucasian people — she’d never seen Westerners,” he says. “And she remarked to her mother, ‘Do all the women in the West dress like men, with short hair and pants?’ “

But Richard Gillespie, an Earhart expert who leads The International Group for Historic Aircraft Recovery, isn’t at all convinced the photograph depicts the aviator.

“This is just a picture of a wharf at Jaluit, with a bunch of people,” he told The Guardian. “It’s just silly.”

Gillespie believes that Earhart died as a castaway on an island in what’s now Kiribati, according to the newspaper. “We found the site, we’ve done three excavations there and we’re finding artifacts that speak of an American woman of the 1930s,” he said.

He says the person in the Jaluit photo has hair too long to be Earhart, who he says was photographed just days before, “and hair doesn’t grow that fast.”

National Archives communications director James Pritchett says the archives doesn’t know when the photo was taken, who the photographer was, or what the “PL” in the caption means.

The archives posted the Jaluit photo to its website Thursday but isn’t going to make a statement on whether the people in the photo are Earhart and Noonan, Pritchett says,

But even he is intrigued by the idea that it could be.

“I’m so fascinated by this myself,” he says. “There are many discoveries that happen all the time. It’s usually some really swift members of the public. … People here find things on a really regular basis. We have billions of records of all kinds.”

Hear that, America? Get thee to the archives and solve some mysteries.