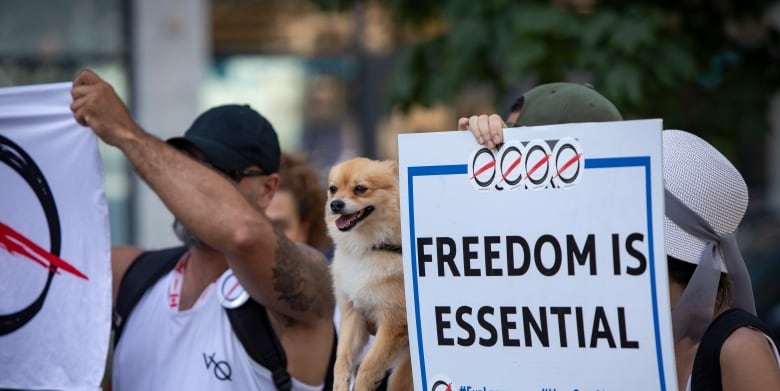 As an immunocompromised person with a greatly reduced lung capacity, Dave Watson doesn’t mince words when it comes to anti-maskers in Toronto who are sidestepping face-covering rules that are meant to keep people safe amid the COVID-19 pandemic.

A week after anti-mask groups rode public transit without face coverings to protest new city bylaws requiring them, the same groups are now making “exemption cards” that claim they are medically exempt from wearing face coverings.

“It’s a load of crap,” said Watson, who has cystic fibrosis, a genetic condition that causes severe respiratory disease and increases a person’s susceptibility to lung infections.

“If anyone couldn’t wear one, it would be me.”

CBC Toronto is not naming the groups, nor the people involved with them, so as to not publicize false information.

The Canadian Red Cross says the cards contain a version of the organization’s emblem that is being used without permission.

“This is a misuse of the red cross emblem and we are pursuing actions to have it removed,” a spokesperson said in a statement.

“No organization — except the Canadian Red Cross and the medical services of the armed forces has the right to use the red cross emblem in Canada.”

Posts about the cards can be found on many social media platforms. In one such video, a man smiles and laughs while holding the card and saying, “Mandatory mask? Not with this.”

The account that shared the video is run by a man and woman who are leading one of Toronto’s anti-mask groups. It has also shared a host of debunked material and conspiracy theories in recent days.

As the CBC’s Lorenda Reddekopp explains, anti-mask groups in Toronto are now making their own cards to avoid wearing face coverings in public places. 1:51

In another video shared by the same account, a man visits Toronto Western Hospital, where he is told by an employee he has to wear a mask to seek care. He responds that he has a medical condition, and shows the card. Later, he smiles at the camera and says, “The card definitely helped.”

Dr. Erin O’Connor, deputy medical director of the emergency department at the University Health Network (UHN), confirmed to CBC News that health professionals are seeing people show up at emergency rooms with cards like these.

“The thing we’re seeing is people are coming in with conditions that are fairly minor, they’re not emergencies, and then also refusing to wear masks to protect the other patients in the waiting room and in the hospital,” she said.

UHN, which oversees both Toronto Western and Toronto General, runs a major cancer centre and a major transplant centre.

“Our patients are very, very vulnerable. I simply don’t understand how in good conscience someone would not want to protect another vulnerable member of society,” O’Connor said.

In a statement, Dr. Vinita Dubey, associate medical officer of health for Toronto, said the city is “aware of this issue.”

“Proof of exemption is not required for individuals due to medical reasons as this is personal health information, and it is important to protect people’s privacy,” she said.

Exemptions to the bylaw are available for young children or people with health problems, but O’Connor noted that the number of medical conditions that actually preclude someone from wearing a mask is “very, very, very small.”

Watson says that depending on the day, he is typically running at between 34 and 42 per cent lung capacity. Breathing can be tough, especially in high heat and humidity.

Still, he hasn’t thought twice about wearing a mask in public.

“It makes sense to wear a mask, and for people to make these cards, it’s pretty insulting,” he said.

“I’ve done my part. The least you can do is do yours.”

A recent World Health Organization study has confirmed that face masks are effective in reducing the spread of the virus.

Provincial health officials and Premier Doug Ford have all been advocating that Ontarians who are able to wear a mask or face covering do so while in situations where physical distancing is not possible.