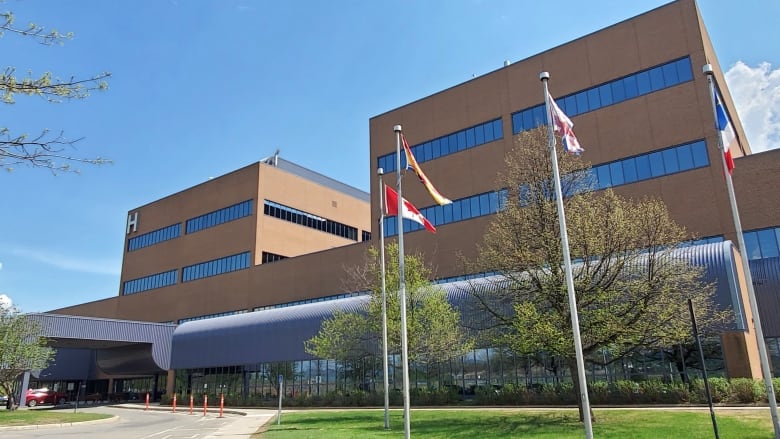 The doctor at the centre of a COVID-19 outbreak in the Campbellton, N.B., area says he’s not sure whether he picked up the coronavirus during a trip to Quebec or from a patient in his office.

Dr. Jean Robert Ngola made the comments to Radio-Canada’s program La Matinale on Tuesday morning — his first media interview since the emergence of 13 new cases in the northern New Brunswick health region starting May 21. Before then, it had been two weeks since the province had an active case.

Ngola has been suspended by the Vitalité Health Network, one of the province’s two regional health authorities, and the province has asked the RCMP to investigate to determine whether charges are warranted.

He said he decided to speak out because he’s become the target of racist verbal attacks daily and false reports to police, and he feels abandoned by public health officials.

Ngola, who is also known as Dr. Ngola Monzinga, has been working as a doctor in Campbellton since 2013. He previously practised in Europe and in the Democratic Republic of Congo.

He said he did not self-isolate after returning from an overnight return trip to Quebec to pick up his four-year-old daughter. Her mother had to travel to Africa for her father’s funeral.

“What was I supposed to do?” he said in French. “Leave her there alone?”

Ngola said he drove straight there and back with no stops and had no contact with anyone. He said none of his family members had any COVID-19 symptoms at the time.

He returned to work at the Campbellton Regional Hospital the next day.

“Maybe it was an error in judgment,” said Ngola, pointing out that workers, including nurses who live in Quebec, cross the border each day with no 14-day isolation period required.

“Who hasn’t made an error in judgment?” he said. “That’s why I have compassion towards everyone.”

What he told border officials unclear

On May 27, Premier Blaine Higgs announced a COVID-positive “medical professional” in their 50s had travelled to Quebec for personal reasons, was “not forthcoming” about the reasons for their trip upon returning to New Brunswick and “did not self-isolate as a result.”

The medical professional then returned to work at the Campbellton Regional Hospital for two weeks, Higgs had told reporters, describing it as “irresponsible.”

“If you ignore the rules, you put your family, your friends and your fellow New Brunswickers at risk,” Higgs said at the time.

Twelve of the province’s 13 cases have been linked to the travel-related case to date, according to Public Health officials.

The policy for any health-care workers who travel outside the province for any reason is to self-isolate for 14 days, New Brunswick’s Chief Medical Officer of Health Dr. Jennifer Russell has said. “It is mandatory.”

Ngola did not say during the morning interview what he told officials at the New Brunswick border about his reason for travel, or what they told him about requirements to self-isolate upon entering the province.

Nor did he indicate what, if any, followup he had from border officials.

When reached by phone later to clarify, Ngola said he was on the other line with his lawyer and hung up. Repeated subsequent calls went straight to voicemail, which was full before the end of the day.

The Department of Health declined to respond to Ngola’s comments or offer any additional information, citing privacy and the ongoing investigation.

‘How many people are unwitting carriers?’

Ngola said he received a call from a public health official on May 25 informing him one of his patients had tested positive for the coronavirus that causes the respiratory disease COVID-19.

Ngola had seen the man May 19 for a prescription renewal or something that did not require any touching or a physical exam. He said the man had no COVID-19 symptoms and was wearing a mask.

Dr. Jean-Robert Ngola says he isn’t sure how he got the coronavirus and has never shown symptoms. 1:22

Ngola said he immediately called the patient, who had cold-like symptoms and was doing OK.

He said he cancelled his shift that night at the hospital and got a test for himself and his daughter. Neither of them were showing symptoms, but they both tested positive.

Ngola said he still doesn’t know how they were infected.

“Who can say? … The virus is circulating everywhere. … How many people are unwitting carriers?”

He said one hour after he spoke with hospital and public health officials about his contacts to facilitate the investigation and protect the public, his name, face and address were being advertised all over the internet as “the bad doctor who brought the virus to kill people.”

Ngola said that’s not who he is.

“I only have compassion towards sick patients … the role of doctors is to care, to heal, to help … not to spread viruses.”

There are 13 active in cases in the province — all in the Campbellton health region, known as Zone 5, including a new confirmed case announced on Tuesday.

The person in their 80s is a resident at the Manoir de la Vallée, the long-term care facility in Atholville where four other residents in the Alzheimer’s unit and a staff member have also tested positive.

The staff member, a female personal attendant, had social contact with Ngola on May 20, according to the facility’s owner, Dr. Guy Tremblay.

Five people are now in hospital, one of whom is in intensive care.

Public Health officials have said more cases are expected to emerge in the coming days. The incubation period for the coronavirus is roughly up to 14 days.

About 300 people identified as close contacts are self-isolating and monitoring for symptoms.

Ngola said he’s been looking into the people making hateful posts, and most are from outside the region. He said he feels they are trying to incite violence against him because he is black.

He said he’s been getting accusatory calls from people in the United States, Africa and Europe, and people are also making false reports about him to local police.

Ngola said he is not pleased with the way he’s being treated by public officials.

“I’m a patient. I have a right to confidentiality, to protection from the system.”

Gilles Lanteigne, the chief executive officer of the Vitalité Health Network, said he was aware of Ngola’s public statements, but could not comment on human resources matters, citing privacy.

“We understand that the situation is difficult for all parties involved and we sympathize with the people who are affected by this affair, either directly or indirectly,” he said in an emailed statement.

“I would like to appeal to everyone to remain calm in these difficult times.  It is more important than ever to show respect, tolerance and compassion for one another. This is how we will get through this crisis and come out of it stronger.”

The New Brunswick Medical Society is “deeply concerned” to learn Ngola has been the victim of racism, said president Dr. Chris Goodyear.

“This is disheartening and disgraceful. Racism cannot and should not be tolerated,” he said in a statement.

Although it’s understandable citizens are concerned and upset about the COVID-19 outbreak, there is “no excuse for the dissemination of [Ngola’s] personal information or the racist verbal attacks and false reports to police that he has endured.”

Nearly 3,000 people were tested last Friday through Sunday — more than 10 per cent of the population.

A total of 30,666 tests have been completed provincewide since the pandemic began in March.

The Campbellton region has been pushed back into a stricter phase of pandemic recovery, known as the orange phase.

Area residents are being told to stay home as much as possible, to avoid any close contact outside their two-household bubbles, and not travel outside the region.

Personal services, such as hair dressers and spas, and non-regulated health professionals, such as acupuncturists and naturopaths, which had just reopened under the yellow phase, cannot operate until further notice.

All surgeries and non-urgent health-care services have been put on hold, no admissions are being accepted and visitors are prohibited except for patients nearing end of life, those in pediatrics, intensive care and obstetrics, where only one designated visitor is allowed per patient.

Meanwhile additional loosening of restrictions for the rest of the province under the yellow phase have been delayed until June 5.

These include allowing outdoor public gatherings of up to 50 people, instead of 10, with physical distancing, and religious services, weddings and funerals with of up to 50 people. The reopening of gyms and start of low-contact sports have also been postponed.

The legislature has also adjourned until June 9 to ensure the politicians don’t contribute to the spread of the virus and to allow the all-party COVID cabinet committee to continue to respond to the outbreak.

Ngola said he remains devoted to serving the community.

“I have a family. I have a right to live. Please, I’m not a criminal.”