Distillers scrambled to make hand sanitizer for free. Then the federal government moved on 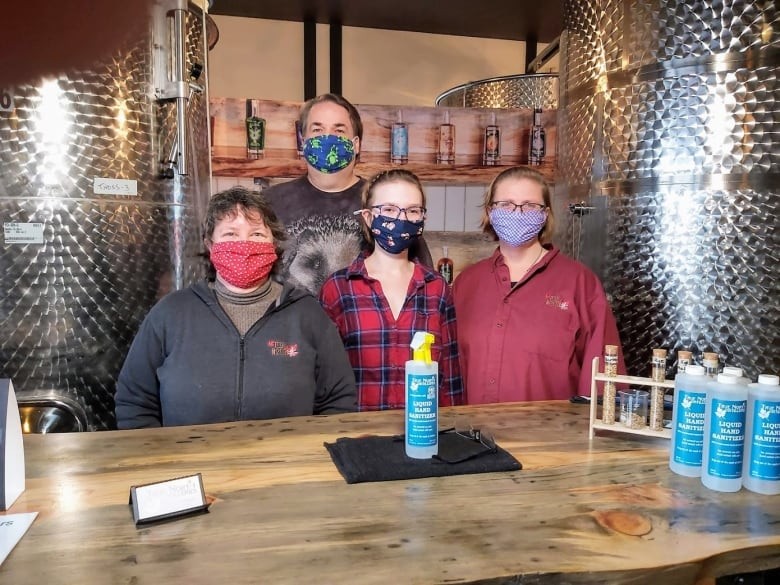 Canadian alcohol distillers who pivoted early to produce hand sanitizer to keep Canadians safe from COVID-19 are crying foul as their hopes of solving longer-term supply chain issues appear to have evaporated.

When the prime minister called on Canadian industry to retool to produce protective equipment in the early panic of the pandemic, dozens of distillers switched from making spirits to hand sanitizer.

At the time, it was scarce on store shelves.

So dozens of Canada’s distillers scrambled to produce tens of thousands of litres for free. At the height of the shortage, about a dozen distilleries in B.C. alone were supplying hospitals, government offices and emergency workers all over the province.

As the months wore on, some distilleries began to charge to cover the cost of making the sanitizer, but many continued to donate thousands of litres to people and organizations in need, being careful not to profiteer in a time of crisis.

CBC News has learned that, during that time period, the federal government spent hundreds of millions of tax dollars procuring sanitizer from outside Canada.

In total, more than $570 million worth of hand sanitizer has flowed into Canada from outside countries since March, according to Statistics Canada data.

Of that amount, Canada paid directly for at least $375 million’s worth. BYD Canada Co., a China-based car maker with a few employees and offices in Canada, was paid $252 million for sanitizer manufactured in its retooled Chinese factories.

Read the other stories in this series:

Public Services and Procurement Canada told CBC in an email that of the 20.6 million litres of hand sanitizer bought, 52 per cent came from Canadian suppliers.

BYD was paid for 10 million litres of bottled medical-grade sanitizer, but there are no future plans to buy from the company.

Canada was faced with an “intense level of global competition” for medical supplies and moved to buy bulk one-time orders from international suppliers during the worldwide shortage, PSPC wrote.

That millions of tax dollars were paid out confounds distillers who were producing sanitizer for free. Many assumed that expedited changes to tax requirements and regulations to allow sanitizer production held promise that the government would continue to encourage at-home manufacturing. They requested compensation for supplies and in some cases consideration for longer-term contracts.

But none of that materialized for the smaller players.

The government of B.C. did buy about 7,000 litres of sanitizer, about a million dollars worth, from Parallel 49 Brewing Co. in Vancouver. But soon after, the province began shipping in sanitizer through a federal supply source, according to provincial officials.

Meanwhile, distillers like Tyler Dyck spent nine months making and donating the disinfectant. He’s the president of the Craft Distillers Guild of B.C. and helps run his family distillery in Vernon and Kelowna.

“It really is like a sucker punch in the gut,” said Dyck, CEO of Okanagan Spirits Craft Distillery.

WATCH | Distillers talk about being shut out of federal pandemic contracts: 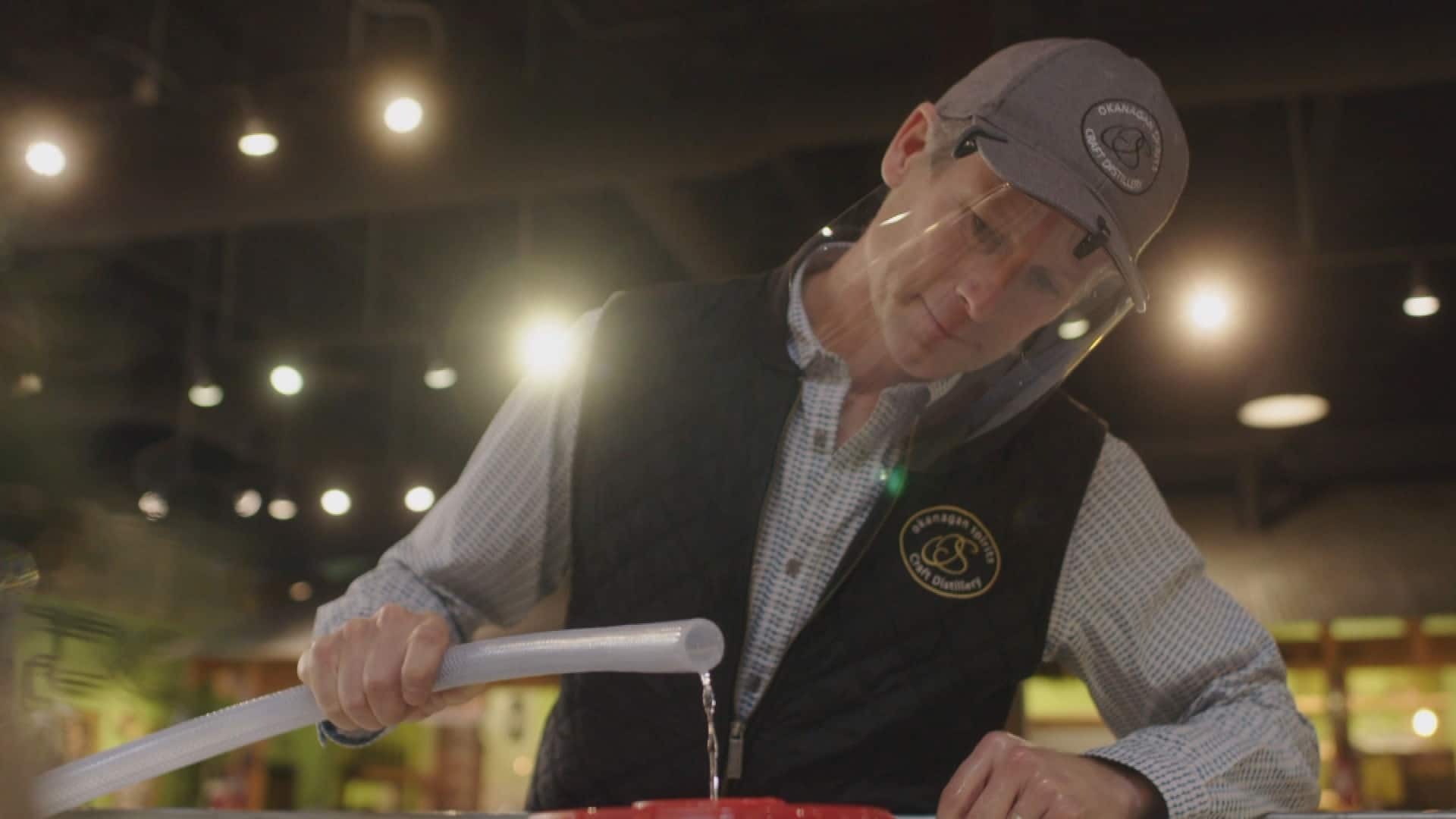 B.C. distiller Tyler Dyck and others in the industry answered the government’s call to Canadian businesses to step up and help early in the pandemic and retooled their production lines from spirits to sanitizer. They were never compensated for the effort even as the government paid foreign suppliers to meet the demand distillers say they could have handled domestically. 2:26

By summer, Canada had agreements with larger companies to deliver 20 million litres of sanitizer. While that solved the immediate shortage, distillers say it ignored their bids for contracts or at least compensation.

“You are bypassing people that have done the right thing from Day 1,” said Dyck.

Dyck said he has been called naive, but felt it was his family’s duty to produce the COVID protection when nobody else could. His company spent about $200,000 donating sanitizer.

“For our family … it’s the thing that made us feel more proud than anything,” he said.

Other distillers began to charge for sanitizer after weeks turned into months, to offset supply costs for things like bottles and chemicals needed.

In Toronto, the Spirit of York Distillery was the first to distribute sanitizer. The owner says he got numerous calls from brokers looking to resell his raw alcohol and turn a profit.

“We couldn’t get a contract with the [federal] government no matter how hard we tried. It’s actually very disappointing,” said Gerry Guitor.

While some complained that distillery-made sanitizer can smell of booze, makers say it worked and created jobs.

“We scrambled and we scrambled a lot. We worked hard to catch up so people weren’t all living bottle to bottle,” said Stewart.

His bid to get a contract to keep supplying — or compensation for the $103,000 he’s spent — has been ignored.

“I am frustrated. We stepped up. The federal government eventually bought from offshore, and [sanitizer] started showing up in tankers in Vancouver harbour, but we kept donating,” said Stewart.

His MP, Richard Cannings of South Okanagan-West Kootenay, lobbied Ottawa for distillers in his riding.

“In normal times, of course, companies wouldn’t produce material without a contract. But we were in very different times. There was a lot of fear and unknown. [Distillers] thought they were going to do the right thing and help the country,” said Cannings, an NDP member.

CBC asked federal ministries about compensation for the distillers. A spokesperson for the Minister of Innovation Science and Industry Navdeep Bains said Ottawa is grateful to the roughly 1,000 companies that pivoted to produce COVID protections such as masks and sanitizer.

“With personal protective equipment, we started with virtually no Canadian production, no self-sufficiency and a precarious international marketplace,” the email said. “We are immensely proud of how Canadian industry has stepped up to the plate.”