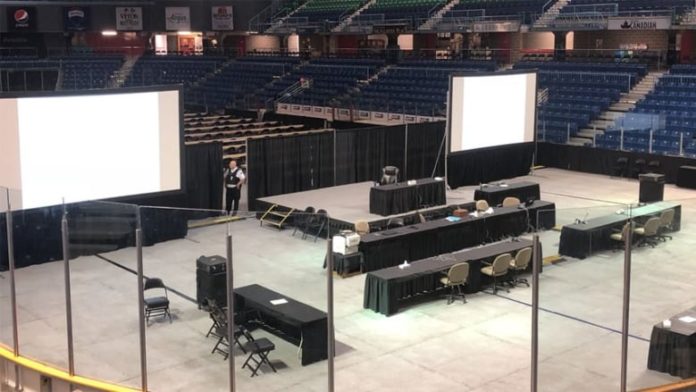 One of the most sensational murder cases in New Brunswick history is back before the courts in Saint John on Monday as jury selection begins in the retrial of Dennis Oland in the 2011 bludgeoning death of his father, multimillionaire Richard Oland.

Oland was convicted in December 2015 of second-degree murder, but the New Brunswick Court of Appeal overturned the decision in October 2016, citing an error in the trial judge’s instructions to the jury.

Prospective jurors were summonsed to appear at Harbour Station, the city’s largest arena, at 9 a.m. AT, but the formal proceedings likely won’t begin until the afternoon.

Prospective jurors will be assigned a group letter and a tentative return date and a time for the actual selection process, which will be held at the Saint John Law Courts building. The return date is subject to change, so they will also be given a number to call to confirm the date and time for their group.

Oland, 50, is present, sporting a navy blazer and grey pants, and accompanied by his wife, Lisa Oland, and mother, Connie Oland.

As of 10:30 a.m., a long line of people was still stretching the length of the arena and well out the door as they waited to get through security and to register.

“Please be aware you may be here until late in the day — please make necessary arrangements before noon,” a handout advises. That could include calling employers or child-care providers, or having prescription medications delivered, an official explains.

They’re allowed to use their electronic devices in silent mode while they wait, but cannot take any photos or videos. Once Court of Queen’s Bench Justice Terrence Morrison enters, court will be in session and they won’t be able to use electronic devices or leave until instructed to do so by the judge.

“While every effort is being made to expedite the process, the ending time is uncertain,” the handout says.

Potential jurors may obtain, snacks, a light lunch and,” if necessary, dinner” — all at no cost. 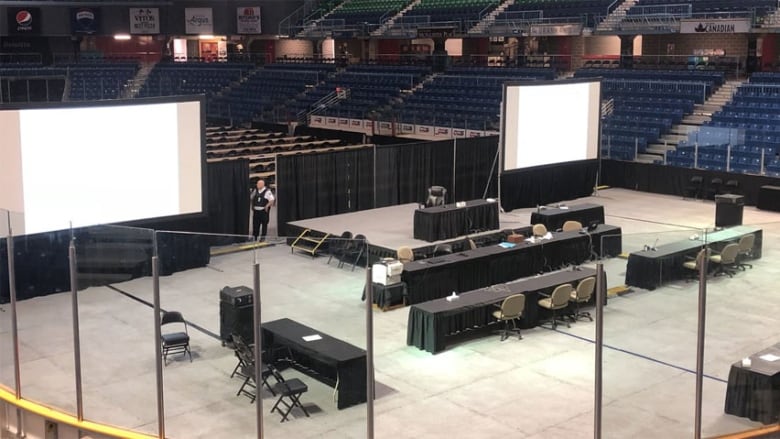 Saint John’s Harbour Station has been turned into a makeshift courtroom for jury selection for Oland’s murder retrial. (Bobbi-Jean MacKinnon/CBC)

The arena served as a makeshift courtroom for jury selection in 2015 as well because the Saint John Law Courts building wasn’t big enough to accommodate the large number of prospective jurors.

There is a publication ban on how many people have been summonsed to attend Monday for possible jury duty, but 5,000 were served a summons for Oland’s first trial — nearly 17 times the usual number in New Brunswick.

It was one of the largest jury pools in the province and larger than some of the most high-profile cases across Canada that have generated international headlines, including Robert Pickton, Luka Magnotta and Paul Bernardo.

Justice officials wanted to ensure they had a large enough jury pool from which to select 12 jurors, two alternates and two additional jurors without bias.

They were concerned about the amount of pretrial publicity and possible conflicts of interest, given the city’s small population of about 68,000 and the Oland family’s prominence as founders of ​Moosehead Breweries Ltd., the oldest independently owned brewery in Canada.

Anyone who received a summons must appear before the judge today, unless they were previously excused by the head sheriff. Otherwise, they could be found in contempt of court and fined up to $1,000.

The retrial is scheduled to last 65 days and employers in New Brunswick are not required to pay employees’ wages while they serve on a jury.

Oland, a financial adviser, is accused of killing his 69-year-old father, whose body was discovered in his Saint John office on July 7, 2011.

He has been living in the community under conditions since October 2016, when the Court of Appeal ordered a new trial and released him on bail.

Oland maintains he is innocent and his extended family has stood by him from the beginning.