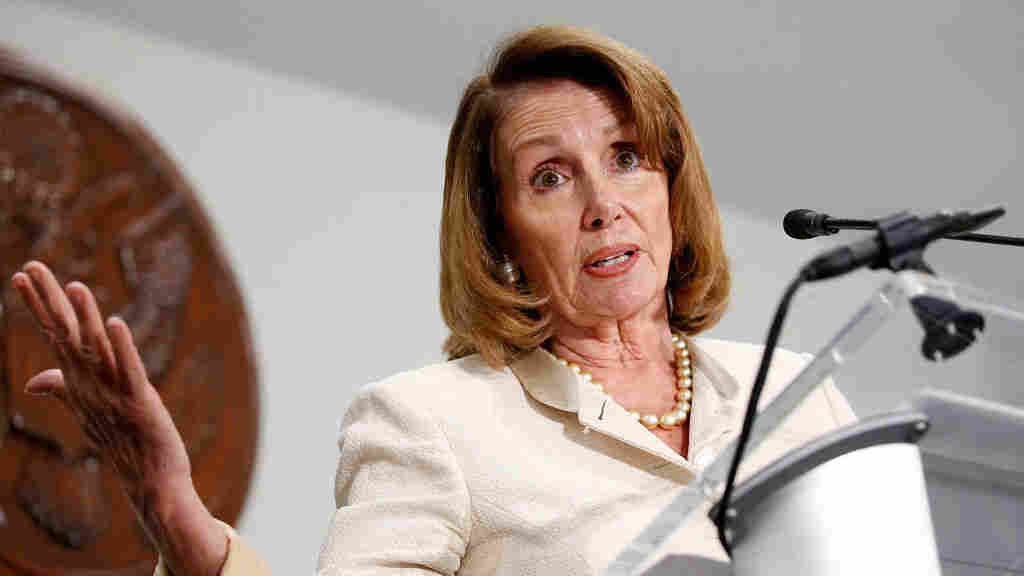 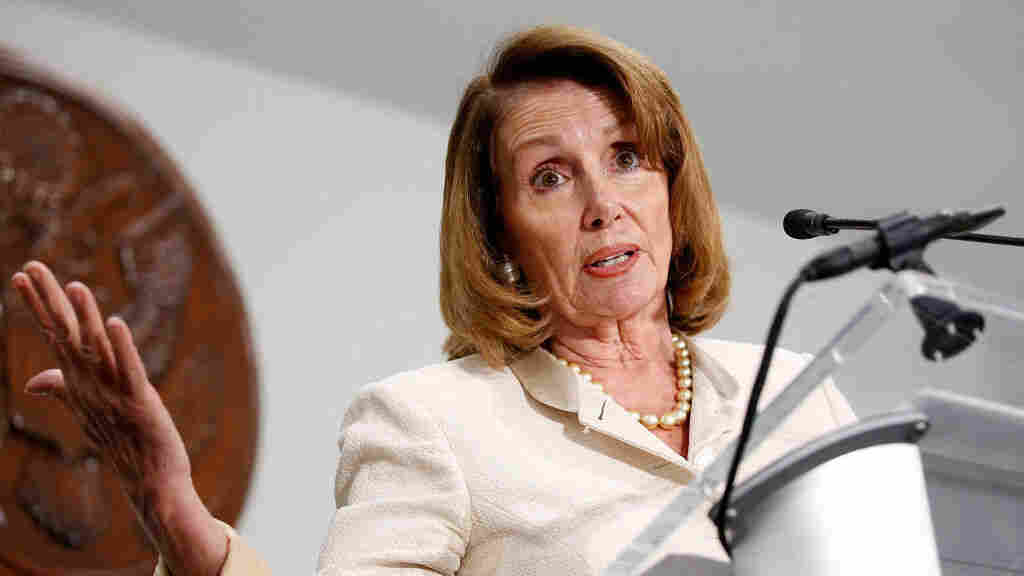 House Democratic Leader Nancy Pelosi faced her most serious challenge to her leadership post last year from Rep. Tim Ryan, D-Ohio, but she still emerged with support from two-thirds of the caucus.

Democratic finger-pointing has begun after the party’s loss in Tuesday’s closely watched special election in Georgia, and for some members, the blame partly belongs to their House minority leader, Nancy Pelosi.

The California Democrat has long been a boogeywoman Republicans have used to motivate their base and to woo independents as the personification of liberal values and a reminder of why even if they may like their individual member or candidate, a vote for that Democrat would be a step toward putting Pelosi back in the speaker’s chair.

In Atlanta, ads from the Congressional Leadership Fund that tied Democrat Jon Ossoff to Pelosi blanketed the airwaves. And after Republican Karen Handel pulled out the win, the leadership-backed superPAC said using the Democratic leader prominently was one of its most effective tactics.

“When asked, over 60 percent of voters preferred a congressman who would work with Paul Ryan, while only 28 percent chose Nancy Pelosi,” CLF Executive Director Corry Bliss wrote in a memo on Wednesday morning. “This became a focal point in our messaging, as well as other outside groups and the Handel campaign itself. CLF never deviated from the goal of defining Ossoff as a dishonest liberal.”

Pelosi isn’t in danger of losing the leadership perch she has long held, though she did fend off her toughest challenge ever last fall from Rep. Tim Ryan, D-Ohio, who argued the party needed someone who better understood the rural, working-class voters that were critical to President Trump’s victory over Hillary Clinton. Ultimately, Pelosi still got support from about two-thirds of the caucus, though the 63 votes Ryan garnered were the most serious defection Pelosi has ever faced.

Ryan told NPR on Wednesday that the ads that Republican groups ran harnessing Pelosi’s unpopularity with their GOP base voters were clearly effective. And running simply on an anti-Trump message — like Clinton tried and failed last year — wouldn’t work for Democrats in 2018 either, no matter how mired in scandal and controversy over Russia the White House may be. Instead, Ryan argued voters want to know how Democrats will address economic concerns and grow jobs, and so far the party doesn’t have a coherent message on that.

“You know you can sit here and we’ll talk about Russia all day long today on Capitol Hill and in Washington. You go back to Ohio, they’re not talking about Russia. They’re not. They’re not talking about Putin, Russia, Flynn. … I just feel like we’re so disconnected from what real people are thinking about. We’re overwhelmed with our anger towards Trump. And I’m mad at Trump, but I’m madder at the Democrats for letting him get in. And we better focus,” Ryan said.

“It’s OK to be mad,” Ryan added, but he argued that Democrats have to find a way to channel that into policy ideas. “If you stay mad, you stay angry, you’re unproductive. And I think you know the energy is good, but we better start moving towards a focus on an agenda that’s going to help working-class people.”

Rep. Seth Moulton, D-Mass., who supported Ryan in the leadership elections, also said it was time for a change at the top, and that this loss — where Democrats poured in tens of millions of dollars only to do worse than Clinton did in the district — “better be a wake-up call.”

“Look, I think the Democratic Party has to come to terms with the fact that what we’re doing isn’t working,” Moulton said. “It’s time for some change. I think it’s time for a new generation of leadership.”

Moulton, a 38-year-old Iraq War veteran, was elected to Congress in 2014. He argued that when strategy doesn’t work, there have to be repercussions at the top.

“Certainly, one thing I learned as a Marine is my job description was very simple: You’re responsible for everything your platoon does or fails to do,” Moulton said. “I think our leadership owes us an explanation for what’s gone on in these four elections, but also a plan for moving forward. That’s the most important part.”

Other members were even more blunt in their assessment of the Georgia defeat and Pelosi’s culpability.

“I think you’d have to be an idiot to think we could win the House with Pelosi at the top,” Rep. Filemon Vela, D-Texas, told Politico. “Nancy Pelosi is not the only reason that Ossoff lost. But she certainly is one of the reasons.”

For GOP consultants, tie-every-Democrat-to-Pelosi is a tried-and-true strategy that’s been working for more than six years. Veteran GOP ad-maker Brad Todd says that’s because the San Francisco congresswoman is the personification of the liberal values they can’t stomach.

“There are plenty of people who have qualms with Trump on one level or another, but are totally willing to stick with him because the Democratic option is just too far left,” Todd said. “Pelosi is the human embodiment of that. She fits the stereotype of exactly what swing voters can’t stand about the Democratic Party.”

In the Ossoff race, even though the 30-year-old documentary filmmaker and former congressional staffer ended up running a more centrist and not Trump-centric campaign, Republicans were able to zero in on the more than $23 million in donations Ossoff raised, largely from liberal enclaves like California and New York, and make an easy connection to Pelosi. One of their ads even features the Bay Area and branded the two Democrats together, putting his photo alongside hers on the Golden Gate Bridge.

Pelosi allies have pushed back at the blame game and pointed to the improvement Democrats had in other special elections in Kansas, Montana and South Carolina as evidence that their efforts to harness the resistance against Trump was working. And they point out that even if Georgia’s 6th District, which the president only narrowly carried, wasn’t Trump Country, it was still a reliably red area that was going to be hard to overcome.

“In the previous election — the Republican candidate won by more than 20 points. To come within a hair’s breath of winning that seat is nothing short of extraordinary,” said House Democratic Caucus Vice Chairwoman Linda Sánchez, D-Calif.

“In the districts where we are truly competitive, I don’t think that [anti-Pelosi] message is going to hold very much,” said Rep. Karen Bass, D-Calif.

A top aide to Pelosi dismissed the blaming, saying that Pelosi still enjoys broad support among the conference and that any party leader would be subject to partisan attacks. And she remains the party’s most prodigious fundraiser, bringing in $567.9 million for the party since she joined leadership in 2002. Last cycle alone, she raised $141.5 million.

In a letter to her colleagues on Wednesday about the special elections, Pelosi maintained an upbeat tone.

“Every effort was made to win last night. But we don’t agonize, we organize — organize inside the House and mobilize outside for the good of the American people,” she wrote.

But with Republicans re-energized after the Georgia win, they’re praying she doesn’t go anywhere anytime soon. After she was re-elected Democratic leader, the Republican National Committee unfurled a banner that read “Hire Pelosi” outside its headquarters.

“It works only 100 percent of the time,” said Todd, the GOP ad-maker. “Pelosi is the gift that keeps on giving.”