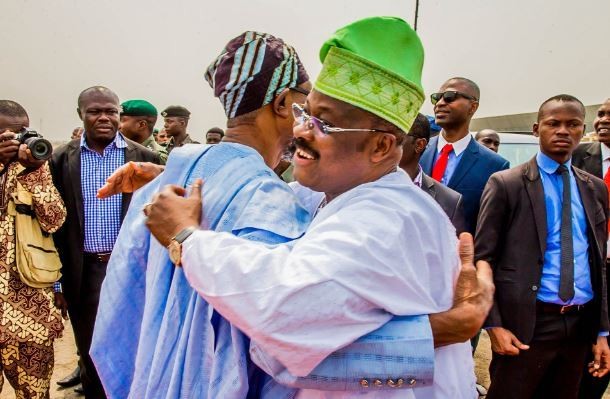 As Nigeria marks its 18th Democracy Day anniversary, the All Progressives Congress in Oyo State has applauded Senator Abiola Ajimobi over what the party described as the governor’s renewed commitment to good governance, excellent service delivery and repositioning of the state despite challenges.

Commemorating the anniversary, Oyo APC in a statement issued by its Director of Publicity and Strategy, Olawale Sadare, said the two years so far spent under the government of President Muhammadu Buhari, since 1999 when Nigeria was returned to democracy, had been the only defining moment of hope and national rebirth.

He added that prayers and a better sense of patriotism were required from the citizens.

“In Oyo State, it has been six years of good governance-induced restoration, transformation and repositioning courtesy the APC government of Abiola Ajimobi. Fresh in our memory was the first term of sterling performances which facilitated his unprecedented re-election for the second term as governor of the state.

“Between 2011 and 2014, the state witnessed restoration of peace and security, massive facelift of social infrastructure as well as improved welfare package for workers. However, the nation’s overall economy which took a downward turn under the PDP’s Jonathan administration took its toll on Oyo State but Ajimobi weathered the storm by bringing to bear his wealth of experience, doggedness and patriotic zeal.

“Feelers from events commemorating Ajimobi’s second year of his second term in office are reassuring and worthy of celebration. With projects such as the unveiling of Oyo State Model School Interventions (OYOMESI), construction of six (mega) Model Secondary Schools across the Georgia-political zones, construction of massive road projects in Ibadan and other big cities, flag-off of Oyo State Health Insurance Scheme, inauguration of Housing and other infrastructural scheme projects as well as facilitation of multi-billion dollars foreign investment into the state among other things, the better days are here in Oyo state.

“No doubt, the governor is poised to leave a legacy of service, performance and good governance come 2019 and this suggests that anyone warming up to succeed him must be sure of himself as the standard has been set. What is now required from the citizenry, particularly residents of the state, is total support and cooperation to enable the present administration of the APC realise its set goals which revolve around life abundance, prosperity and democracy stability,” the statement said.