Delta, BofA Drop Support For ‘Julius Caesar’ That Looks Too Much Like Trump 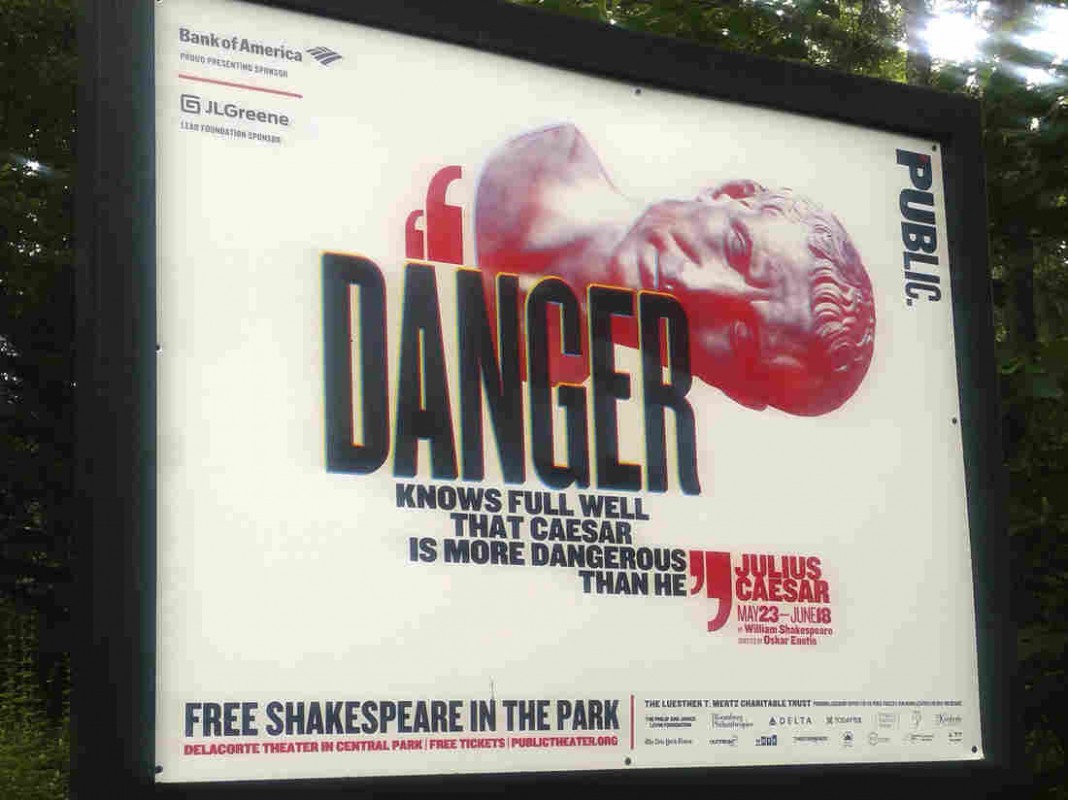 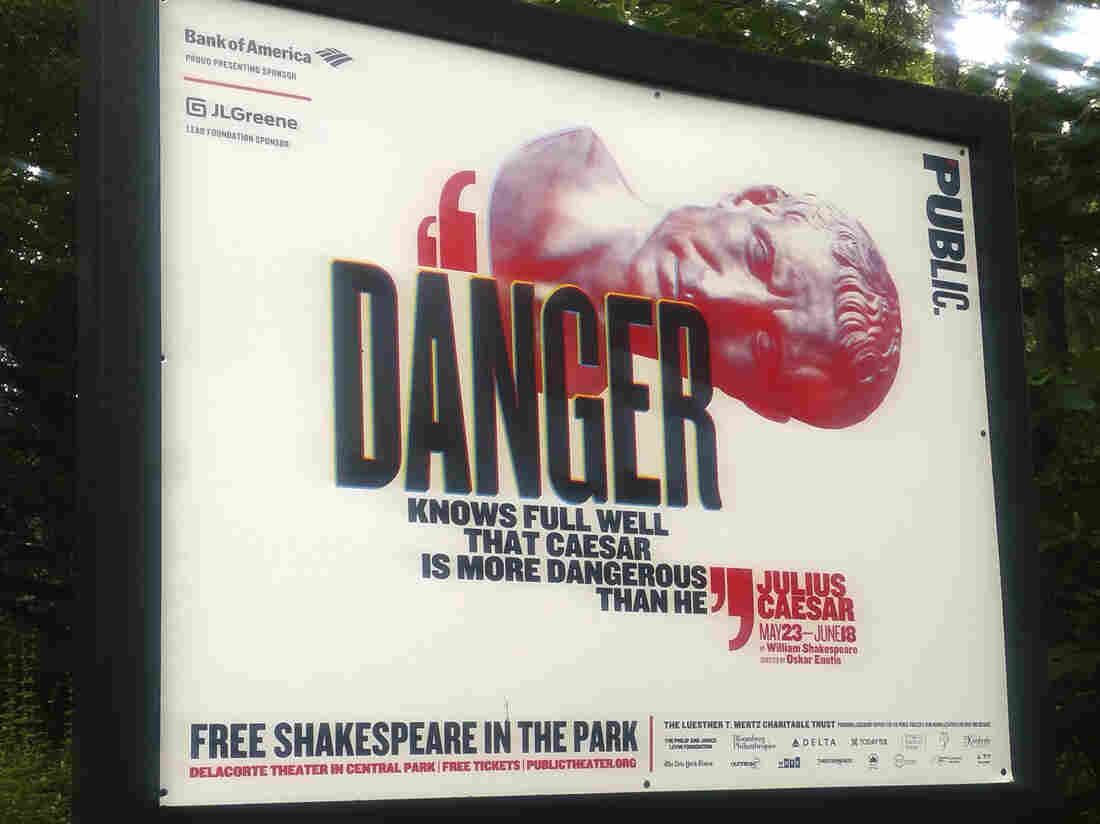 The Public Theater’s production of Julius Caesar in New York’s Central Park features a titular character who wears a Donald Trump-like costume and is stabbed to death on stage. Verena Dobnik/AP hide caption

The Public Theater’s production of Julius Caesar in New York’s Central Park features a titular character who wears a Donald Trump-like costume and is stabbed to death on stage.

Two major corporate sponsors have pulled their support for a New York City production of Julius Caesar. At issue: The titular role has an unmistakably Trumpian air. And, um, spoiler alert: He gets assassinated.

The Julius Caesar in the The Public Theater’s production “has blond hair, a fondness for long ties and a fashionable wife who speaks with a Slavic accent,” as NPR’s Jeff Lunden reports. Conspirators stab him to death on stage, making for some Kathy Griffin-like gore.

In the funeral scene, according to “Marc Antony exposes not just Caesar’s sliced-up garment, as Shakespeare indicates, but also his bare, wound-ripped flesh.”

Delta and Bank of America both pulled their sponsorship over the production, which has been the target of criticism in recent days from right-leaning outlets such as Breitbart and Fox News, as well as from President Trump’s son Donald Trump Jr.

“No matter what your political stance may be, the graphic staging of Julius Caesar at this summer’s Free Shakespeare in the Park does not reflect Delta Air Lines’ values,” Delta said in a statement to Deadline Hollywood.

“Their artistic and creative direction crossed the line on the standards of good taste. We have notified them of our decision to end our sponsorship as the official airline of The Public Theater effective immediately.”

Bank of America also terminated support for the production, though it will continue its relationship with the theater. “The Public Theater chose to present Julius Caesar in a way that was intended to provoke and offend,” the bank said in a statement to Deadline. “Had this intention been made known to us, we would have decided not to sponsor it.”

I wonder how much of this “art” is funded by taxpayers? Serious question, when does “art” become political speech & does that change things? https://t.co/JfOmLLBJCn

On Sunday, Donald Trump Jr. tweeted a link to a Fox News story that described the production this way: “A New York City play appears to depict President Trump being brutally stabbed to death by women and minorities.”

Pointing to the play’s complex characters and consequences, the production’s director, Oskar Eustis, wrote on the theater’s website, “Julius Caesar can be read as a warning parable to those who try to fight for democracy by undemocratic means. To fight the tyrant does not mean imitating him.”

It’s not unusual for productions of very old plays to use modern dress and current political references. A 2012 New York production of Julius Caesar by The Acting Company was set “at our precise historical moment, in Obama’s Washington, D.C. The capital is rocked by ‘Occupy Rome’ protests,” wrote Noah Hillman in The American Conservative, noting that this Caesar was “a tall, charismatic African-American politician; he doesn’t look or sound much like Obama (he more closely recalls Michael Jordan), but the audience is unquestionably going to read him as an Obama stand-in nonetheless.”

Gregg Henry, who plays Caesar in the Public Theatre production, made the Trump connection overt. “I have great costumes and wigs that show you that this could be Trump. But I’m also trying to bring in the larger knowledge of tyrants,” he told Backstage. “Hopefully, I’m able to sort of show what’s happening with this president, tweak this president for kind of what he is in a lot of ways and also show the dangers of dealing with a tyrant or possible tyrant in our country.”

As anyone who knows the play can attest, the killing of Caesar is complicated, and the tragedy has no clear protagonist.

“This puts the moral burden where I imagine Mr. Eustis wants it: on the audience,” the Times wrote in its review. “We are asked to consider how far citizens may go in removing a destructive leader, and we are warned about unforeseen consequences. Dressing Caesar as Trump gives that agenda its juice but leaves the production a bit desiccated and incoherent thereafter. To be fair, this is a problem built into the play, which like all of Shakespeare’s tragedies begins with astonishing rhetoric and ends as an abattoir.”

But for Eustis, Caesar‘s ambiguity is a defining factor:

“Julius Caesar is about how fragile democracy is. The institutions that we have grown up with, that we have inherited from the struggle of many generations of our ancestors, can be swept away in no time at all. The difficulty in determining the protagonist of Julius Caesar — there are at least four credible candidates – is not a formal weakness of the play, but rather essential to its structure. When history is happening, when the ground is slipping away under us and all that is solid melts into air, leadership is as transitory and flawed as the times.”

“And in case you were wondering: no, we didn’t write any new lines. It’s all Shakespeare.”

The production, which has been in previews since May 23, opens Monday night.