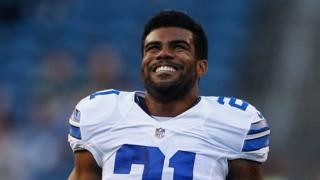 Dallas Cowboys running back Ezekiel Elliott has been suspended for six games after domestic violence incidents, the NFL announced.

The move came after a yearlong league investigation into claims he abused his then-girlfriend in Ohio in 2016.

Prosecutors decided not to charge Elliott, but the league’s inquiry found substantial evidence showing physical confrontations with his ex-girlfriend.

The 22-year-old footballer has three days to appeal the decision.

According to a statement by the National Football League (NFL), Elliott will be suspended without pay for “violating the league’s Personal Conduct Policy”.

According to ESPN, the suspension also voids the guarantees in his four-year – nearly $25m (£19.2) contract – with the Cowboys.

He may also be forced to forfeit other payments received from the team including over $1m in signing bonus pay.

The ruling also requires Elliott to be evaluated for counselling or treatment and to provide evidence that he has followed up on any recommendations made.

The statement described the year-long “extensive investigation” by the league, in which they reviewed “thousands of text messages”, spoke to medical experts, witnesses and the victim herself.

NFL commissioner Roger Goodell consulted with a team of advisers, the statement says, adding that they were present along with Elliott’s legal team when he was interviewed by league officials during a meeting on 26 June 2016 in New York City.

In a statement to ESPN, Elliot’s reprensentatives Frank Salzano and Scott Rosenblum said the NFL findings were full of “factual inaccuracies and erroneous conclusions”.

They said the report “‘cherry picks’ so-called evidence to support its conclusion while ignoring other critical evidence”.

Tiffany Thompson, who alleges the abuse, described her relationship with the star athlete as “toxic”.

She claims that he attacked her five separate times in July 2016 in Columbus, Ohio.

Prosecutors chose not to press charges after witnesses made conflicting statements and found evidence that Ms Thompson had asked friends to lie about one of the encounters.

But despite the decision by the attorney general, NFL officials said they found “substantial and persuasive evidence” of domestic assault.

In Elliott’s rookie year with the Cowboys he scored 15 touchdowns and ran the ball for 1,631 yards, setting a team record for a new recruit.

The NFL has been rocked by several domestic abuse scandals in recent years.

Elliot has been involved in a number of off-the-field incidents.

A video in March showed the football star pulling down a woman’s top at a St Patrick’s Day parade in Dallas.

The NFL cited the video in its letter to Elliott, calling it “inappropriate and disturbing, and reflecting a lack of respect for women”, but said it did not factor into its decision.

He also reportedly punched a man and sent him to the hospital during an altercation at a nightclub in July. He was not arrested or charged with any crimes.

If he chooses not to appeal the decision, Elliott’s suspension begins on 2 September and he can return to the active roster on 23 October.