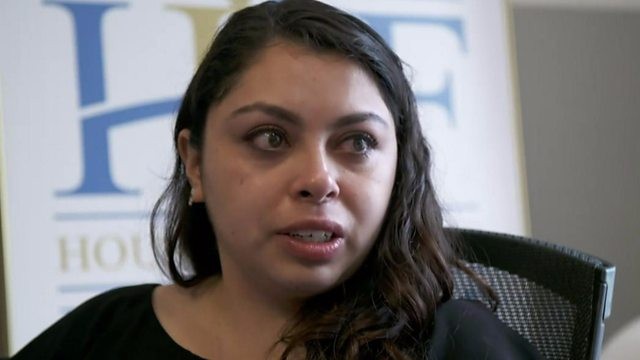 US President Donald Trump has reasserted his opposition to legalising the status of hundreds of thousands of undocumented immigrants brought to the United States as children.

He declared on Twitter that Republicans should “go to Nuclear Option to pass tough laws [on illegal migrants] NOW”.

He accused Mexico of doing “very little, if not NOTHING”, to stop migrants crossing its northern border.

The top candidates for Mexico’s presidency have hit out at Mr Trump.

Mr Trump wanted to scrap the Deferred Action for Childhood Arrivals (Daca) programme from March but judges halted the move, saying that the Obama-era scheme providing temporary permits for work and study must remain in place while legal challenges are heard.

The scheme is now closed to new entrants but existing members may renew their benefits while the programme exists.

Mr Trump’s tweets referred to “caravans” coming, a possible reference to a caravan of more than 1,000 migrants which had featured earlier on Sunday on Fox & Friends, known to be one of Mr Trump’s favourite TV shows.

The mostly Honduran migrants, including whole families, are travelling together through Mexico to try to protect themselves against criminal gangs and harassment. Some say they will claim asylum once they reach the US border.

‘They want to take advantage’

The approximately 800,000 people protected under Daca are known as “Dreamers”.

But on Twitter, Mr Trump said the programme was being misused by a growing number of illegal migrants and accused Mexico of being lax about border security.

Mr Trump appeared once again to blame current illegal immigration on the Daca programme as he arrived for an Easter church service near his Mar-a-Lago resort in Florida.

“A lot of people are coming in because they want to take advantage of Daca and we’re going to have to really see,” he said. “They had a great chance, the Democrats blew it.”

What did the Mexican candidates say?

Mr Trump’s tweets come amid tense negotiations over the North American Free Trade Agreement (Nafta) between his administration and that of Mexican President Enrique Peña Nieto.

Mexico goes to the polls on 1 July to elect a new president.

Leftist front-runner Andrés Manuel López Obrador said his country and its people would not be the punch ball (or pinata) of any foreign government.

The conservative candidate, Ricardo Anaya Cortés, challenged Mr Trump to deal with security issues on his own side of the border.