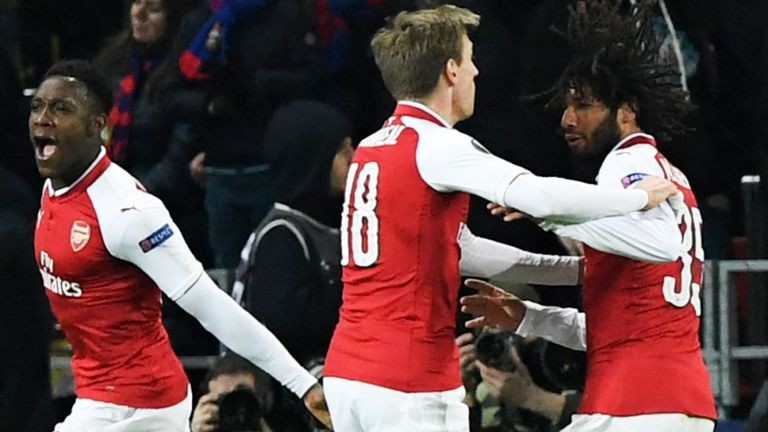 Arsenal advanced to the Europa League semi-finals after a 2-2 draw at CSKA Moscow handed Arsene Wenger’s side a 6-3 aggregate victory.

CSKA were looking to become just the second team to overturn a three-goal first-leg deficit in the Europa League knockout stages, and gave themselves hope when Kirill Nababkin (50) added to Fedor Chalov’s opener (39).

One more unanswered goal would have sent CSKA through, but Danny Welbeck sprung up with Arsenal’s first shot on target (75) to quell the comeback before Aaron Ramsey scored an equaliser late on (90+2) – both superbly assisted by Mohamed Elneny.

Arsenal will discover their semi-final fate on Friday morning, with Atletico Madrid, Marseille and RB Salzburg joining them in the pot.

When is the Europa League draw?

The Europa League semi-final draw gets under way at 11am GMT on Friday. We will bring you live updates on skysports.com and on Sky Sports News.

Looking to build on last week’s first-leg double, Alexandre Lacazette went closest in the opening half-hour with an attempt which was blocked behind for a corner.

However, CSKA started to believe the comeback was on just before half-time, with Chalov reacting quickest to tap in the rebound after Petr Cech saved well from Nababkin’s header.

With the wind in their sails, the hosts pushed for a second before half-time, and went within a yard of doing so when Kristijan Bistrovic’s powerful long-range effort sailed narrowly wide.

Man of the match: Aleksandr Golovin

Five minutes into the second half, CSKA moved within one goal of a semi-final spot when Cech parried Aleksandr Golovin’s dipping effort into the path of Nababkin.

Cech palmed away Golovin’s low free-kick moments later, while Arsenal remained without a shot on target down the other end as Laurent Koscielny flashed a shot over.

Arsenal’s sole flash of brilliance put the tie beyond CSKA’s reach, as Welbeck played a tidy one-two with Elneny before slotting his effort beyond Igor Akinfeev.

Welbeck’s goal deflated the hosts, and Ramsey piled on the woe with an injury-time leveller as the Gunners reached a first semi-final in Europe since the Champions League in 2009.

Man of the match – Aleksandr Golovin

The 21-year-old central midfielder ran the show in Moscow. It was his sublime free-kick in the first leg which handed CSKA an away goal, and his display on Thursday night almost guided the Russians into the last four.

Credit must go to Elneny however, as his two assists laid it on a plate for Welbeck and Ramsey – two moments of quality which Arsenal so desperately needed.