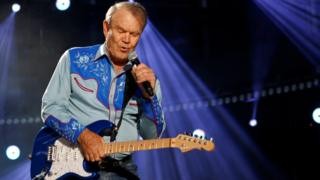 Rhinestone Cowboy singer Glen Campbell has died at the age of 81 after “a long and courageous battle” with Alzheimer’s disease, his family said.

“It is with the heaviest of hearts that we announce the passing of our beloved husband, father, grandfather,” their statement said.

The legendary guitarist announced his Alzheimer’s diagnosis in 2011.

A self-taught prodigy, he rose from a poor rural childhood to release over 70 albums and sell 45 million records.

He was credited with paving the way for other country crossover artists such as Dolly Parton and Kenny Rogers.

Dolly Parton was among many stars who paid tribute to Campbell, describing him as “one of the greatest voices of all time”.

Brian Wilson of the Beach Boys said he was “very broken up” by Campbell’s death.

“An incredible musician and an even better person,” Wilson tweeted.

“You were a shining light in so many ways,” he tweeted

The son of a sharecropper, Glen Travis Campbell was born in Arkansas on 22 April 1936, the seventh of 12 children.

His first guitar cost $7 and he taught himself to play.

Campbell made his name in the music business as one of the top session guitarists in Los Angeles, and helped hone producer Phil Spector’s famous Wall of Sound technique.

He toured for three months in 1965 with the Beach Boys, filling in for singer Brian Wilson after he suffered a breakdown.

Campbell played on hundreds of tracks including Daydream Believer by The Monkees, You’ve Lost That Lovin’ Feeling by The Righteous Brothers, Strangers in the Night by Frank Sinatra and Viva Las Vegas by Elvis Presley.

But Campbell always wanted to make it under his own name.

After a string of flops, in 1967 he finally found his distinctive country pop sound with hits like Gentle On My Mind and By the Time I Get to Phoenix.

Wichita Lineman went to No 1 in the US, won a Grammy and became much requested by US soldiers fighting in Vietnam.

By the end of the 1960s, Campbell was the fastest rising star in American pop with his own TV show, The Glen Campbell Goodtime Hour.

He also picked up a starring role alongside John Wayne in the original version of True Grit.

The peak of Glen Campbell’s career was in 1975 when he topped the charts around the world with Rhinestone Cowboy.

Despite another smash hit in 1977 – Southern Nights – his private life was in turmoil.

Despite a relapse in 2003, when he was arrested for drunk-driving and his police mug shot was shown around the world, the last two decades had been more settled.

He remarried, started a new family and renewed his Christian faith, while a new generation discovered his music.

“I got down on my knees and prayed. And, eventually, I got rid of those demons,” he said in an interview.

Like his friend Johnny Cash, Campbell released acclaimed new albums with younger musicians, covering songs by contemporary artists like U2 and The Foo Fighters.

In 2005 he was inducted into the Country Music Hall of Fame.