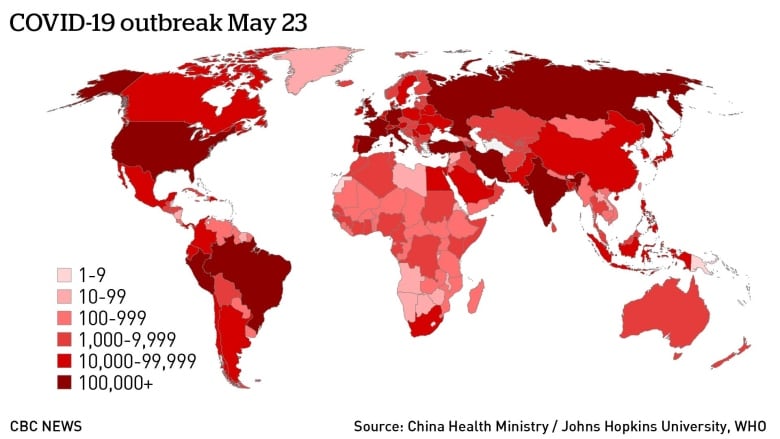 Negotiations are to continue this weekend among federal political parties over how Parliament should function as the COVID-19 crisis drags on.

Conservative Leader Andrew Scheer has said it should reconvene on Monday for regular in-person sittings, arguing that the current practice of virtual meetings has run its course. He wants Parliament declared an essential service.

The House of Commons has been largely adjourned since mid-March. Fewer than three dozen MPs have been meeting in the Commons chamber once a week, and twice a week by videolink, giving more MPs a chance to participate without risk of spreading the novel coronavirus.

Prime Minister Justin Trudeau says in-person sittings could pose a health risk but he’s open to some sort of compromise, what he calls a “hybrid” model where some people meet in person while others take part through videoconferencing.

As warmer weather draws more people outside, public health officers have been urging Canadians not to get complacent about safety. Deputy chief public health officer Dr. Howard Njoo says people should get outside for fresh air and exercise, but physical distancing is still recommended.

Njoo says it is too early to know whether an uptick in cases in Ontario in the last few days is a sign of a second wave of infections or something else but says overall Canada has been good at flattening the curve.

WATCH | Ottawa looking into using one contact tracing app for all of Canada:

Prime Minister Trudeau says he hopes there will be one smartphone app that Canadians can use to track and prevent the spread of COVID-19. 1:54

As small businesses begin reopening, some are starting to add a COVID-19 surcharge. It’s there to help cover the cost of personal protective equipment, and for some, to make up for income lost from having to reduce the number of customers they serve.

Winnipeg hair salon owner Joanne Rempel opened three weeks ago and says masks and hand sanitizer are expensive. She has scaled down the workplace, cutting the number of sinks and stylist chairs. Rempel herself is doing without a salary because she is just trying to get all her stylists back to work and pay the rent.

Some small businesses like hair salons are adding surcharges to the cost of their services to make up for the expenses associated with additional sanitation, protective gear and physical distancing. 1:46

Non-medical masks increasingly look likely to be part of the country’s new normal, especially in places where physical distancing is largely impossible. In Winnipeg for example, unions appealed this past week for masks to be mandatory on buses.

The Ontario government is recommending, but not enforcing masks on public transit as the province’s economy gradually reopens. It says transit agencies should provide sanitizers in the vehicles, barriers between drivers and passengers, and physical distancing measures.

Ontario and Quebec have most of Canada’s COVID-19 cases and as infections continue, so do the concerns the provinces are reopening too soon. 2:04

Health Minister Patty Hajdu said Friday her ministry has been working with provinces to make sure they have the materials needed to meet their testing goals, including swabs, reagents and people to do the work.

“We see ourselves as building capacity for all the provinces and territories to test to their fullest need,” she told the House of Commons committee on government operations. Each province has its own testing strategy, and Ottawa must adapt its support to meet their individual needs, she said.

As of 6:20 a.m. ET on Saturday, Canada had 82,480 confirmed and presumptive coronavirus cases, with 42,607 of those considered resolved or recovered. A CBC News tally of deaths attributed to coronavirus based on provincial data, regional health information and CBC’s journalism stood at 6,342.

Federal public health officials have been encouraging people to stick with frequent handwashing, cough etiquette, physical distancing and staying home when sick. On Wednesday, Canada’s Chief Public Health Officer Dr. Theresa Tam added another recommendation, saying people should wear non-medical face masks in public when they aren’t sure they will be able to physically distance.

Here’s what’s happening in the provinces and territories

British Columbia , which has had some success flattening the curve and is gradually reopening,  reported 18 new coronavirus cases and three more deaths on Friday. The total number of confirmed cases released on Friday includes 10 people who were infected in Alberta in connection with the outbreak at the Kearl Lake oilsands project, who self-isolated there before returning home to B.C. Those cases had not previously been included in B.C.’s numbers. Read more about what’s happening in B.C.

Calgary and Brooks will join the rest of Alberta by allowing bars, restaurants, hair salons and barbershops to open on Monday, while more restrictions will be lifted across the province on June 1.

Premier Jason Kenney said Friday that the decision comes on the advice of the chief medical officer of health, though he warned that the virus is still a threat.

“While this is positive news for many, it doesn’t mean that we’re out of the woods yet,” said Kenney. Read more about what’s happening in Alberta.

Saskatchewan said it will move to the next phase in its reopening on June 8. Bars and restaurants are among the businesses that will be allowed to reopen in Phase 3, though they will have to operate at reduced capacity and with physical distancing measures in place. Read more about what’s happening in Saskatchewan.

There are two more cases of COVID-19 in  Manitoba, public health officials announced Friday, bringing the number of active cases in the province to 18, and the total provincial caseload to 292.

Friday ended a three-day streak of no new cases being found in the province. Over the past seven days, three cases of COVID-19 have been identified. Read more about what’s happening in Manitoba.

Ontario reported 441 new cases on Friday, the most on a single day since May 8. Although hospitals around the province are now allowed to resume non-emergency surgeries, many of them can’t, either because they’re too full or don’t have enough protective equipment. Read more about what’s happening in Ontario.

WATCH | Doug Ford once again vows to ramp up testing:

‘We’re on this,’ says Ontario Premier Doug Ford, insisting that testing for COVID-19 will improve in the province. 1:06

The Quebec government is aiming to have children back in schools in the fall, ideally full time. A working document prepared by the province also included a second option, where students would go to school part time, with fewer students in each class. Read more about what’s happening in Quebec, which has also been falling short of its testing goal.

New Brunswick reported no new coronavirus cases on Friday, a day after officials reported a case in a person under the age of 19 in the Campbellton region. Read more about what’s happening in N.B.

A Nova Scotia man who contracted COVID-19 in mid-March is donating plasma to a clinical trial. “We got such great care from the health-care folks that we wanted to give something back,” said Donnie Clarke. Read more about what’s happening in N.S., which reported two new cases and two new recoveries on Friday.

Prince Edward Island is moving to its next phase of reopening Friday, and is now allowing retail stores to open their doors to the public with physical distancing measures. Read more about what’s happening on P.E.I.

Even though Canada is slowly reopening, testing isn’t ramping up to match the rising risk of infections. That worries experts, and has the federal government offering assistance. 2:04

Newfoundland and Labrador reported no new coronavirus cases on Friday, marking 15 days without a new case. Read more about what’s happening in N.L., where the government is announcing new measures to help businesses impacted by the pandemic.

There were no new cases of coronavirus reported in Yukon, the Northwest Territories or Nunavut on Thursday. Read more about what’s happening across the North.

Here’s what’s happening around the world

U.S. President Donald Trump visited the swing state of Michigan to talk about flood relief, and his self-proclaimed success in dealing with the pandemic, but his ongoing feud with state politicians over mail-in ballots took centre-stage. 1:59

WATCH | Italians use creativity to counter damage from COVID-19:

As Italy re-opens, businesses in the design and fashion capital of Milan see creativity as a way to counter the damage done by COVID-19. 2:02
Share
Facebook
Twitter
WhatsApp
Pinterest
Linkedin
ReddIt
Email
Print
Tumblr
Telegram
Mix
VK
Digg
LINE
Viber
Naver
Previous articleWill COVID-19 lead to an exodus from crowded offices in downtown towers? Don’t count on it, experts say
Next articleShops are reopening after COVID-19, and some are adding a new line to your bill to pay for it