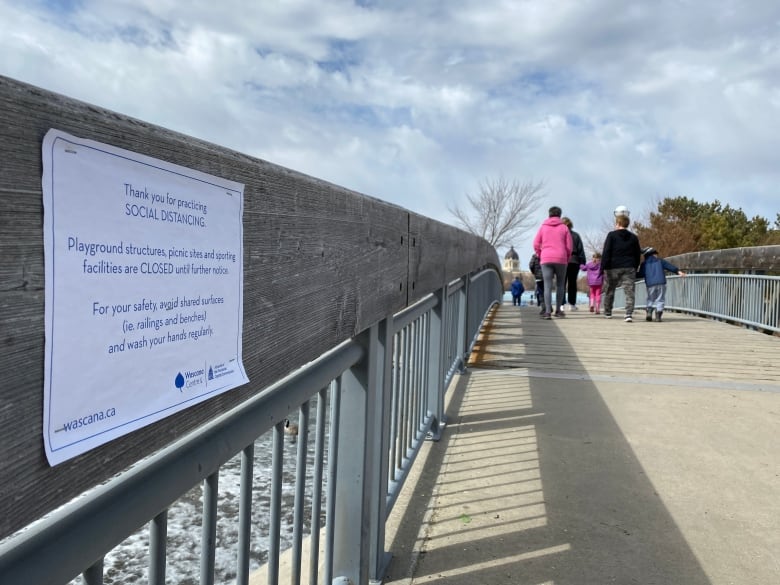 People in Saskatchewan expressed concerns about large gatherings and lack of social distancing this weekend as temperatures rose. Those concerns are shared by the premier and the opposition leader.

Last week, the government and Premier Scott Moe shared new guidelines around gatherings, which said families could choose two to three other households to visit with, but maintain a small circle and practice physical distancing.

On Monday, Moe said one event, which he did not specify was particularly troubling to him.

“I did hear of one event that may have occurred this past weekend and I would find that deeply disappointing on a number of levels that an organization would organize an event given where we are.”

A spokesperson for Moe confirmed the quote referred to a privately organized classic car parade on Sunday in Carievale, Sask.

Moe said he “would hate to see” the effort to stop the spread of COVID-19 “undermined” by people organizing large events or aiming to “circumvent” public health recommendations and orders.

“This success that we are currently enjoying is not guaranteed to continue if we don’t take our personal responsibility very seriously.”

“We should not be under any illusions that we are back to business as usual.”

The new advice coupled with warmer weather had many enjoying the outdoors but some shared their concerns on social media.

I’ve been delivering parcels all over Regina today. I’ve seen 5 gatherings over ten with no distancing, one dad taking the tape off a playground for his kids, and a ton of people out in general…. Most of this strangely in the “suburb areas”

Physical distancing guidelines have been thrown by the wayside in <a href=”https://twitter.com/hashtag/yxe?src=hash&amp;ref_src=twsrc%5Etfw”>#yxe</a>. Dudes wrestling, folks hanging out in groups of 6+. I know it’s hard when it’s nice, I just hope people trust the ones their with to be <a href=”https://twitter.com/hashtag/Covid?src=hash&amp;ref_src=twsrc%5Etfw”>#Covid</a> free.

We stopped to buy some beer and Superstore was insanely busy. The entire city of Saskatoon was busy like it was a normal summer weekend day. I don’t know how I feel about all this but I guess we will see. <a href=”https://twitter.com/hashtag/yxe?src=hash&amp;ref_src=twsrc%5Etfw”>#yxe</a>

Just left the east end Walmart in <a href=”https://twitter.com/hashtag/YQR?src=hash&amp;ref_src=twsrc%5Etfw”>#YQR</a>. They’re letting everybody in, no restrictions on the # of people allowed. It’s damn busy in there, almost packed. SO not <a href=”https://twitter.com/hashtag/covidsafe?src=hash&amp;ref_src=twsrc%5Etfw”>#covidsafe</a>.

Associate Professor of Psychology at the University of Waterloo Igor Grossmann said people will be less compliant with physical distancing rules and social gathering limits if the message is confusing and constantly changing and if people feel less afraid of the virus threat.

“Having a clear communication line from a policy perspective is paramount,” said Grossmann.

He said that is particularly important when there is “an invisible threat” like the COVID-19 virus.

Grossmann said people followed the rules early on because of the “psychological threat” of the virus and clear rules.

He said over time it is natural for the feeling of being threatened to “wear off.”

Grossmann said the more transparent rule-makers can be about reopening plans, the more likely people are to follow the rules.

“If it’s vague it introduces uncertainty and uncertainty leaves room for all sorts of interpretation because of motivated reasoning, where people just interpret it in their favour.”

He said now with provinces taking divergent paths we are seeing a divergence in social distancing rules and how much they are followed.

In Wascana Park on Monday, Debbie and Hugh Balkwill say they are looking forward to seeing family in person again.

The couple has been self-isolating together, just the two of them, but are ready to expand their circle to include their children and grandchildren.

They say next week, they will have a family BBQ with their children and grandchildren — up to 10 people — where everyone tries to stay two metres apart

“I’m not worried because we’ve been taking care and so have they, so we’re not concerned. We’re actually really excited about it. Looking forward to it,” she said.

She said she may make “one concession” and hug her small grandchildren against her leg.

Balkwill said she thinks the government’s messaging has been good.

Others think the new guidelines will bring people who have been stuck inside and isolating, out.

Stefani Kleppe is a school teacher in Regina. She has lung problems and said she won’t change her behaviour, but expects she’ll have to keep an eye out for other people more.

“The flood gates will open. People are just going to come out in droves because they’ve had enough of being cooped up. It feels like things are slowly becoming normal again, very slowly. It feels normal again,” said Brad Evanochko.

On Thursday, when Premier Scott Moe and chief medical health officer Dr. Saqib Shahab announced the province’s reopen plan, the document did not include the new gathering guidelines.

Moe did say it was fine for a few friends or family to have a barbecue, as long as everyone is practicing proper physical distancing, but such gatherings should be strictly limited to people living within two to three households.

“I have a son that I haven’t seen for six weeks. I’d love to have a barbecue with him and cook a locally-grown and processed steak sooner rather than later, and I think we will,” the premier said Thursday.

Shahab said people need to be careful when getting together even in a small group because the virus has spread at events where food is shared.

On CBC Saskatchewan’s The Morning Edition Friday, Moe said people who do decide to gather should be able to trace all the people they have been in contact with over the past two weeks and “allow the length of that list to kind of guide your decisions on who you’re going to be in contact with.”

On Friday afternoon, the government issued clarity on what the guidelines entailed.

“Saskatchewan residents should be aware that the public health order limiting gatherings to no more than 10 people remains in place. However, with extreme caution and under the following conditions, one or two close families may form an extended household group,” the government said.

Opposition Leader Ryan Meili said he is concerned with how people have responded to the new guidelines.

Meili said he thought Moe “sort of gave the impression that it was open season to go visit friends and family and whether that was the intention or not. It appears that may have been the effect.”

“I really would want to emphasize some of the language coming out is leading people to think that we’re done with this that it’s passed. We did it. What we’re doing is working but it hasn’t yet worked. It’s not over,” Meili said.

Meili said the message of what is and is not allowed may not have been received.

“It was a missed opportunity. I hope in the coming days he will see what you and others have already described and urging people to recommit to physical distancing if not we really do face a serious risk of an outbreak happening.”

Meili said the reopen announcement and the messaging about the new guidelines on gatherings have caused “confusion and mixed messages for the public.”

“So that’s a problem. I would really like to see some clear guidelines.”