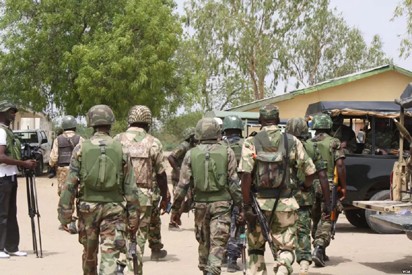 At least, 400 residents of Ikot-Offiong community in Odukpani Local Government Area of Cross River State have embarked on a peaceful protest to the Government House to appeal for the release of their 17 arrested youths by soldiers.

The community alleged that 17 of their youths were arrested on Friday, May 19, 2017 at the Odukpani end of the Calabar/Itu Bridge by 2 Brigade of the Nigerian Army in Uyo, Akwa Ibom State.

The people of Ikot-Offiong in Odukpani and the people of Oku-Iboku community in Akwa-Ibom had in the past witnessed communal crisis that claimed the lives of many, while properties worth millions of naira were destroyed.

Southern City News observed that the protesters carried placards with inscriptions like, ‘We will die defending our ancestral home’, ‘Governor Ben Ayade, please, help us release our 17 youths’, ‘Federal Government, please, help us secure our boundaries’, among others.

Speaking on behalf of the community, Mr. Philip Okon said they embarked on the peaceful protest to inform the state governor and residents of the state that 17 youths from the community were arrested by soldiers from Uyo.

Okon, who is the Chairman, National Youth Council of Nigeria, Odukpani chapter, explained that it was not proper for soldiers from Uyo to invade Cross River community to arrest the 17 unarmed youths over inter-state communal crisis.

He said, “We are here today to protest the illegal arrest of our 17 youths by soldiers from 2 Brigade Uyo. We are demanding for their unconditional release.

“The soldiers said that the youths were caught with firearms; if their allegation is true, then they should return them back to 13 Brigade, Nigerian Army in Calabar for trial.

“It is very risky keeping them in Uyo because this will further deepen the crisis between both communities that share a common boundary.

“We are calling on the state governor, the President and members of the National Assembly from the state to help us by releasing our youths.”

After two hours of consistent signing of solidarity songs at the gate of the governor’s office, no government official came out to address them.

The protesters, however, receded after an unidentified security official promised to convey their grievance to government.

Efforts to speak with the State Security Adviser, Mr. Jude Ngaji, proved abortive as his telephone lines were switched off.