Comey’s testimony could turn congressional probes toward question of obstruction 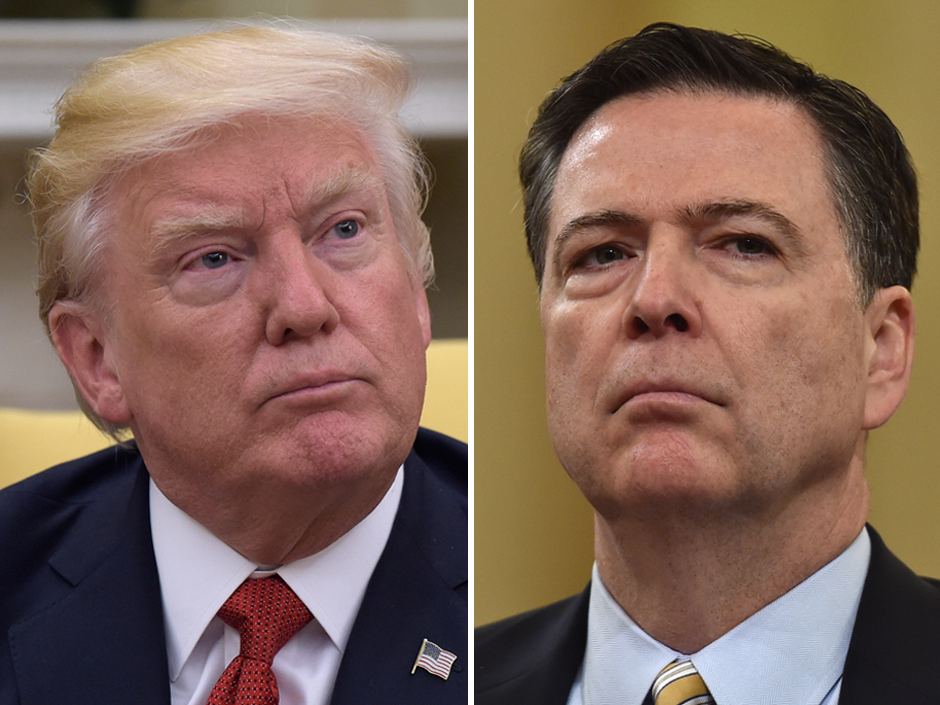 Former FBI director James B. Comey’s highly anticipated appearance on Capitol Hill Thursday could bring the question of whether President Trump attempted to obstruct justice to the forefront of several wide-ranging congressional investigations.

In testimony before the Senate Intelligence Committee scheduled to begin at 10 a.m., Comey is likely to be asked about his firing as well as reports that Trump asked him to end an investigation into former national security adviser Michael T. Flynn. In a preview of his opening statement released by the committee Wednesday afternoon, Comey said Trump said to him during a meeting at the White House in February: “I hope you can see your way clear to letting this go, to letting Flynn go. He is a good guy. I hope you can let this go.”

Comey’s testimony comes on the heels of new revelations that Trump also asked two of his top intelligence officials to intervene with Comey to back off its focus on Flynn. In testimony before the Senate Intelligence Committee Wednesday, those two officials — Director of National Intelligence Daniel Coats and National Security Agency Director Michael S. Rogers — declined to describe private conversations with the president. Instead, they both said they never felt pressure to do anything inappropriate.

A series of such revelations in recent weeks have fueled accusations of obstruction, but at least four congressional inquiries have remained wide-ranging, with some lawmakers expressing greater concern about whether Trump campaign associates colluded with Russian officials to meddle in the 2016 election and others more focused on prosecuting those who have leaked classified information to the media.

In addition to those congressional probes, the FBI is heading up a counterintelligence investigation into collusion and Russia’s interference last year.

Still unknown is whether Comey will offer more details about his conversations with Trump than he already detailed in his opening statement. Additionally, his opening statement does not recount his firing. He will be careful not to discuss classified information, which is likely to prevent him from providing new details about the Russia probe, several associates said.

Comey also will try to steer clear of saying anything that could compromise or constrain the work of special counsel Robert S. Mueller III, now heading up the FBI’s investigation, such as offering legal or prosecutorial judgments, these people said.

Comey insisted on testifying publicly, but he will also address the committee behind closed doors following the public forum.

An intensification of the obstruction question could cause the center of gravity to shift on Capitol Hill. Besides the FBI, the House and Senate intelligence panels are exploring Russian meddling and the potential politicization of intelligence gathering. Members of both parties and in both chambers generally agree that the Senate investigation is the most comprehensive and advanced of the congressional probes.

The House and Senate Judiciary committees could become a more central focus after Thursday if Comey’s testimony suggests that Trump’s actions constituted obstruction of justice, as that could potentially shift congressional focus from intelligence matters to legal and criminal matters that those two committees oversee. In addition, House Judiciary is where any discussion of impeachment proceedings would begin.

To date, Democrats are split on the question of impeachment proceedings, with some readily suggesting the possibility but House Minority Leader Nancy Pelosi (D-Calif.) impatiently dismissing that as premature.

Still, Democrats again this week called for Comey to testify next before the Senate Judiciary Committee as the panel continues its duties overseeing the FBI and preparing to confirm Comey’s successor. An aide on the House Judiciary Committee said the panel has no current plans to launch a new, separate inquiry.

The House Oversight Committee also has begun exploring how Trump and his associates may have attempted to influence the FBI investigation.

In addition to Flynn, current and former Trump associates, including his campaign manager, Paul Manafort, former adviser Carter Page, and Jared Kushner, his son-in-law and senior adviser, are the focus of the ongoing probes.

Republicans, already wary of how the investigations are impeding their legislative ambitions, said they will be listening Thursday for how Comey describes what the president said to him in a series of meetings and what he told Trump in response.

“I think the whole world has the same question,” said Sen. Bob Corker (R-Tenn.), adding that Comey’s version of events is “possibly going to be very illuminating.”

Sen. Ron Wyden (D-Ore.), a long-serving member of the Intelligence Committee, said that “Having more details — fleshing out what was said, who was involved, was it documented — I think will very much clarify where things were at the time Mr. Comey was fired.”

Legal analysts said the testimony adds detail that would beef up an obstruction of justice case.

While no one meeting itself is the smoking gun that Trump tried to illegally hinder an investigation, the totality of his interactions with Comey suggest he might have acted corruptly, said Cornell Law School Professor Jens David Ohlin.

“I think that the stuff that’s now been put on the record, if you add it all up together, to me it spells obstruction of justice,” Ohlin said. “The pieces are (1) Trump demanding loyalty, (2) Trump telling Comey or directing Comey to end the Flynn or close the Flynn investigation (3) Trump firing Comey when Comey refuses to close the Russia investigation, and then (4) Trump admitting on national television that the reason he fired Comey was because of the Russia investigation and not any of the other reasons cited in the memo.”

Ohlin said that Trump seemed to have been particularly concerned with Flynn, though he said Comey’s interpretation that he only wanted the Flynn aspect of the probe shut down was “a very generous interpretation of Trump’s comments.”

At best, Ohlin said, Trump might be looking out for a “loyal surrogate” he thought had been wronged. At worst, he said, Trump might view Flynn “as this potential pressure point in the whole investigation in the administration, and that he’s a little bit worried about Flynn as someone who could potentially do a lot of damage if he were charged and decided to cut a deal and reached some sort of plea agreement where he had to provide information about the administration.”

“It’s a suggestive statement by President Trump and could be read as, ‘I did you a solid by not making a big deal out of the McCabe campaign contributions, you owe me,’” Cohen said.

Senators said that much of the attention on Thursday is expected to focus on a May 9 letter informing Comey of his firing. Trump wrote that he appreciated the director’s repeated reassurances that the president himself was not the focus of the investigation.

“I find that phrase to be very curious,” said Sen. Susan Collins (R-Maine), a member of the intelligence panel, who said she planned to press Comey for his side of the story and that she could “see no reason why” Comey wouldn’t be forthcoming.

“It makes a big difference what the exact words were, the tone of the president, the context of the conversation,” Collins said.

Wyden declined to tell reporters whether Comey planned to describe or read from his personal notes at the hearing, citing private “committee deliberations.”

“We’ll have debates about what constitutes obstruction of justice, but the comments the president made with respect to why he fired Mr. Comey on national television I think constitutes an attack on national institutions,” Wyden said, adding that Comey deserves a chance to publicly respond.

Other lawmakers said the former director will face close scrutiny too.

“Comey has to answer some hard questions about why didn’t he do more” to raise concerns about Trump’s comments, said Sen. Lindsey O. Graham (R-S.C.). “If you really believe that the man was trying to obstruct justice and you’re the head of the FBI, more than writing a note to yourself, you probably ought to do something about it.”

Comey is a practiced witness in front of congressional committees, having taken political heat from lawmakers over controversial decisions during his time as FBI director and previously as deputy attorney general during the second Bush administration.

He is also unbothered by the prospect of crossing his superiors in an open forum. In some ways, doing so has defined his career, from his arguments during George W. Bush’s presidency against the use of torture to his more recent testimony contradicting Trump’s claims that the government had wiretapped Trump Tower. On another occasion, in front of the House Intelligence Committee, Comey was asked to respond in real time to a Trump tweet claiming that Comey had testified that Russia did not influence the election. “It certainly wasn’t our intention to say that today,” Comey replied.

Comey may be pressed again to respond to Trump in real time, given that the president is not planning to refrain from Twitter on Thursday, according to administration officials.

He is also likely to be asked for his personal take on the tone of his meetings with Trump.

“I just hope he tells everything he can,” Senate Minority Leader Charles E. Schumer (D-N.Y.) said this week, adding that the former director “should tell the whole story. The American people on a subject as serious of this are entitled to the whole truth and nothing but.”

Other senior Democrats said that Comey’s appearance is by no means the end of congressional investigations — with some suggesting that it may constitute a major step toward more discussion of impeachment.

“There has been discussion about obstruction of justice charges or even impeachment, but very little can happen until we obtain the documents we need to evaluate the reports we have heard to date,” said Rep. Elijah E. Cummings (D-Md.), top Democrat on the House Oversight Committee. He faulted committee Republicans for not yet requesting or obtaining a series of memos that would detail Trump and Comey’s interactions.

Oversight Committee Chairman Jason Chaffetz (R-Utah) has requested Comey’s memos and papers and threatened to use his subpoena power to obtain them. But he is retiring from Congress this month, and GOP leaders have not yet picked a successor, leaving the committee investigation in limbo.

Pelosi is less ready to discuss impeachment than other Democrats.

“Anything you do has to be based on data, evidence, facts,” she said on ABC’s”The View.”

When the hosts persisted, Pelosi shot back: “Let’s take a deep breath and just calm down as a country. This is a serious matter.”