Civil war soldiers spared my life because of my kids — Ugbarugba 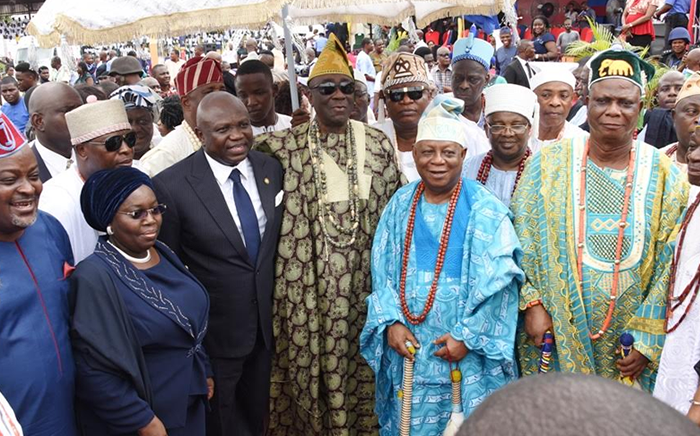 At 84, I thank the Almighty God for seeing me this far. Life is just there and I am living a quiet life right now. I do not feel sick and I do not pray for that. I am just fine.

How did you start your early life?

I was brought up in a family of six including my father and mother. I grew up with a father who was a great farmer in his time. He was one of the earliest farmers who tapped rubber and became prominent in Urhobo land as a successful farmer. I took interest in farming and I was rated to be the strongest for the job among my siblings because I actually worked hard. At that time, people used to come to my father to hire me to do their farm work. I thought I was going to be a farmer like him too but somehow, destiny changed my plans.

What did you do then?

At a point, I left the village for Sapele to stay with an uncle called Oyoyo. He was my mother’s relation.  While in Sapele, I got involved in the issuance of tally on the premises of African Timber and Plywood. I had to leave the village as a young boy for greener pastures in Sapele. It was from there a friend named Omoletu sold the idea of going to school to me.  I started my primary education in LA School in Ughelli in the early 1950s when I was about 18 years old, but later proceeded to the Sapele Technical College in today’s Delta State to continue my education. This was in the late 1950s. I did not know I would excel in education because I never knew I was brilliant until my friend lured me to school. I had always put in my best in farm work and I did not think all along that I could also do well in school. It was as a result of my exceptional performance in school that I got scholarship to study abroad. The scholarship was for me to proceed to Hammersmith College of Arts and Building Technology in the United Kingdom where I studied Brickwork; an aspect of civil engineering. I also did well in tertiary education.

When I earned the certificate, I returned to the Sapele Technical College where I was expected to be redeployed to the then Auchi Polytechnic as a lecturer. By this time, the civil war was already around the corner, I think it was around 1965 or 1966. About the same period, I had applied to work in the Nigerian Ports Authority in Lagos. When they were preparing to send me to Auchi, I got the letter of employment to resume work in the NPA headquarters in Lagos. I opted for NPA. That was how I landed in Lagos and worked in NPA for 15 years before I voluntarily retired in 1981. I rose to become a principal technical officer 1 (civil engineering) before retiring.

After retirement, what did you do?

I immediately went into business. I first had a brief stint with the Nigerian Security Printing and Minting Plc, then I established a contracting firm and got civil engineering contract jobs with Agip Oil. I later got the same contract job with Shell Petroleum Development Company which lasted for about six years. After then, I ventured into some businesses but they did not yield the desired results.

How did you survive the civil war?

During the civil war, I was staying somewhere around the Barracks area of Ojuelegba in Lagos State. The war itself was not felt in Lagos, maybe in that part of Lagos that I was staying. Life in Lagos was more of careful living. However, something remarkable happened to me towards the end of the war. It was around 1970, as a young officer in the NPA, I was allocated an official flat in the organisation’s staff quarters at Apapa. I relocated from Ojuelegba to Ikoyi. The day I went to inspect the house, I didn’t know that some soldiers were already occupying the flat. Meanwhile, NPA had given me the keys to the flat. When I got to the flat, I merely inserted the key into the front door and it opened. Lo and behold, there were two soldiers already balanced in the house with their guns with them. They were relaxing and from all indications, they had probably just returned from the combat front. They became alert instantly and looked at me, wondering what to do with me. I explained in a polite manner that the house had just been allocated to me and that I was given the keys. I told them frankly that I didn’t know that they were inside. They looked at me deeply and asked if I had children, I said yes. They said in harsh tone that it was my children that saved me, otherwise they had no reason to ask many questions.

They told me outrightly that they would have wasted me if not for my kids. That was my first encounter with the realities of the war. The soldiers were just occupying empty buildings illegally without being allocated to them. I left them and never went back to that flat again. I was given another flat.

How would you compare the way things were during your days and now?

In my days, people used to be very thorough with the way they did their things. You must ensure that when you are doing anything, you abide with laid down procedures, but the situation is different now. Today’s youths do things haphazardly without recourse to procedures and it is affecting the overall outcome of things. What I have also observed lately is that nobody cares, not even for their neighbours. Sometimes, I wonder if the future generation could still live the way we lived in the past where genuine love reigned and everyone was their brother’s keeper.

However, another difference between my youthful days and now is that life has been made easy. Because of the way things have been made easy, they cannot face harsh conditions anymore. Even as simple as a clap or laugh, there are instruments to produce the sounds without one stressing oneself. There is a huge gap between when people did things naturally and now that things are done in the digital age. Again, this digital age has come with a lot of artificial things and that has affected us because we now also lead artificial lives. People’s behaviours are no longer real.

How would you assess the state of the nation?

We are moving in the wrong direction. Nigeria is not progressing. Lately, we have been rotating in one circle. If you listen to radio, watch television and read comments on social media, you will weep for the country because we do not seem to be making progress in terms of development. The Federal Government and the state governors are sick. It is obvious that they lack the vision to lead us in the right direction. Go to the markets and you see people who ought to be working becoming market men and women because of unemployment. People are suffering.  Some governors owe workers more than 10 months’ salaries, how do they expect these workers to survive? Look at the recent bailout funds given to states to offset salaries. Most of the governors diverted the funds to other areas. No electricity supply in many cities. Instead of progressing as a nation, we are retrogressing. We are going back to the Stone Age. We can still make things better for this country. Those leaders who travel out regularly should domesticate the leadership pattern of the leaders of those countries they like to visit.

Tell us about your marital life.

I have 13 children but one died. I had two relationships in the past but I finally got married to my present wife, Florence, and we have been together for 36 years now. My wife is a very quiet woman who is not just a wife but a mother who cares for everybody.

What are your regrets in life?